CityWalk has seen a major transformation happen at the breakneck speed that only Universal can accomplish. Over the past three years, new entertainment options have been added (Hollywood Drive-In Golf), old venues have been given the sleek and modern touch (Universal Studios Store and Starbucks), and a whole bevy of new restaurants have been unfurled (ranging from The Hot Dog Hall of Fame and Antojitos Authentic Mexican Food to The Cowifsh Sushi Burger Bar and Cold Stone Creamery). And, most impressive yet, there’s still several more dining options on the way, including the almost-open NBC Sports Grill & Brew and a rumored dessert venue.

Still, despite this nearly-complete makeover, there’s always room for extra experiences to be snuck in; Universal still has quite a way to go before it is representing most of the important entertainment bases, let alone competing with the diversity of options that Disney is lining up for its imminent Disney Springs.

With this in mind, lets look at some ideas of what Universal should be keeping its eye on for the immediate future. Whether culinary or retail-oriented, there’s one common denominator linking all our suggestions: a special uniqueness which would help differentiate these offerings from everything already in Orlando. The below suggestions would also help draw a distinction between what is largely being called CityWalk 2.0 from Disney Springs.

You should know that the below are a wishlist of things that I think would add to the already great offerings at CityWalk. Similar to the post that Erin Foster wrote about Disney Springs, these are based on my opinion, not rumors.

Let’s get to the tasty stuff right in this first part, shall we?

Although largely overlooked by most tourists, my hometown of Cleveland, Ohio is remaking its gastronomical mark on the map with both famous chefs (hullo, Iron Chef Michael Symon!) and boutique chains that are both challenging and fun. It’s hard to think of anywhere better for Universal to turn to next (hey – the company did set its sights to North Carolina for The Cowfish, so anything’s possible, right?).

Melt is honestly one of the most creative gastronomical delights out there. The idea is simple: “gourmet” grilled cheese sandwiches that are stuffed with an almost literally unbelievable amount of ingredients on a constantly rotating menu (it changes on both a monthly and seasonal basis). Take the Parmageddon, which consists of a potato and onion pierogi, fresh Napa vodka kraut, sautéed onions, and sharp cheddar; the Monte Cristo, which features honey ham, smoked turkey, and Swiss and American cheeses which are all deep-fried and covered with powdered sugar and served with berry preserves for dipping; and, my personal favorite, the Backyard BBQ, which has thick-cut breaded onion rings, sweet barbeque sauce, sharp cheddar, and your choice of chicken, pork, or beef. It’s absolutely divine.

The other half of Melt’s savory equation is beer. The restaurant features approximately 150 at any given time, plus an additional two dozen on tap, making for a breadth and depth that is almost as impressive as its crazy food menu. (My personal favorite? The Honey Peach Kolcher, crafted at a neighboring brewery in an exceedingly tiny town.)

Not convinced yet? Here’s some more reasons for your consideration. The small chain (there’s seven locations throughout Central and Northeastern Ohio – and counting) started nine years ago and exploded in popularity in 2010, when it was featured on Food Network’s Diners, Drive-ins, and Dives (which showcases “fascinating and very unique restaurants” from all over the nation). Extraordinarily, the restaurant’s menu is extremely vegetarian-friendly; not only is there a decent-sized selection of veggie fare to begin with, but every single sandwich has a meatless version available, no matter how improbable it may seem. And, finally, the décor is positively funky, with hand-drawn caricatures of local celebrities (hey there, Ghoulardi!), a mish-mash of vintage seasonal decorations, and, in some locations, beautiful, bold retro tiled ceilings.

Eclectic doesn’t begin to cover it – which is precisely why it belongs in Universal Orlando.

On first glance, Harry Buffalo looks like any other sports bar: tons of televisions for the games (especially the Buckeyes); heaping helpings of burgers, wings, and loaded potato soup (yum!); and, of course, practically all the beer you could ever hope to imbibe, representing a surprisingly large cross-section of both domestic and imported brands (there’s approximately 23 on tap and four dozen overall, including a constantly-rotated seasonal selection). But looks, of course, can be deceiving. The big stand-out here comes from the little fact that Harry Buffalo serves both beef and bison, which is “leaner and meaner” than the cow alternative. Every single burger can be swapped between the two (or a vegetarian option, as well), and the ever-present buffalo serves as the main thrust of the décor along with the marketing (“come join the herd!”). Yes, it’s a small touch, but the effect it has on the dining experience – both in terms of ambiance and taste – can’t be overstated. And, in this way, Universal would be getting the best of both worlds: traditional, comfort food with a unique spin.

The icing on top of the bison cake, though, is the steady stream of special events that Harry Buffalo constantly rolls out. The seasons are celebrated in grand style, featuring a practically transformed restaurant (during the summers, sandals hang from overhead while a large indoor sand box – replete with dozens of shovels, buckets, and toy bulldozers – takes over a pretty good chunk of the floor), and, in between, there’s the obligatory country and karaoke nights. Seriously, be sure to stop by for their all-holidays-in-one party around the beginning of July – it’s not to be missed.

And I can say “be sure to stop by” because in addition to the seven Northeastern Ohio locations, there’s already one in Orlando – located at 129 West Church Street. Now there’s no excuse for not experiencing a little slice of bison heaven.

Let’s hop out of Cleveland for this last entry and jump over to one of the most diverse culinary cities in the world: San Francisco.

Bourbon and Branch is a throwback from the 1920s, when Prohibition was in effect and speakeasies were the order of the (underground) day. Patrons must make reservations before arriving, which is necessary for two little reasons: only two dozen or so customers are allowed in at any given hour, and a special code word is required for entry. When you arrive at the single unmarked door (between the unusual business hours of 6:00 pm and 2:00 am) and ring the doorbell, a peephole opens and your gracious hostess will ask for the code.

When you’re allowed in, you’re transported nearly 100 years back in time: the small, dimly-lit room is filled with period-specific décor, replete with a gramophone in the corner. The bartenders and waitresses are also dressed to fit the part, and rounding out the historic theming is a set of strictly-enforced rules: no cell phones, no cameras, no standing at the bar, and, of course, “please speak easy.” It’s remarkably effective at transporting you to a different epoch – and it also helps focus your small group’s attention on one another, engaging in that nearly lost art of conversation.

Bourbon and Branch is able to deliver such an authentic experience because, well, it’s actually situated in an old speakeasy that was in operation (illegally, of course) from 1921 to 1933. Obviously, should a sister location be constructed in CityWalk, it would lose this historical footnote, but Orlando is the city of magic and imagination – it wouldn’t be anything close to a fatal blow.

Indeed, such a well-themed environment practically begs to be replicated at Universal Orlando, and its extremely limited seating would make it a must-do, top-tier libation destination, something roughly along the lines of Disney’s (in)famous Club 33 over in Disneyland. This is precisely the sort of experience that would serve as the final feather in Universal’s cap.

Oh, yes – let’s not forget the drink menu itself. The bartenders head to the local market each and every day for fresh ingredients, which, in turn, goes a long way to determining what is on hand for that evening. In fact, there’s no traditional menu listed on the website; instead, Bourbon and Branch proudly boasts that “one of our goals is to expand your – and our – horizons with our cocktails as well as our selection of spirits. Come down and see us. We’ll be happy to pour you something you haven’t had but are sure to grow to love.” How can that not be irresistible?

Be sure to be on the look-out for part two shortly, when we’ll get into what stores we need to see in Universal CityWalk Orlando. 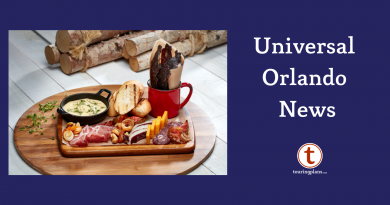 3 thoughts on “Six Experiences We Need at CityWalk, Part I”