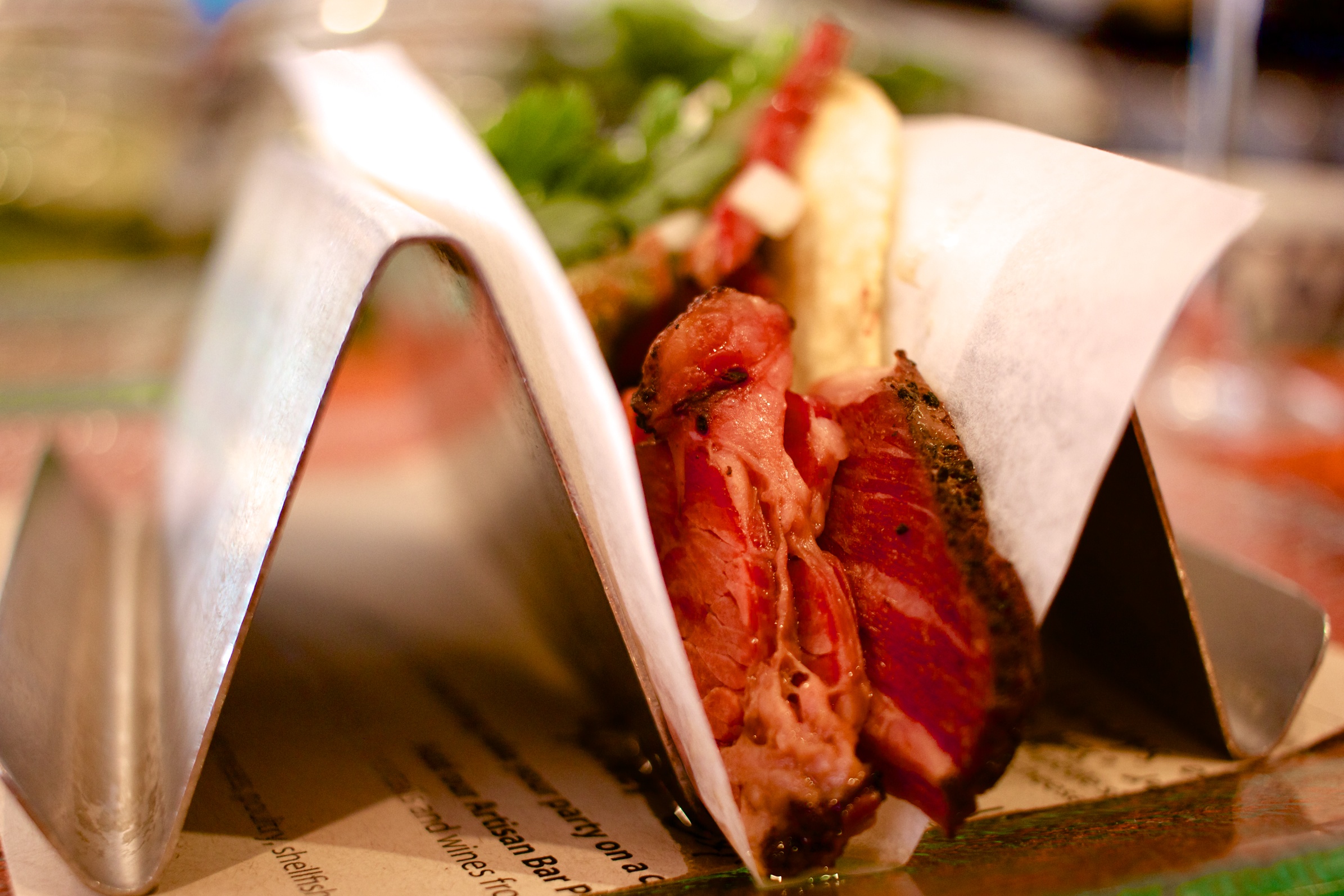 There are literally thousands of restaurants in Washington, D.C., even if we don’t count the fast food and chain dining. Trying to review every one of them is nearly impossible, but the Unofficial Guide to Washington, D.C. gives you a pretty good baseline. On my research trips to Washington I plan on eating at as many different places I can; some will be from the guide, some will not.

The two restaurants I tried on my most recent weekend in D.C. are representative of what I look for: simple and moderately priced. I enjoy food and the dining experience, but I still have a hard time justifying the price of the expensive fine dining found in a city like Washington. I prefer a simple dish, perfectly prepared in a casual environment. Since I think that’s something that’s more relatable than a $400 meal, I’ve decided to log my dining choices on the blog. There is presumably a lot that you don’t know about me, but one of the many things that I love is a good corned beef sandwich. I happened to be in the Dupont Circle area visiting the Phillips Collection (blog post upcoming on that) and noticed that there was a well-reviewed deli/restaurant nearby so that was an easy dinner choice to make. DGS Delicatessen has two locations–Fairfax, VA and the 1317 Connecticut Ave one I visited–and is named for the District Grocery Stores that used to blanket the area.

DGS naturally serves all manners of sandwiches from pastrami to burgers as well as entrees like chicken schnitzel and braised brisket. Their dinner menu is small, but that didn’t matter to me because I was there for one thing. Well, okay, two things because DGS also has a full bar with several interesting cocktails.

Like many city restaurants, the space is long and narrow with few actual tables. DGS makes good use of the space by adding an upstairs area and having some counter and bar seating, but it’s still a small place. The decor also isn’t particularly memorable, but the exposed brick and white-tile floor are meant to evoke an old deli so they get a few points for having a purpose (*points are useless and will not matter to any rating).

Anyway, I ordered a simple corned beef sandwich (on rye with mustard) and a Tenenbaumer, which is basically a Manhattan (rye whiskey, vermouth, and cardamom cordial). To be honest, my impression of the food and drink were somewhat like that of its surroundings: good, yet unmemorable.

I found the drink to be decent (and strong), but it was unbalanced by the cardamom, which was all I could taste from most sips. The sandwich was good, but I found the corned beef too thickly sliced. I know that’s a minor gripe, but I’ve had plenty of corned beef sandwiches from excellent delis and something that simple pushed it from an A to a B+ for me (*grades are also useless).

Overall I would recommend DGS Delicatessen, but only if you’re already interested in it. If you look at a menu and something sounds good it probably will be. If this isn’t your type of food, however, it’s not going to sway you either.

I’m not going to beat around the bush–mostly because I don’t know why I would be beating a bush, but I digress: I loved Oyamel. The dining reviewer for the aforementioned Unofficial Guide described it as “dedicated Mexican street food” which whetted my appetite enough to see for myself.

The chef Jose Andres place is huge by downtown D.C. standards; it takes up multiple storefronts. The inside is eclectic and downright weird as it mixes bright colors (blue on one side of the bar, orange on the other), butterflies, flowers, and scattered Día de Muertos imagery. This makes a little bit more sense knowing the story: Oyamel is a type of fir tree that lives in Mexico’s high altitudes and is the wintering home for the monarch butterfly. That doesn’t really matter though, because the effect is just plain fun–something that is often missing from high-quality restaurants.

I was there for brunch and I ordered two small dishes: a Taco de suadero (brisket) and Huevo enfrijolada Oaxacaqueño (egg, tortilla, bean puree, chorizo, and queso fresco). I enjoyed both, but the taco was exactly the wonderful simplicity that I adore about street food. The brisket was cooked perfectly, well seasoned, and lightly garnished and I wish they weren’t quite so pricey ($4.50 each) so I could have eaten 12 of them. The huevo was also very good, but it was mostly egg and beans and I was hoping for more chorizo. I think they were trying not to make it too spicy, but it wasn’t exactly what I thought it would be. I wouldn’t order it again, but not because of quality.

If you like Mexican food–real Mexican food–Oyamel (401 7th St NW) is probably a place you’ll want to check out.

That does it for my inaugural quick, unprofessional dining reviews of places I randomly ate in D.C. (working title). There will be more coming whether you want them to or not, but if you know of places in Washington that you’d like me to try I am all ears (not literally, I have exactly two ears).