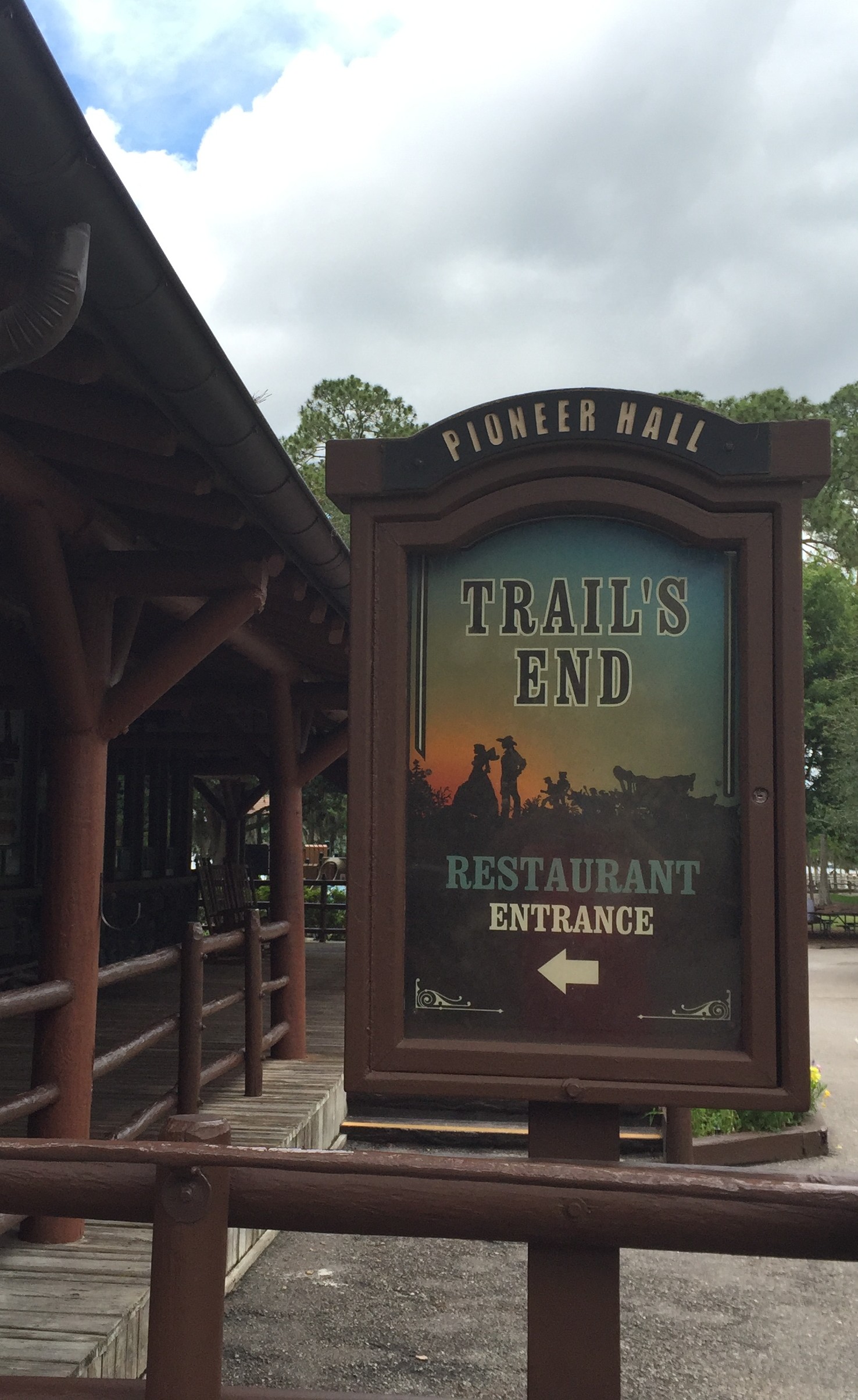 Long-time fans of Trail’s End may remember when it offered both a breakfast and lunch buffet. The trick was to get a dining reservation near the end of breakfast so that your first plate or two was breakfast food and the rest was lunch. Eventually, Disney decided to move Trail’s End to a la carte dining for lunch, and the world was suddenly a darker place for many. Time to come out of that dark place, because Trail’s End now offers a weekend brunch buffet from 7:30 AM to 2 PM daily. (And for those who love some of the unique offerings on the lunch menu, it will still be offered on weekdays.)

Part of the challenge with dining at Trail’s End, located at the Settlement part of Fort Wilderness (next to the Hoop De Doo Revue) is getting there. If you are driving, you have to park at the Outpost and take a Fort Wilderness internal bus to get to the Settlement. This means that you’ll want to arrive at Fort Wilderness at least a half hour before your dining reservation (and 45 minutes to an hour is ideal). From the Magic Kingdom, you can take a boat directly to the Settlement. From any other theme park, you’ll be dropped off at the Outpost and then still need to take an internal bus. But enough about logistics–let’s talk food.

We grabbed a dining reservation for 10:40, and when we got seated, we found that the “lunch” part of the buffet was already being served alongside the breakfast options. The price for the buffet is $23 for ages 10 and up, and $13 for 3-9 (prices include tax but not gratuity).  The price includes non-alcoholic beverages, including “moonshine juice” (the breakfast staple of orange, passion fruit, and guava juices). Adult beverages are also available for purchase. For the breakfast side of things, many of the foods are pretty standard Disney breakfast buffet. You’ve got Mickey waffles, bacon, eggs, and so on. There were a few unusual stand-outs, however. On the carving station, they had carved honey ham and carved slab bacon. There also was an amazing smoked beef hash, which was breakfast potatoes, peppers, onions, and huge chunks of smoked beef brisket. Other offerings on the hot breakfast include breakfast pizza, grits, biscuits and gravy, eggs benedict, and hash browns. On the menu outside, it mentioned made-to-order omelets, but there wasn’t a specific place set up for it that I could tell. That said, with all the foods available, I couldn’t have eaten an omelet if I tried. The “cold offerings” were heavily slanted towards brunch offerings with salads, fruit, peel and eat shrimp, and smoked salmon. Although the food was delicious and fresh, the kitchen did seem to have a challenge keeping Mickey waffles in stock. In addition to regular syrup, there was a pecan praline topping that tasted like a melted pecan pie. It was delicious on the waffles, but consider putting some on the apple cobbler from the dessert area.

Dessert area? You bet, partner! If red velvet cake pancakes can be a thing for breakfast, why not red velvet cake itself? (That’s my story and I’m sticking to it.) The dessert area included S’mores bites (which were essentially marshmallows held together with graham cracker crumbles and chocokate), cookies, and more “normal” breakfast “desserts”, such as pastries, doughnut holes, and sticky buns. But the winner for me was the hot apple cobbler. Overall, Trail’s End would be a rough brunch to have if you’re trying to make the most out of a park day, but the very nature of Fort Wilderness is geared around kicking back and embracing the slow life. The food was all delicious, and our server was on the ball about bringing drink refills and clearing plates without making us feel rushed to vacate the table. With the great variety of foods offered for the breakfast and lunch side of things, brunch is well worth the trip to Fort Wilderness, and a great value for the foods offered.