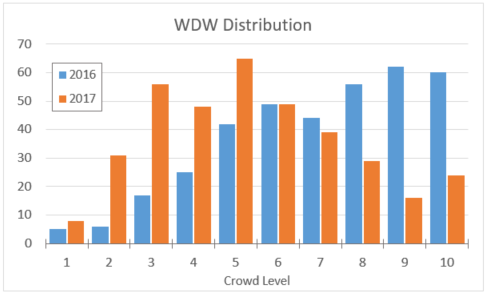 night we will be pushing an update to the Walt Disney World for dates starting August 1, 2016. The changes in the crowd level reflect changes in our wait time attraction predictions. The new predictions reflect changes due to park hours, school schedules, and recent trends of observed wait times. One of the more interesting impact of the school schedules will occur during Christmas break: This year Christmas Eve and New Year’s Eve fall on Saturdays. While some school districts are off the last two weeks of December, others are taking the last week of December and the first week of January. This will extend the holiday crowds over three weeks instead of the usual two weeks. We are still learning the impact of the increased capacity at Soarin and Toy Story Midway Mania, Frozen moving into Norway, and nighttime hours at the Animal Kingdom. One thing we are seeing is a general increase in crowd levels at Hollywood Studios. With many of the minor attractions being closed, the remaining attractions are seeing an increase in wait times which brings up our crowd levels. With the back half of Hollywood Studios being closed, the park also feels more crowded according to our users. August has some small tweaks–any changes being due to changes in park hours and crowd flow. We expect the bulk of summer crowds to taper off by August 28 and September will have its usual low crowds with Labor Day weekend being the busiest weekend.

One of the questions we often get is the impact Mickey’s Not So Scary Halloween Party has on crowd levels. Guests without park hopper tickets stay away from the Magic Kingdom on party days, which causes party days to be lower and days without a party to be more crowded at the Magic Kingdom.

Excluding Thanksgiving week, November will have low to moderate crowds. Early December crowd levels have increased with some 8s and 9s showing up at the Magic Kingdom. With Christmas crowds starting to arrive on December 17, there is less time for locals to get their holiday cheer before the holiday invasion.

In general, we have seen an increase in wait times even with Disney saying that attendance is down. We could be wrong, but our suspicion is that staff cuts and reduced ride capacity are the explanation of the higher wait times. We have every reason to think that this will continue for the foreseeable future. For 2017, we are adjusting the scale so that the average crowd level falls between 5 and 6. The 2016 average is over 7, and the distribution is skewed. As an example, an average wait time of 65 minutes at Splash Mountain is currently a “10”. In 2017, a 65 minute wait will be a “9”. It will take an average wait of 70 minutes at Splash Mountain to qualify as a “10” in 2017.