The February 2020 Crowd Calendar update is now live. So far 2020 is showing increased crowds at Walt Disney World. We expect this trend will continue through spring break. We will be tracking trends and make the necessary adjustments as needed. 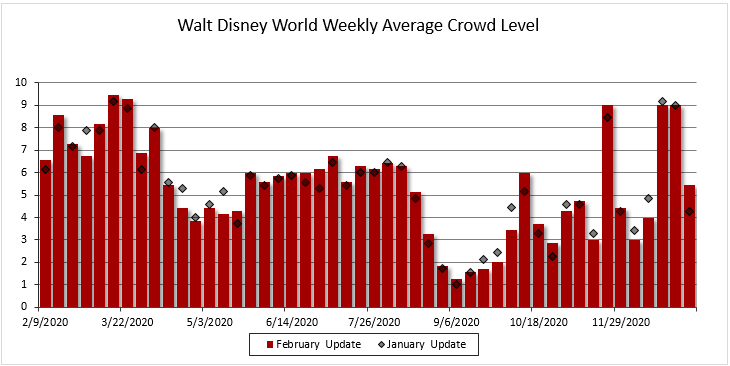 The weeks of Presidents’ Day (February 15-23) and Mardi Gras (February 22-29) are popular times for many school districts to take a break. Luckily, the two holidays are on different weeks in 2020, and that will help spread out the crowds. February 22 and 23, Disney’s Hollywood Studios crowd level increased by 3 points. This will be a busy weekend as it falls between Presidents’ Day and Mardi Gras. Epcot’s crowd level on February 22 also increased by three points. The increase in crowd levels is more in line with historic crowd levels.

On February 19 Millennium Falcon: Smugglers Run will become a top-tier FastPass+ attraction. There is a dark side of FastPass+: the more people who get to “skip the line” with FastPass+, the longer waits will be in the standby line. We expect wait times for Millennium Falcon to go up 50-75%.

The large increase in crowd levels at Disney’s Hollywood Studio is mainly driven by the opening of Mickey & Minnie’s Runaway Railway ride, which opens on March 4, 2020. The Magic Kingdom crowd level decreased by 3 points on April 27 since the park closes earlier than we expected.

May does not have any large changes in crowd levels

Fall and Winter crowd levels will be tentative until we get crucial data. The holiday parties and other after-hour events have a big effect on parks’ crowd levels. We are also starting to collect school schedules for 2020-2021.