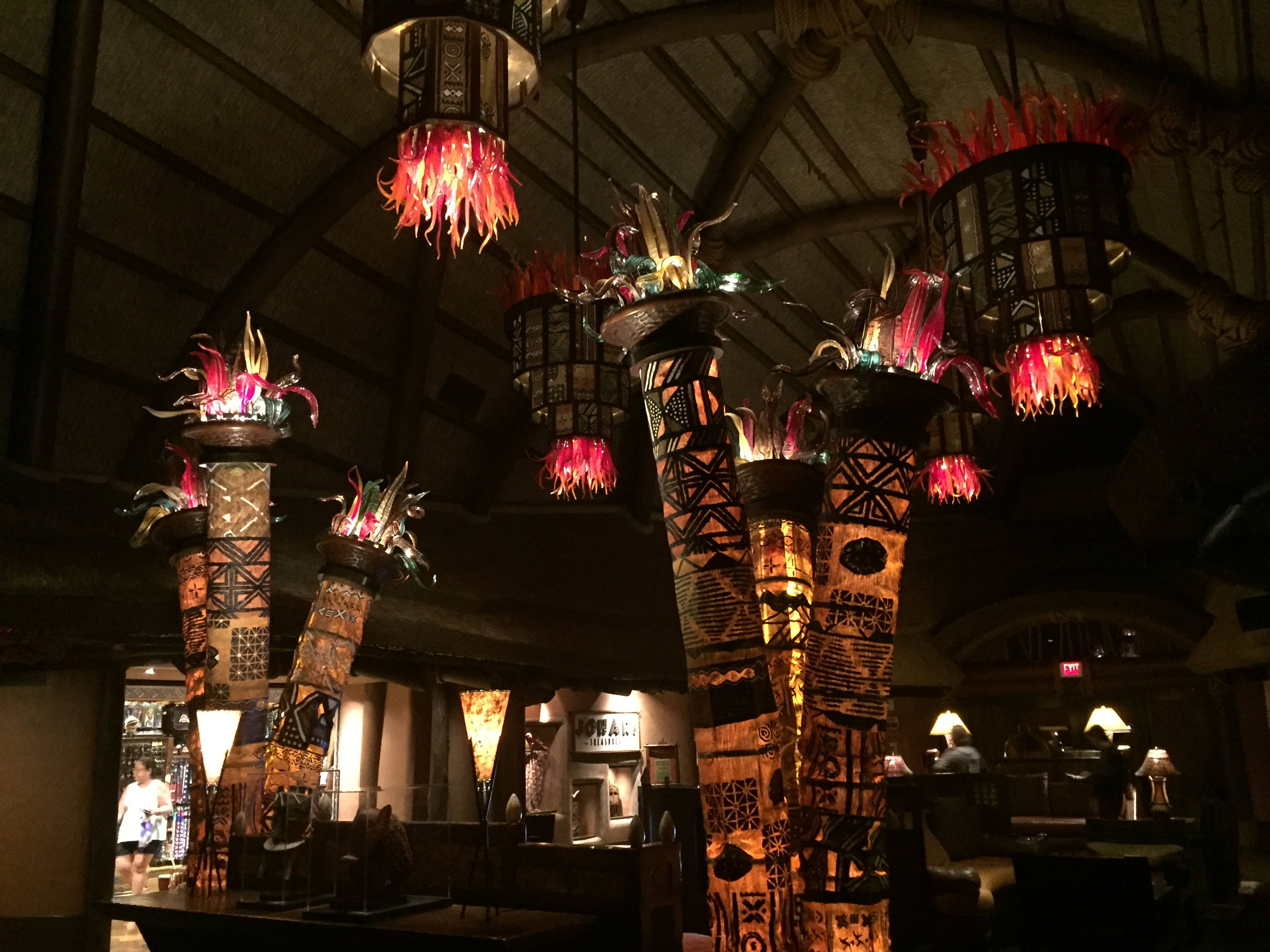 When we lived in Maryland, my husband and I bought ownership in DVC as a wedding present to ourselves. Now that we live right around the corner from Walt Disney World, people have asked if we are thinking of selling. Originally, we went with enough points for us to do a two-bedroom unit for one week out of the year (more or less). We’ve added on since then, but our needs have changed. Gone are week-long stays at Walt Disney World. Instead, we do DVC stays for a single night here and there, allowing us to use resort amenities on our check in and check out day. It provides a nice change of pace, especially with company in town. With my mother-in-law in town for the week, we booked a one-night stay at Animal Kingdom Villas: Kidani Village, just as a way to take it easy somewhere other than home.

My husband had checked us in on his way to work, and had an option of taking a room right away that was at the far end of Kidani or wait for a room that was right off the lobby. As the rest of us hadn’t planned on arriving until mid-afternoon, we decided to wait. At 2:00 PM, we arrived, and since our room wasn’t ready, we headed for Kidani’s Community Hall. Even if you’re not a DVC member, you can still make use of some of the facilities in the Community Hall. At Kidani, there is a pool table, board games, video games, and more. There’s also a selection of arts and crafts that you can do for a small fee. My daughter fell in love with the bobble head animals, and soon was happily coloring her new bobblehead cat named Sugarcane. Shortly after she finished, we got the text that our room was ready. While my daughter and mother-in-law oohed and aahed about the animals visible from the balcony, I went to get the luggage from the car. Although it may not be aesthetically as pleasing as other places to park, I love parking at Kidani because it’s almost all in the shade and usually you can get a parking space close to the elevator nearest your room. When I got back to the room, there were plenty of animals wandering by. Lots of the usual suspects made their appearance, from giraffe to antelope and ostrich to zebra. And, of course, the very rare and exotic…bunny. (Does anyone else have kids who are ho-hum about the exotic animals but go crazy when they see a squirrel, rabbit, or duck??) My favorites are always the giraffe, though. So here’s another giraffe photo. The worst of the heat of the day had passed, so we headed down to the Samawati Springs Pool. The pool area has a fantastic water playground area. As well as the very cool zero-entry pool. (Special thanks to my husband for getting me a Joto case for my phone so that I could get in the pool without worrying about the phone getting wet.) Unfortunately, weather started building up and the pool area had a huge amount of bees everywhere, so we didn’t stay for as long as we might have liked. We headed back to the room, got changed, and when my husband arrived, it was time for dinner. For many years, Sanaa has been a secret favor of mine, mostly for the bread service. There are so many other items on the menu that have become “old favorites” of mine as well, but you can’t go wrong when this comes out to your table. (And yes, it was impossible to snap a quick picture before people started digging in.) There were several new-to-us items on the menu, so instead of ordering our usual choices, my husband and I picked something new. I went with the Braaivleis–South African Braai Sample Plate (trio of grilled meats with seasonal accompaniments). The three meats were a very mild sausage on some “crushed potatoes”, some of the best sliced beef that I’ve had, and a lamb chop that reminded me a lot of the one served during Food and Wine. The broccolini and token vegetable accompaniments were wonderful, but this dish is really all about the grilled meats.

My husband went with the “Traditional Sosatie”. It was described as “Braai lamb with apricots, squash, bacon, cashews, and goat cheese.” The dish was beautifully presented, and not as heavy or filling as other items that we’ve had at Sanaa.

Once the meal was finished, I wanted to give dessert a try. My favorite dessert (the chai crème pudding) is no longer on the menu, so I opted for its substitute: Tapioca Pudding with Chai Spiced Berries. I was surprised by the dessert with a couple things. First, the description made it sound like the berries were “chai spiced”, but they’re just regular berries. The chai flavor actually seems to come from the berry sauce that came in the dish. Second, having grown up in the era of plastic tapioca pudding cups, I didn’t expect a lot from this dessert, but everything about it was so flavorful and fresh tasting. After looking around the room to see who might be listening, I whispered “Don’t tell anyone, but I think I like this better than the chai crème pudding.” Thankfully, I don’t think anyone knows that I feel that way. My secret is safe. In addition to being beautiful, this was probably the most rich dessert I’ve ever eaten at Walt Disney World. It took three adults two days to finish it.

Once we go back to the room, I finished up some work and my mother-in-law relaxed a bit while my husband took Lily for some more pool time. It was then time to start winding down for the night. While Lily was getting ready for bed, my husband and I left her with her grandmother and we headed down to grab an evening nightcap. My husband had the Fireball Cocktail (too strong and cinnamon-laden for me). And I had the Raspberry-Ginger Mojito (with Bacardi Razz instead of vodka, because I don’t get how you can call it a mojito with vodka…). On the way back, I had to stop and admire the beauty of the lobby at night. For my daughter, school was starting on Monday, and my husband and I both had to work the next day, but for a moment, it was just so tranquil and vacation-like, even though it was just for one evening. Will we ever sell our DVC points? Who knows. But for now, we still get good use out of it for these little staycations. This little slice of rest and relaxation does help make for the Best Week Ever.

And if that isn’t enough, waking up to giraffes outside makes for a great start to the day.