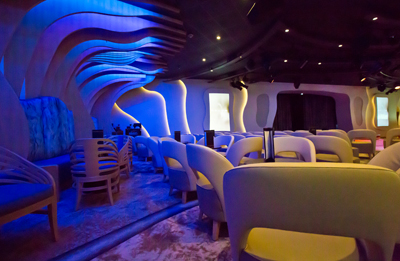 What a Wonder-ful trip I just had on the new Disney Wonder!  Are you Wonder-ing how many Wonder jokes I can make?  Well I’m done.  That got annoying after two!  Am I right?

But seriously, I love it when Disney updates their ships.  It’s so fun to board a ship that you feel like you know every inch of, only to discover it’s even better than before.  The Disney Magic re-imagining blew me away, and while the Wonder had very similar upgrades, it was both well done and about time.  Here are 10 of the best changes! 1. Tiana’s Place – Tiana’s had big hype going in and it did not disappoint! Parrot Cay is a distant memory of the classic ships and Tiana’s has taken over. Tiana’s is a southern-style restaurant inspired by the heroine of “Princess and the Frog” and her Louisiana bayou home.  The menu was spectacular and very different from the other restaurants.  Beignets.  Need I say more?  Yes, I probably should.  At least one of my travelling companions said the beignets are one of the finest dishes Disney has ever served on a ship.  Additionally, the entrees include Cajun spiced sea bass, shrimp jambalaya, and pork tenderloin on an andouille sausage stew.  While you’re enjoying stuffing your face, there’s live (!) music, Mardi Gras beads, and a celebration/parade with Tiana, her friends, your servers, and even you!  It’s a fun, festive, loud atmosphere—and one of my favorite restaurants on any of the ships!

2. Frozen, A Musical Spectacular – Love or hate Frozen, this new show is worth your time. The special effects are excellent, and the performers just nailed it—even the incredibly difficult “Let It Go” vocals. And oh my goodness, the puppets!  The puppetry work is so well done, and some of the puppets are so cute you just want to hug them and then take them home.  The costumes, the scenery, the choreography, loved it.  All of it. 3. Oceaneer Club – Disney’s Oceaneer Club isn’t new of course, but wow is it redone. The Magic got the Avengers, the Dream got Star Wars, and the Wonder now has Marvel Super Hero Academy. Marvel—the other great franchise owned by Disney!  The Marvel Super Hero Academy invites children to come and train with some of their favorite Super Heroes like Spider-Man, Captain America, and Black Widow.  Other Super Heroes join in via a large Digital Screen.  I can see grown men children spending hours here.  Don’t drop your kid’s off and expect to pick them up anytime soon!  Disney also replicated the very well done Andy’s Room from the Disney Magic.  For those who aren’t as enthralled with Super Heroes or Toy Story, there’s also a new room inspired by another movie that won’t surprise you—Frozen.  Anna and Elsa drop by of course, and Olaf himself leads the kids in fun summer games.  It’s his favorite season after all! 4. Cabanas – Beach Blanket Buffet is no more, and all four ships now have Cabanas. Cabanas is set up so much better than the original buffets on the classic ships. There’s more seating (even up on the 10th deck behind Palo), and instead of one long, slow moving buffet line, there are multiple food stations to choose from.  There’s no reason to wait for the person in front of you to fill their plate with lettuce when all you really want is a hamburger!  I love the food stations and I am thrilled that the Wonder has finally caught up!

5. Water Features – The classic ships were built with three small pool areas, and everyone realized that just wasn’t enough on a family ship. The Fantasy and Dream took aim at fixing that problem, and with limited space, they added what they could. The Disney Magic added a feature slide and some other water play areas when it was re-imagined.  While the Disney Wonder didn’t add an AquaDuck or AquaDunk, it did duplicate the Twist and Spout slide from the Magic.  It’s a very tame, but fun slide aimed at children, although anyone can ride.  The AquaLab is a great pool and interactive splash area duplicated from the Magic.  The toddler water play area on the classic ships was entirely too small, and Dory’s Reef has corrected that.  It’s bright, fun, and enclosed to help parents keep better track of those small, slippery, fast-moving little bodies. 6. After Hours – The nightclub area on the Disney Wonder was also redone and is now called After Hours. Crown & Fin Pub is the highlight here, taking over the large space formally occupied by Diversions. Crown & Fin is a nod to an English Pub with artwork and details reminiscent of various Disney films set in London.  For those beer lovers out there, there are plenty of British and specialty beers to choose from.  The very well themed Cadillac Lounge didn’t go away, thankfully.  It was updated with a great new entrance, and shiny new details.  WaveBands was definitely looking dated and it is now a beautiful space called Azure.  Azure has some gorgeous woodwork and seating which evokes a beautiful “under the sea” feeling, and it is much brighter than its sister space, Fathoms, on the Disney Magic.  It’s a great place to spend your evenings. 7. D Lounge – D Lounge can now be found on all four ships, and while it varies in size based on the ship, it’s a nice open space for the family activities that take place there. On the Wonder it’s in the space formally known as Studio Sea, which was dark and in need of some new theming. D Lounge fits the bill and I don’t mind at all that it’s on all four!  There’s a great new, large entrance on the side as well. 9. Senses Spa – The Wonder is the last of the ships to convert over to Senses Spa, and has also added the Chill Teen Spa for teenagers to be spoiled. The updated spa is a gorgeous, tranquil place. This is where you want to be if you want to get away and be pampered.

10. Concierge Lounge – While the Wonder and Magic had concierge rooms from day one, they weren’t designed with a dedicated lounge or sundeck for concierge guests. The new lounge is a wonderful, bright, open space. It’s where you will always find a friendly face wanting to meet your every need.  No more waiting in line at guest services, just take care of it in the lounge.  Do you want upgraded coffee in the mornings, or canned soda all day long?  The lounge.  Complimentary alcohol in the evenings?  Lounge!  I love the lounge when I do get to stay concierge, and I’m so glad they found space for it!  The new concierge sundeck on the Wonder is probably my favorite out of the four.  It’s large with plenty of seating, and you can see out of it with great 270-degree views starboard, port, and forward (unlike the sundecks on the Dream and Fantasy).  It will be a huge hit during Alaska cruises going up Tracy Arm or on the Panama Canal transit—and, it also has an amazing view of ship’s fireworks!

Bonus – My other favorite thing about the beautiful new Disney Wonder?  Prices!  The Wonder has some good deals out there.  I’m not talking about Alaska prices, but check out some of the other prices out of Galveston and Miami.  Compare them to the Dream and Fantasy, and you’ll be pleasantly surprised!  It may be time for you to see this new Wonder for yourself!

Do you have any questions about the Wonder?  Are there any other new features you’ve seen or read about that I missed?  Let me know in the comments!

2 thoughts on “10 Things I love About the New Disney Wonder!”