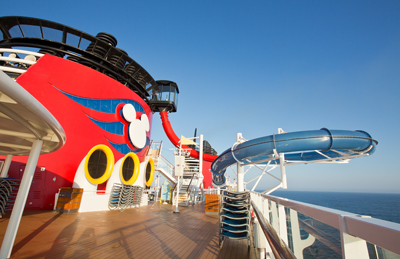 2017 is coming quick!  Have you booked a cruise yet?  Well get on that!  Of course, I’m always ready for new Disney Cruise Line itineraries/features/enhancements, and here are the top 10 in 2017 you will want to get ready for as well! 1. Fantasy Refurb – Refurb may be too big of a word. The Disney Fantasy has a short dry dock in May of 2017. While I certainly don’t expect a reimagining on the scale of what the Wonder and Magic have recently gone through, there should be some updates.  I’d put money down that the Oceaneer Club will be re-themed.  Among other additions, the Dream has the Millennium Falcon from Star Wars, the Magic has Marvel’s Avengers Academy, and the Wonder now has a Marvel Super Hero Academy.  Trust me, the Fantasy is going to get something!  Harry Potter?  Ha!  Just kidding.  I’d also suspect a sweet shop along the lines of Vanellope’s on the Dream.  Something is coming!  Can’t wait to see what!

2. Double Dips on the Fantasy – The Fantasy has a couple of double dips in store in 2017! In case you have no idea what that means and thought I just referenced ice cream, which would not be out of the question, a double dip is an itinerary with two stops at Castaway Cay! That’s almost better than ice cream!  Double Dips are thrown in from time to time on the Disney Dream, but this is new for the Fantasy.  The Christmas sailing on December 23, 2017 is a double dip.  How great of a Christmas present is that?  Recently Disney also quietly announced a 3-night double dip on the Fantasy in May right at the end of the scheduled dry dock.  That never happens.  The double dip or the fact that the Fantasy is doing a 3-night.  Disney must be very confident that they have plenty of time for whatever they have planned for the dry dock, and decided they were leaving some money on the table.  Disney. Does. Not. Leave money on the table.  If you’d like to be the first onboard to see a spruced up Disney Fantasy, or just want the fun of a shorter cruise on the Disney Fantasy that’s going to Castaway Cay twice, this is the sailing for you! 3. Marvel Cruises – In addition to the Star Wars sailings in the winter, Disney announced Marvel sailings in the fall! Select sailings on the Disney Magic out of New York in October and November will include a special Marvel Day at Sea. According to Disney, there will be a deck party, photo ops, merchandise, themed food and beverages, movie marathons, and “the largest collection of Marvel Super Heroes and villains ever assembled on a cruise ship.”  Even though that number could probably be 3 and be the “largest ever assembled on a cruise ship”, we’ll assume it’s actually a very big number!  Oh, and see #5 below for my thoughts on cruises to the Canadian Maritimes!

4. Mexican Riviera – In some great news for West Coast residents, Disney is going back to the Mexican Riviera for a longer period of time than they’ve done in a while. In the fall of 2017, after a 4-night repositioning cruise from Vancouver to San Diego, there will be several 2-, 3-, 4-, 5- AND 7-night sailings out of San Diego! Lots of great options. 5. 7-Night Canada – Disney added a 7-night Canadian sailing out of New York in the fall, as well as a couple of new ports – Charlottetown, Prince Edward Island and Bar Harbor, Maine. We absolutely loved our Canadian cruise out of New York City a few years ago (and getting up at 5:00 AM as we sailed back into the Big Apple was one of the most beautiful urban scenes I’ve ever seen), and longer cruises are always better. Bar Harbor is a gorgeous and welcome addition to itinerary, and while I haven’t been to Charlottetown, my understanding is that it’s a great port as well.  Add that to the ability to drive to your cruise for a large percentage of the U.S. population, and these are some great cruises!

6. Europe – In perhaps the least surprising news of 2017, Disney is returning to Europe in the summer again. Considering Europe itineraries are among my favorite cruises, this is in no way a bad thing. After the success of the British Isles itinerary in 2016, there will be another in 2017 (and, if you are considering booking this itinerary, I have two words for you—do it!).  Norway itineraries have also become very popular and will be returning.  There are some great Northern European sailings as well.  One of Disney’s ports with the highest guest satisfaction ratings is Reykjavik, Iceland and it pops up again with an overnight stay on a great 11-night sailing from Dover.  Disney will finish out the summer with 5-, 7- and 10-night Mediterranean sailings out of Barcelona.  Sign me up for any and all of these! 7. New Disney Wonder – While the Disney Wonder re-imagining was finished in early November of 2016, not very many guest have experienced it yet! Can you say new Frozen stage show and new Tiana’s Place restaurant? Well, 2017 is your chance to experience them.  After the Wonder leaves Galveston in early January, there will be several 3- and 4-night Bahamian sailings out of Port Canaveral before leaving for Alaska and then the West Coast in the fall.  She’s sailing out of three corners of the U.S.!  She’s close to almost everyone!  Sorry, landlocked states.  Can’t do much about that.

8. Alaska – Oops, I was wrong! A return to Alaska is probably the least surprising announcement. Alaska!  Yay!  There are 5-, 7-, and 9-night sailings with two new ports – a stop in Icy Strait Point and a visit to Hubbard Glacier on select itineraries!  A good rule to live by – the more glaciers the better.  The other good news is that the Panama Canal expansion is finished, and the newly reimagined Wonder will fit through it (ever wonder why the Wonder refurb had to wait until 2016?).  So, this summer’s Alaska cruisers will be on a beautifully updated ship, enjoying those new features I mentioned in #7.  It’s a great time to go to Alaska—one of our families’ favorite itineraries we’ve ever been on! 9. 10- and 11-Night Fantasy Sailings – The Fantasy is mixing it up some more in 2017 with two longer itineraries in June. These are two Southern Caribbean sailings out of Port Canaveral. The first is an 11-night sailing on June 17th, the second is a 10-night sailing on June 28th.  You can visit places like Aruba, Barbados, Martinique, St. Kitts, the British Virgin Islands, Curacao, and a little place in the Bahamas called Castaway Cay.  As I said above, longer is always better for me, and seeing as how the Fantasy is my favorite ship, a longer sailing on the Fantasy is the best of both worlds.

10. 5-Night Dream Sailings – The Dream likes to throw in 5-night sailings every now and again, and the summer of 2017 is no exception. While longer is still better, a 5-night sailing is a great length, and there are 6 of them in June and July. I will take any length cruise without complaining, but when you can’t get away for a whole week (or more) a 3-night is toooooo short, a 4-night is better, but a 5-night is just right!  And bonus!  The 5-night sailings in 2017 are all double dips.

Is there anything you’re looking forward to in 2017 with Disney Cruise Line? 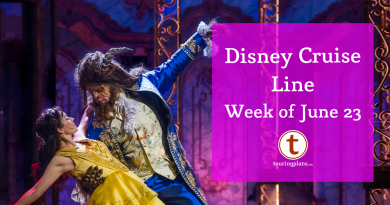 The Magic, The Memories, and Merch! November 2015 Photo Report of the Disney Outlet Store