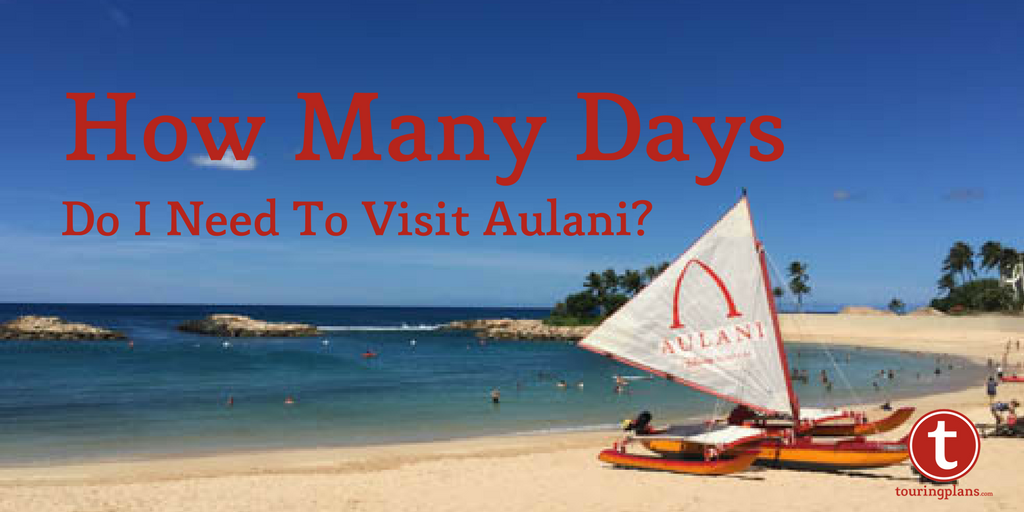 Do you have a Disney Bucket List? Aulani, a Disney Resort and Spa (hereafter just called “Aulani”), is a fantastic resort and something one many people’s lists. One of three Disney resorts not attached to a theme park, it is the only one not in the continental U.S. Because there’s no theme park to visit, one question that inevitably  comes up for us is “how many days do I need to visit Aulani?”

Visiting Aulani is like cruising Disney Cruise Line. You need to make time to take everything in. So how long is that? The pithy answer is “as long as you can take.” Why is it pithy? Because there are some considerations  and outside factors that will have a huge influence on how long you can stay.

It takes a long time to get to Hawaii. Best case, you’re flying non-stop from LA, but that’s still going to take nearly 6 hours. If you’re flying from the East coast, you’re looking at more than 11 hours non-stop or one or more connections that will push your travel time into 16+ hours on planes or in airports. After you get there, you’ll be three hours earlier (West coast) or six hours earlier (East coast). That may not seem so bad now, but you’ll remember this when you’re walking around the resort at 4AM looking for food on your first day. Jet lag is a harsh mistress and it will take you at least a couple of days to get on local time. Not only do you need to allow time to arrive and adjust, but you need to leave time on the end for getting home and being ready to go back to work or school. When I stayed at Aulani, I took the long route, the Disney Wonder from Vancouver, a 10-night cruise. Sadly that cruise isn’t offered in 2017 and 2018, but I’ll tell you we were far from the only people who got off the Wonder and went straight to Aulani.

Room cost. If you think you’ll “just rent points,” I wish you luck. As a DVC member who hasn’t been able to book at Aulani using my own points within the 7 month window, I have found booking with points difficult. If you choose to use a 3rd party to book, you’ll find there is a surcharge for Aulani (and other in-demand DVC properties) during their home resort window (7 to 11 months out). If you plan to pay in cash, be prepared to open your wallet. Aulani does offer book 4 nights, get the 5th free, and similar deals, but these are discounts on already expensive rooms. Me, I like one-bedroom villas. And a view of the ocean. The rack rate for my last trip including tax was more than $1000/night. And, by the way, that’s low season. Even if I’d been able to spend a week there after already traveling 2 and a half weeks, I don’t have $7000 to spend on a hotel room.

Food cost. The food at Aulani is great. But resort food will always be expensive. Count on spending at least $15 per person per meal if you eat at their counter service restaurants, and far more than that if you dine at the character buffet or the upscale restaurant. You can alleviate some of this by dining across the street or by picking up groceries, but food is going to be a large part of your vacation budget, which will affect the amount of time you’ll be able to stay at Aulani. My favorite treat in Hawaii is to head to the nearest Foodland, the only place I’ve ever seen a kimchee bar. Or if that’s not your thing, grab some butter mochi or just check out all the different flavors of Spam.

Disney has menus on its Aulani dining pages. Quick service dining is slightly more expensive than you’ll see at Walt Disney World. The set menu for two at ‘Ama’Ama (the resort’s premier dining location) will set you back $140 plus beverages and gratuity. On the other hand, everything does taste better in Hawaii.

How much of the rest of Oahu do you want to see?

Hawaii is a beautiful place. And it would truly be a shame to fly all the way out there and never leave your resort. Not that you couldn’t, Aulani has so much to do that it is a destination in itself. But if you’re planning your first or only trip to the 50th state, you really should get out a bit. Diamond Head, the North Shore, Waikiki … these are all on my don’t miss list for Oahu. The thing is – these will take more time that you think. Honolulu is a large employment center on an island that really only has 2 main roads – the East-West H1 and the North-South H2. There are traffic jams. Visiting Diamond Head or Waikiki will take the better part of a day. The North Shore somewhat less, but leave early to avoid at least some of the traffic – especially on weekends, when you’ll find cars at a standstill going through Haleiwa Town.

Do you want to see any other islands? Aulani and Ko’Olina are beautiful. They are great vacation destinations. They are also about as Hawaiian as the Polynesian Resort is South Seas. It is what it is, but if you really want to see Hawaii, Oahu isn’t the place to do it. Maui has some of greatest natural beauty you’ll encounter anywhere. And Hawaii (the Big Island) is where you’ll find active volcanos. Oahu is where you’ll find the Royal Hawaiian Shopping center, which if you’re into retail therapy is definitely worth a visit but is the same shopping experience you’ll get in any major city on the mainland.

Once you’ve answered all these questions, there’s still the matter of just experiencing Aulani itself. And, boy, is there a lot to do there. Here are my recommendations:

Walking around and taking it all in – Even before you check in, you start to experience Aulani.  As soon as I walked into the lobby and received my lei greeting (nice touch), I was ready to check everything out. There is so much detailing to take in. Give yourself a good couple of hour to walk around when you arrive to look around, and think “yes, I’m in Hawaii.”

Beach time – Aulani has a beautiful beach on a man-made lagoon. You can rent paddle boards and all manner of beach items, snorkel in the lagoon, or just enjoy the sand. Plan this for early in the day as the winds really pick up as evening approaches. Plan to be out at least a few hours each day you’re there.

Rainbow Reef (extra fee) – Imagine the Shark Reef (RIP) at Typhoon Lagoon but better and without the feeling that you’re being herded through. This is what the Rainbow Reef is like. Allow 30 minutes one day you’re there and check the schedule ahead of time.

Pool time – Aulani’s pool are next level bananas. You say you like Stormalong Bay? HA! Try out Aulani’s pools with body and raft slides, and the lazy river, and you’ll see why this is the Disney pool complex to beat.

Menehune Adventure Trail – We loved this and were really disappointed that we didn’t try it until the last night. The Adventure Trail is like Agent P’s World Showcase Adventure but played around the resort grounds. There are multiple storylines. Allow 45 minutes per story. We found that some of the effects were extra cool after sundown, but you do need to return your device to the Community Hall by 8PM, so schedule accordingly. You can spread out your adventure over multiple days with the same account so you don’t repeat anything you’ve already done.

Laniwai Spa (extra fee) – Laniwai is worth a visit if you’re at all into spas. My recommendation is to book a treatment that includes the Vitality Baths, an outdoor soaking and shower area. Sadly the baths can’t be booked a la carte. Laniwai is nicer than the Senses spas at the Grand Floridian and Saratoga Springs, which we rate very highly. They offer services for solos, couples, and something called ‘Ohana treatments where they invite you to “unwind with loved ones.” In my case, this would be alone, but that’s just me. Here is a link to the most current price and services list at Laniwai.

Shopping – Do you like Duffy? Do you dream of the Shelly Mae backpack and still regret not buying despite knowing you’d never actually carry it (oh wait, that’s me). Give yourself an hour to check out the resort’s two gift shops for souvenirs you can only find in Aulani.

You really need at least 3 nights to see Aulani itself, and 4 or 5 is optimal. Add in a day at Waikiki and another climbing Diamond Head or visiting the North Shore, and you’re looking at least 6 nights plus time to recover from jet lag. This is a splurge money-wise, and you can always split your stay between Aulani for the resort experience and Waikiki as a base to explore the rest of Oahu. I would have happily spent 5 nights there if I’d had the money and time after already cruising to get there.

So how about you? Is Aulani on your bucket list? Have you already been there? How long did you spend and did you feel like it was the right amount of time? Talk about it in the comments.

11 thoughts on “Bucket List: How Many Days Should I Visit Aulani?”