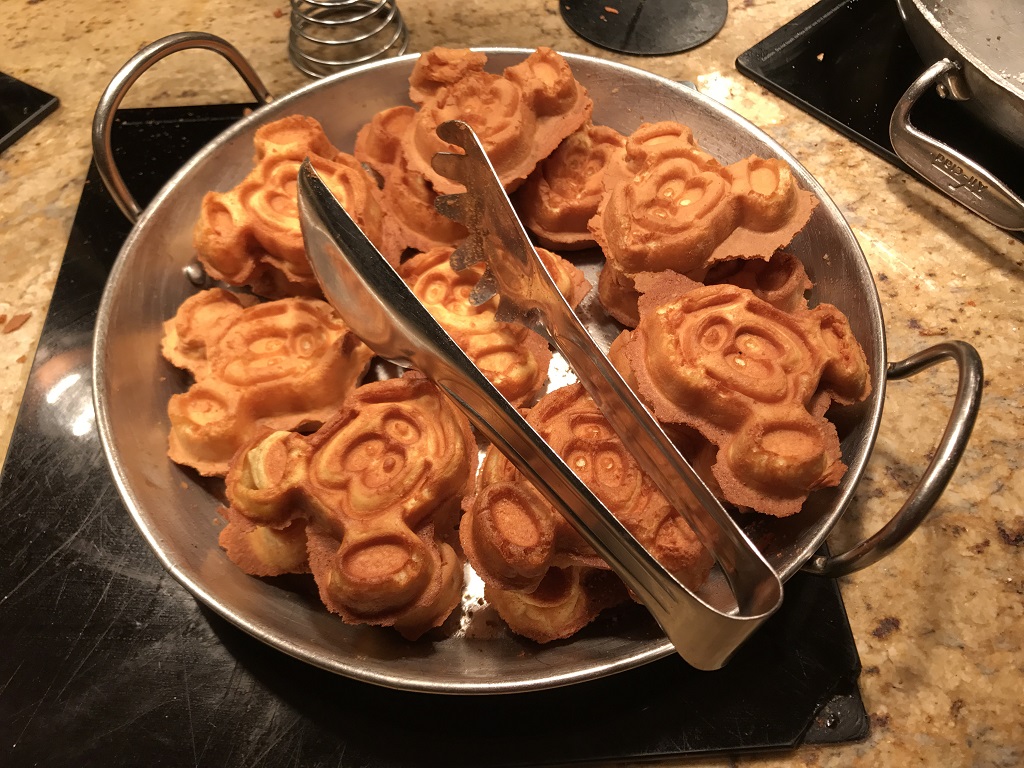 It’s the morning on your last day of your trip to Disneyland Resort. You still have several characters you need to meet so you can complete you Disney character checklist. The problem is you also need a place to stuff your face with ungodly amounts of unlimited food before you return to your soul crushing job the next day. This restaurant may be for you. Here’s my review of breakfast at Goofy’s Kitchen in Disneyland Hotel. When you check in you will be required to pay upfront. Before the shock of $36 per adult and $21 per child can hit you, a cast member will inform you it is time to meet Goofy. He’s decked out in appropriate attire, as are the rest of the characters you will meet later (Minnie Mouse is the dessert chef, Chip & Dale are dressed as waiters, etc). Goofy thankfully doesn’t show any signs of stress and pressure of owning a busy and successful restaurant. He is as fun and playful as he would be if you met him in the parks. At some point in your meal you will be given the option of buying expensive picture packages of your meet and greet with Goofy. I noticed most people politely decline this offer, as did my group due to the $20+ charge. Before we get to the food lets talk about the characters you’ll meet while you dine at Goofy’s Kitchen. Here’s Minnie Mouse looking fabulous. Pluto dressed as a sous chef. Pluto saw that a friend of mine had a Mickey Mouse hamburger backpack. He promptly shoved the entire thing in his mouth. Chip & Dale in their waiter outfits. After you meet Goofy, a server will show you to your seat, and tell you can immediately start eating. The buffet offers typical breakfast items, such as bacon, sausage eggs, biscuits and gravy, ham, and eggs Benedict. There’s also a small selection of non-breakfast foods, such as fried rice, pasta, and a surprising amount of different pizzas. Mickey Pancakes are available, if the waffles aren’t your thing. Here’s the peanut butter and jelly pizza. It’s arguably the most popular item at Goofy’s Kitchen. Most online reviews will mention it and cast members will hype it up. Kids go crazy for this stuff. If you’re a peanut butter fan then this is for you. The children’s section, which is where you’ll find the Mickey waffles and pancakes mentioned above, also has french toast, macaroni and cheese, chicken nuggets, and everyone’s favorite breakfast item, hot dogs. The stand out item, in my opinion, is the custom made omelets. It’s quick and delicious, and there is a large amount of ingredients you can choose from. My egg white, jalapeno, spinach, and olive omelet. It was made perfectly, delicious and fluffy. A nice selection at the salad bar. I have no idea why anyone would pay $36 to eat cereal, but it’s there if you want it. And now the most important part of any breakfast, desserts! There is a staggering amount of desserts at Goofy’s Kitchen. All kinds of cakes, cookies, brownies, puddings, and more. A unique item I wanted to point out here was the oatmeal creme brulee, which I enjoyed. It looks like a standard creme brulee but then under the crust, and mixed in to the creme is oatmeal. I’ve never heard of that before. The best dessert by far was the Monkey Bread. Seriously it was unbelievable. Imagine the best part of a cinnamon roll, the middle, but then none of the rest of it. They’re warm, gooey, and I ate at least 20 of them. One of our readers told me that they like to add some soft serve ice cream (which is also available at Goofy’s Kitchen) on top of them. Give that person the Nobel prize. Why didn’t I think of that?

So, how is the food? Overall it’s middle of the road. There are very few standout items (the omelet station, and peanut butter and jelly pizza), but on the flip side there’s hardly any items that are outright bad (I’d put the bland scrambled eggs, and the flimsy see-through bacon in this category). Most selections fall in the somewhere in the middle. I would say dessert lovers (of which I am) will really enjoy breakfast at Goofy’s Kitchen thanks to the large variety, but how many dessert are you going to eat during breakfast? If you or someone in your party cares about characters, Goofy’s Kitchen will be beyond worth the asking price. Characters visit tables frequently, interacting with each person, and stopping for as many photos and autographs as everyone wants. You simply can not get this amount of interaction in the park without dedicating hours of your time to meeting characters. I like the idea of doing Goofy’s Kitchen (or any other character meal) early in your trip, meeting a bunch of characters during the meal, and then spending your in-park time to do as many rides as you can.

Have you dined at Goofy’s Kitchen? Is it worth it? How’d  you like the food? Let me know in the comments below.