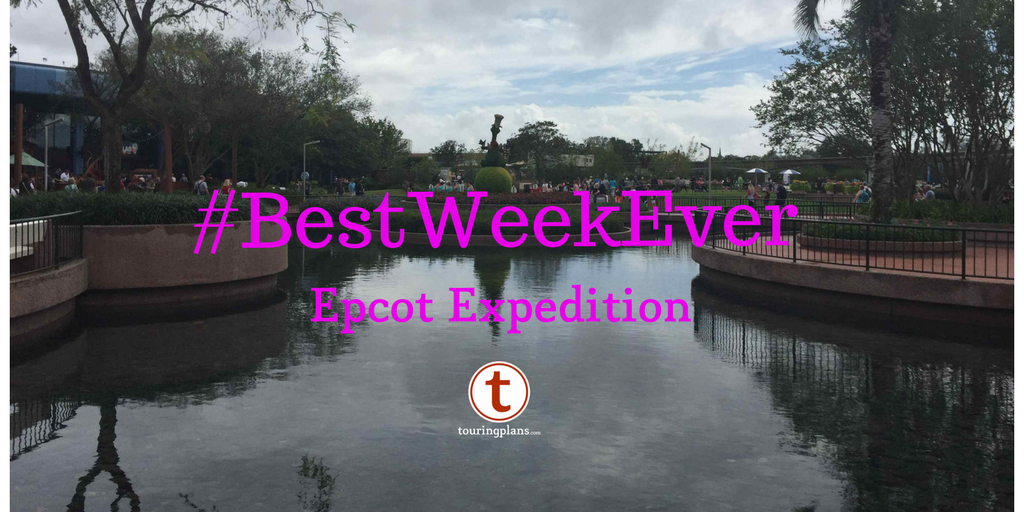 Hi Everyone! Yep, it’s me again for another Best Week Ever. Thank you all so much for your comments on last week’s tour of Magic Kingdom. I had so much fun that I decided to sneak away from work for a morning in Epcot. It was such a gorgeous fall-ish day, how could anyone stay inside? My husband was kind enough to take our daughter to school, and so I got to get a bright-and-early pre-rope-drop arrival at Epcot. It has been so long since I’ve rope dropped Epcot that I wasn’t sure where we’d be held and for how long. They ended up holding us just before Spaceship Earth until 8:45, and then crowds split three ways–Frozen Ever After, Test Track, and Soarin’. Guess which one I went for… If you guessed Soarin’, you’re right! I’m still on the fence about whether I like the new version or the old version better. What do you think? Personally, I’d love to see a Soarin’ over Florida one at some point, too.

While I was waiting in line, I tried the SoarinChallenge web game promoted on the big screens. I think I was the only person actually playing at that time, but it was really a lot of fun. If the line had been longer, I know I would have made the leader board! Once I had arrived back from my flight around the world, I figured I’d take a flight *around* the world. On the way out of Soarin’, however, I did notice something that made me stop for a closer look. In the waiting area for those who are not going on Soarin’, the seats there have places to charge phones and electronics. Pretty awesome to know. But now time for that trip around the world. I hadn’t been on Mission Space since the new changes to the Green version, and I was eager to see if it was something that my husband or daughter would be able to tolerate. Even though I’m not a huge fan of the attraction in the past, I do love the design of the building. I think a lot of people on the way in miss the educational aspects that are all around. I especially love this giant sculpture of the moon with plaques locating various moon missions from around the world. It’s a really impressive exhibit to spend some time looking at up close. This may be the most interesting part of the pavilion to me. But yes, Green it was. I’m the only person in the family who can tolerate Orange at this point, but I’m not a major fan of it as it does make me feel a bit woozy. Overall, I like the new Green Mission, as it is a lot more tranquil than the other version. I’m hopeful that I can bring my husband and daughter on it at some point. From space to….Spaceship? Nothing like a ride on Spaceship Earth to get that retro Epcot vibe going on. Fun fact–when the ride first opened, in the Egyptian scene they had the pharaoh in a massive gold King Tut-like headdress. Eventually they changed his look to the red and white headdress. For many visits, I thought that they were just doing refurbishment on the old piece and that this was just the cap that it rested on. It took a bit of research to figure out that this was actually more authentic than the King Tut gold headdress was. Oops. Ah, Spaceship Earth–no matter how much it changes, it still speaks to that original Epcot feeling. I do enjoy this ride, although I wish they’d bring back the Tomorrow’s Child song. I think it has aged well enough that it wouldn’t feel out of place. Who knows, perhaps a new sponsor will come in and bring it back, now that Siemens is gone…? At this point, I wondered if I could do all the rides in Future World (except Test Track) before noon. Only one way to find out. Off to the Seas I go! There was a decent line to get in–about 15 minutes–which always feels like too much of a wait for this ride. It’s a beautiful looking ride, don’t get me wrong, but I generally sneak around to the “exit” area and go right in to the aquariums. Of course if I had skipped the ride, I would have missed this–look out everyone, it’s a SHARK!! Only a couple rides left. Off to Living with the Land. Every time I’m in Epcot, I’m on this ride because my daughter loves it (and secretly, so do I), so I won’t bore you with tons of pictures, but can you spot the Hidden Mickey in this one? You may have to enlarge the picture to see it… Time for the last ride of the day. In the early days of Epcot, this was my favorite ride. I was “lucky” enough to ride the second version, which I think is why I’m not as much of a hater of the current ride as some people. Still, the ride is really showing its age, and I’d love for a new ride to go in that embraces the fun and whimsy of the original ride. There’s so much potential here. If I ever won the lottery, I’ve already told family that I’d be sponsoring this ride for a redo with my winnings. The people sitting behind me on the ride had never been on the ride before, and weren’t really sure what this Figment guy was about. (The dad called him some sort of little dinosaur creature.) When we got to the upside-down room, the girls were so excited. They got off the ride saying it was the best thing that they had done all day. That level of enjoyment is highly contagious and I must admit I loved it. And yes, even though this shot is from the upside-down part, doesn’t it look cool when you flip the photo upside-down…er…right-side up? The penultimate (there’s an SAT word for you all) show room with all the Figments paying tribute to the original ride is a favorite of mine. I would love for Disney to make a painting of this room–I’d buy it in a heartbeat for my home office. After leaving the ride, this Figment topiary had a good suggestion–get yourself some lunch, silly. Great advice, Figment! I don’t mind if I do. Because I did need to get back to work, I figured I’d grab whatever looked good from the first Food and Wine booth I got to. One dish that I do enjoy is the Verlasso Salmon with arugula chimichurri and quinoa. At $5.50, this filling item was enough lunch for me and absolutely delicious. And with that, time to head back out to the real world. I think that worker productivity would be improved greatly if all workers could take a morning off to visit a theme park. Wouldn’t that be wonderful? And speaking of work, I’ve done a bit of adjustment in my own personal workload–I’ve given notice at my high-stress full-time job and taken a full-time position with my former part-time job. But have no worries, I’ll still be wrangling the blog and coming to you every week for Ask It. Oh, and I’ll still be out and about looking to make every week the Best Week Ever! See you real soon!