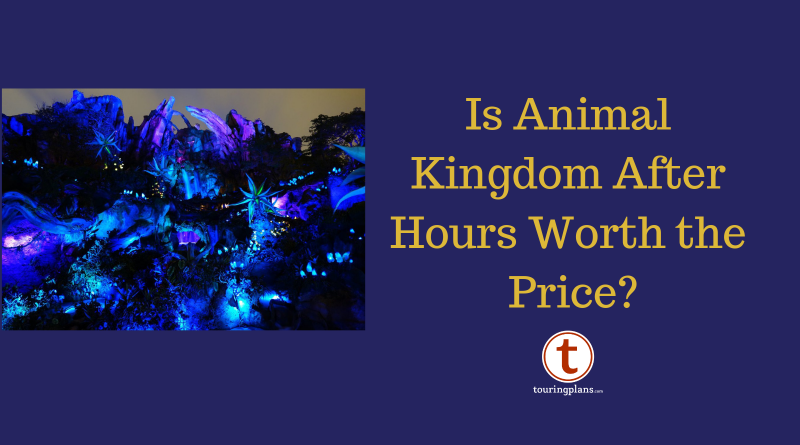 In early 2016 Disney introduced Magic Kingdom After Hours, a late-night event for guests willing to spend the money for attractions with minimal to no waits. Laurel Stewart gave her positive review of the event in 2016. After poor sales of tickets in 2016, Disney revamped the event and relaunched After Hours in late 2018.

The new After Hours event gives guests three hours of exclusive time in either Magic Kingdom, Disney’s Hollywood Studios, or Disney’s Animal Kingdom parks for $125 per guest ($129 per guest if purchased at the gate). Guests can experience popular shows and attractions along with unlimited snacks and non-alcoholic drinks. Check in for the event starts at 7:00 p.m., at least an hour prior to park closing.

With Pandora – World of Avatar the hottest ticket at Walt Disney World, I wondered if After Hours could be a good way to ride these attractions. Could this event work for those wishing to experience Star Wars Galaxy’s Edge when that opens in Fall 2019? Is After Hours a good way to tour Animal Kingdom instead of visiting during normal park hours? How many premium Mickey bars can I eat in three hours?

To find answers (and see Pandora at night) I attended the Animal Kingdom After Hours event on February 5.

What is Animal Kingdom After Hours?

Animal Kingdom After Hours is a special ticketed event that provides a limited amount of guests access to the park after closing. At Animal Kingdom, the event runs from 8:30 p.m. to 11:30 p.m. on select nights throughout winter and spring 2019. Check in starts at 7:00 p.m. and the park closes at 8:00 p.m., allowing guests to experience some experiences offered during normal operating hours.

The following attractions are open during After Hours:

Select food items are available for purchase at Pongu Pongu, Thirsty River, and at several snack carts in Discovery Island and DinoLand U.S.A. Unlimited popcorn, ice cream novelties, and non-alcoholic bottled drinks are included in the price of admission and are located at snack carts in Asia, DinoLand U.S.A., and Discovery Island. If the unlimited ice cream has you in the shopping mood, then Island Mercantile, Windtraders, Serka Zong Bazaar, and The Dino Institute Shop are open.

I arrived at Animal Kingdom at 7:00 p.m. and followed the Cast Members’ directions to the right-hand side entry points for After Hours guests. My first plan of attack was to experience the attractions that would close during After Hours–this would lead to my first disappointment. I love seeing animals at Animal Kingdom but by the time I was admitted for After Hours at 7:00 p.m. Kilimanjaro Safari and the animal exhibits were closed. I consider Kilimanjaro Safari one of the best attractions at Walt Disney World so it closing before we were admitted to the park is a huge disappointment.

I chose to ride the one attraction operating but not featured during After Hours: Primeval Whirl. Despite my worries of lines the attraction had a five minute wait at 7:10 p.m.; Expedition Everest and Dinosaur featured similar waits. After Hours includes a special showing of Rivers of Light. I figured the light crowds on the rides would extend to Rivers at 8:15 p.m. I was right as we walked right to the edge of the river in the standby seating area. Rivers of Light concluded a little after the start of After Hours and the park was mine.

If you have never experienced a sparsely populated park, it is exhilarating, haunting, and tiring. For a theme park fan it is like being a kid locked inside a toy store overnight. One gets to play with all the toys with no resistance but finds the push back was what made the toy store special to begin with; it is a monkey paw wish. It was spooky to walk pathways with no guests that on my last trip were shoulder-to-shoulder gridlock, I felt like I was getting away with a crime.

Disney sells After Hours as the premier way to experience Pandora with short waits and bioluminescent dreams. I bought my ticket to see Pandora at night and to ride Flight of Passage enough times to develop my opinion. Pandora was empty at night, allowing me to capture amazing photographs of the glowing rockwork of the land. Both attractions sent guests through the FastPass lines to board but guests who ask Cast Member at load were allowed to explore the Flight of Passage queue more.

When I was bored with one ride I would walk to the next, frequently jumping between lands to refresh with bottled beverages and snacks in Discovery Island. When I got sick of Flight of Passage I headed over to Dinosaur. I rode Dinosaur twice, without having to leave my ride vehicle, then decided it was time to change my experience up a bit and ride Everest. After Everest I headed back to Pandora for more rides.

After Hours features complimentary snacks and bottled drinks throughout the park, leading me to think it is some sort of Bacchanalia feast. In practice there was only one station across from Tiffins handing out free beverages and snacks during my visit. For $125 a person I would have expected Disney to feature a small cart at each major attraction with said free offerings plus some wandering Cast Members with bottled water and Coke products.

By the end of the event at 11:30 p.m. I clocked in four rides on Everest, four rides on Dinosaur, five rides on Flight of Passage, and two rides on Na’vi River Journey to average out a ride every 12 minutes. The snack station across Tiffins closed about 15 minutes prior to the event and on my way out I received two boxes of “road popcorn”.

At this point I was delirious, high off the rose water sprayed at me on Flight of Passage, and exhausted after riding more attractions in three hours than most guests do in a whole day. Was Animal Kingdom After Hours worth the $125 plus tax I spent? Yes, I believe it was. I rode many attractions and had a blast. If I went with someone else I likely would have loved it even more. But is After Hours a good event for everyone?

Who is this Animal Kingdom After Hours For?

After Hours limits attendance so the usual touring tips like “arrive early” do not apply. Instead these tips are aimed to maximize your enjoyment of the park during the event and to avoid pitfalls unique to After Hours.

Eat Prior to Coming to the Park – Yes, After Hours includes snacks but despite rumors to the contrary one cannot survive on Mickey Premium Bars alone. Have dinner prior to the start of the event. Not only will you have the energy to tour, but you will avoid the lines the purchase food.

Start in Asia – Normally we’d suggest arriving prior to park opening and heading to Pandora first. With After Hours day guests are still in line for the attractions stand-by lines. Instead start in Asia with Expedition Everest and, if there is availability, Rivers of Light. Then once day guests exit Pandora head over to Na’vi River Journey and Flight of Passage.

Take Breaks – My ride average of one attraction every 12 minutes can tire out anyone. Take breaks during the night by watching the Tree of Life Awakens, Pandora Drummers, or Rivers of Light. Resting will give you time to take in the atmosphere of the park, enjoy a free snack, and catch your breath.

Have you attended Animal Kingdom After Hours? What did you think, and do you have any tips for touring? Leave your comments below.

31 thoughts on “Disney After Hours at Animal Kingdom – Is It Worth the Money?”