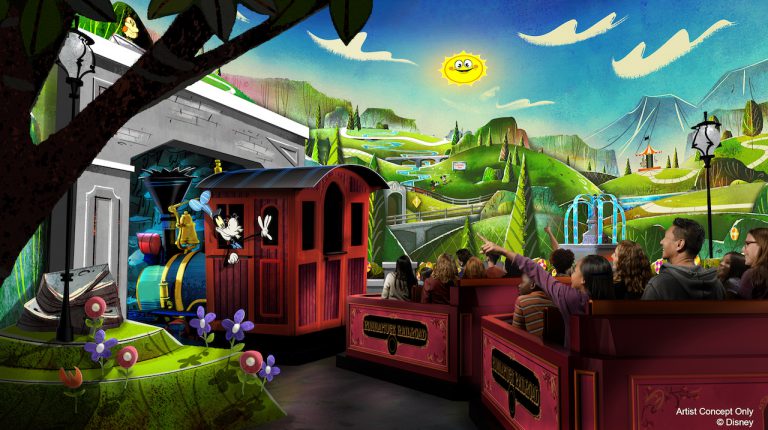 Big news! We here on the east coast have been anxiously awaiting the opening of Mickey & Minnie’s Runaway Railway and now, those on the west coast will get to experience the same excitement! You see, Disney just announced that Guests at Disneyland Park will soon be able to step into the attraction’s cartoon world in Mickey’s Toontown sometime in 2022.

Mickey & Minnie’s Runaway Railway, for those who don’t know, will take Guests into the unpredictable world of a Mickey Mouse cartoon short. You know, those cartoon shorts that have been airing on the Disney Channel? Guests board a train with Goofy as the engineer and of course, things don’t go as planned with Goofy in charge of the train, so Guests will be able to go on a zany, out-of-control adventure filled with surprising twists and turns.

Mickey & Minnie’s Runaway Railway uses state-of-the-art technologies and dazzling visual effects to transform the cartoon world into an incredible and immersive multi-dimensional experience. The attraction will feature a unique 2 ½-D experience; no glasses required and a new catchy theme song that was created especially for the attraction.

In this announcement, Disney also released information about the Walt Disney World version that’s coming to Disney’s Hollywood Studios. That attraction, which was supposed to open in the fall of 2019, has now been pushed back to a spring 2020 opening. (Which makes complete sense to me anyway. With Galaxy’s Edge opening earlier than initially thought, the opening of Mickey & Minnie’s Runaway Railway would have been severely overshadowed.)

Stay tuned for more details about this attraction at both Disneyland, as well as Walt Disney World.