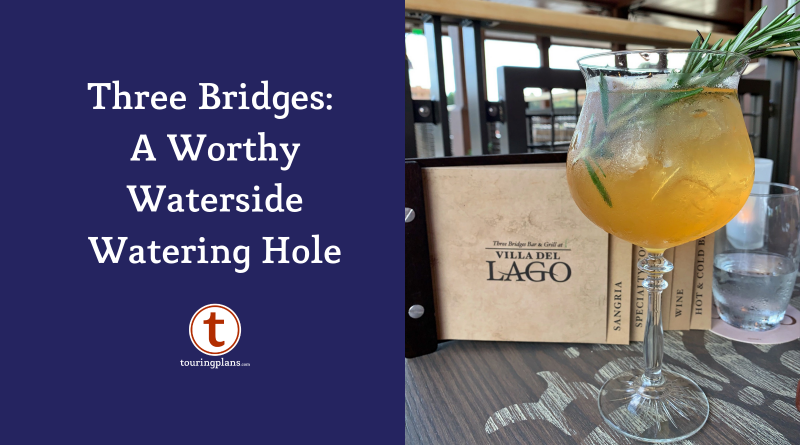 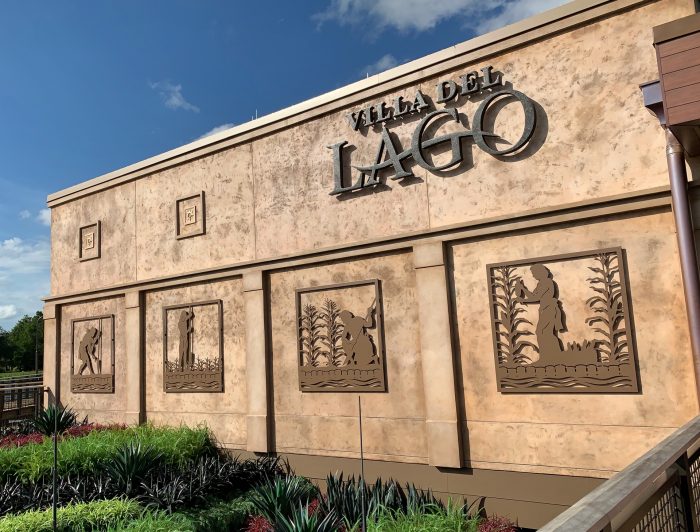 Recently, I dropped in to visit the newly-opened Three Bridges Bar and Grill at Villa del Lago, located right in the middle of Disney’s Coronado Springs Resort. A beautiful lakeside (well, lake-top – it’s a floating bar!) location symbolizes the metaphorical crossroads of the world, featuring flavors from Morocco, Central and South America, and more in elevated bar fare aimed towards thirsty and hungry travelers. I had a chance to sample several libations from their extensive bar menu, as well as many of their food options – let’s take a look and see how Three Bridges stacks up. 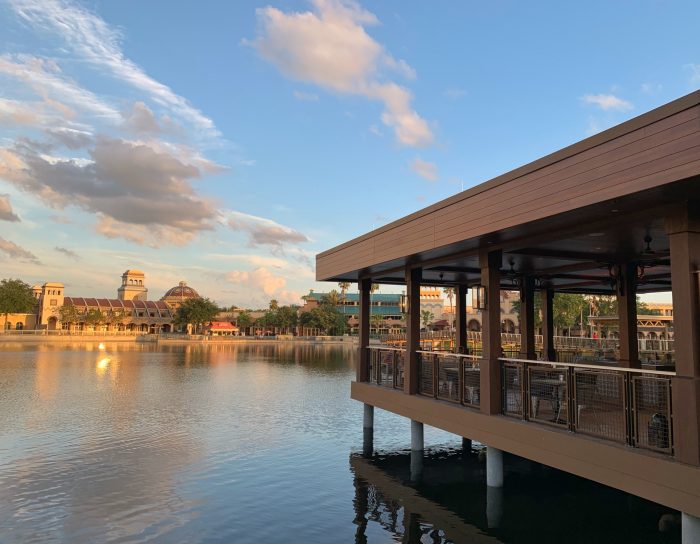 The restaurant’s central bar is a focal point, with several lanterns and a mirror wall, plus requisite TVs making sure all guests are wowed by not only the location, but the décor. There’s ample seating around the bar in comfortable stools, with several more bar seats along the waterview sides of the seating area. Seating at tables and lounge areas aside from the bar is reserved, with host/hostesses using mobile phone numbers to bring you back for your table. While all of these seats are outdoors, the restaurant is well-covered and features both rain-screens and heaters for seasonal use. 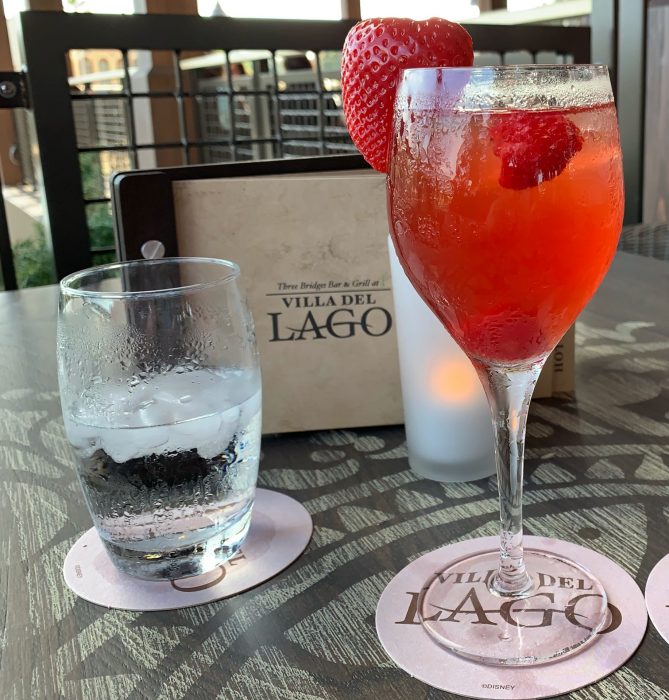 Three Bridges is first and foremost a bar, so it seemed like a natural start to sample several of their signature offerings. The restaurant touts three varieties of house-made sangria, alongside several signature cocktails and a wide selection of wines and beers on draft and bottles. We sampled the Rose Sangria (glass $12/pitcher $38) made with Garnacha Rose Wine, Puerto de Indias Strawberry Gin, Apricot Brandy, Raspberry, and Apple. This is a very gin and brandy forward drink, though the fruitiness is unmistakable. It tends tarter than the white and red options, but is still very refreshing and light, perfect for outdoor dining. 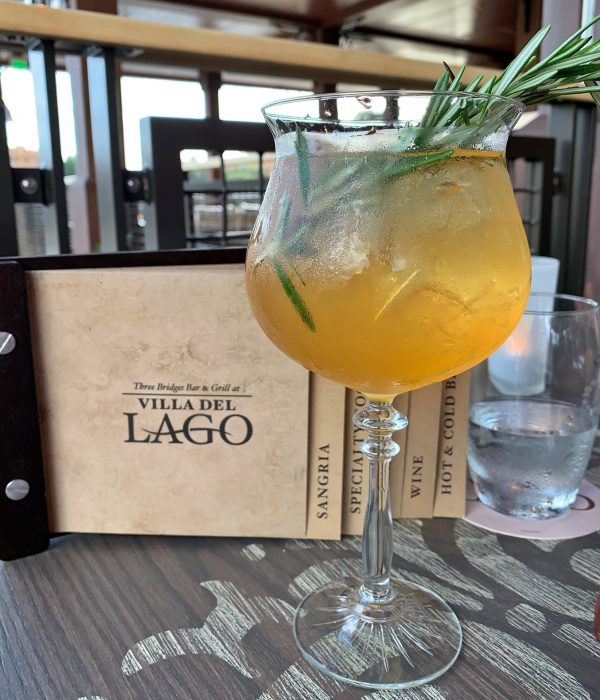 One of the highly recommended cocktails on the menu was the Gran Gin Tonic ($13), featuring Tanqueray Gin, house-made saffron-orange tonic, and soda water. Saffron grounds the tonic and gin with an earthy note that balances out some of the sweetness of the juniper. Overall, this drink could use a dash of fresh acidity to help brighten the orange from the liqueur-like flavors of the tonic, and it was not super liquor forward, so I expect it was a fairly light pour. 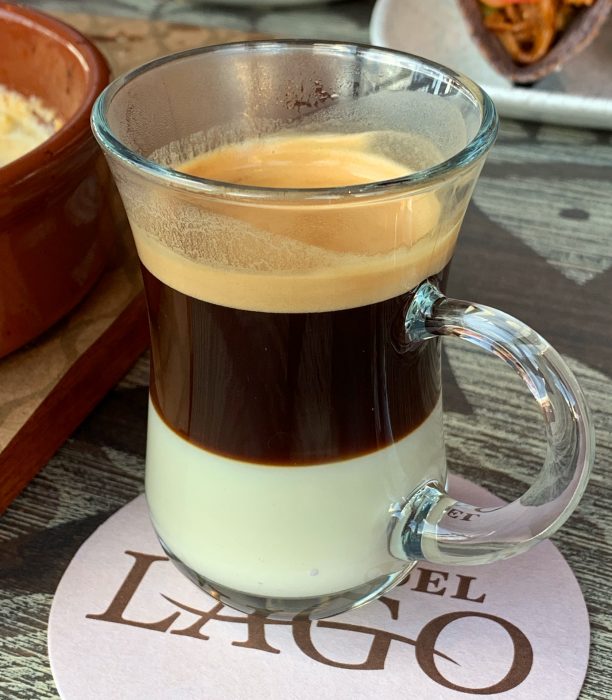 On the non-alcoholic front, Three Bridges features several specialty coffee options, including the Café Bombom ($4.99). This drink is sweetened condensed milk (basically nectar of the gods) topped with espresso; once stirred, it is as sweet as your favorite macchiato from the local coffee shop. It’s also as addictive – I drank this so quickly that my dining companion wondered where it had disappeared to, and I was very tempted to order another. All in all, this is a perfect nightcap or dessert replacement.

On the refreshing end of the non-alcoholic drink menu, I also tried the Prickly Pear Tea Limonada ($5.49), which is Iced Tea, Odwalla Lemonade, Prickly Pear, and Lemon. This drink tends sweet, to be sure, but it was light and not cloying, plus it’s hard to beat the very instagrammable purple hue. I also loved that it was reasonably priced for a non-alcoholic drink, at only a dollar and a half more than a standard soft drink; nowadays, non-alcoholic drinks can top $9 from many restaurants and lounges, so this was a welcome change.

The “Spreadable/Dippable/Shareable” section of the menu features snacky appetizers, perfect for the conventioneer crowd that will undoubtedly dominate the business here at this location. Wings and chips/dip (hummus and naan) are standard staples, still in theme, but Three Bridges also offers a few off-the-beaten-path options that I had to sample. 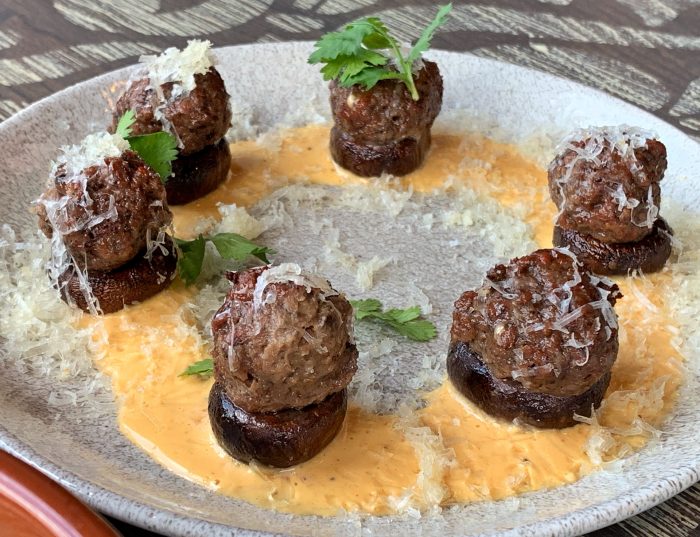 First, I tried the Stuffed Mushrooms ($12), stuffed with plant-based “chorizo” and served atop smoked tomato aioli. The “chorizo” used in these mushrooms is likely the Impossible meat being used to make kefta and meatballs all around Walt Disney World restaurants these days, though it’s lacking the punch of salt, paprika, and spice you’d typically find in a spiced chorizo. The tomato aioli really has no distinct flavor, which is unfortunate; a bit of brightness from the tomato would really elevate the flavors here. Overall, the portion is a bit small considering it does not deliver strong flavors, but it is a satisfying option for non-meat eaters that those who do partake in eating meat will also likely enjoy. Ours arrived room temperature, which may have muted the flavors a bit as well. 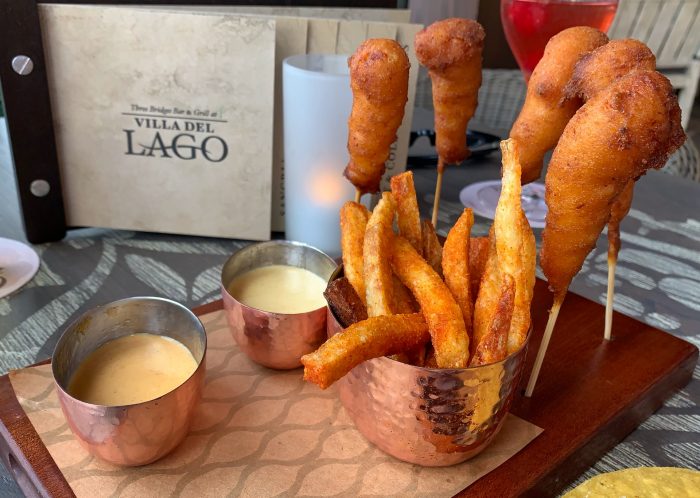 Next, I sampled the Fried Shrimp Corn Dogs ($16) served with smoked paprika fries and two dipping sauces (neither of which were ever identified, but one appeared to be a garlickly aioli, while the other was the smoked tomato aioli that still didn’t taste like much of anything). These turned out to be more batter than shrimp, and while they are fun in concept, they’re less successful in execution – they’re not quite as delicious as the lobster corn dogs from Paddlefish, and can tend towards greasy. The smoked paprika fries were a hit with the table – they disappeared before the corn dogs did (and we certainly could’ve eaten another order). 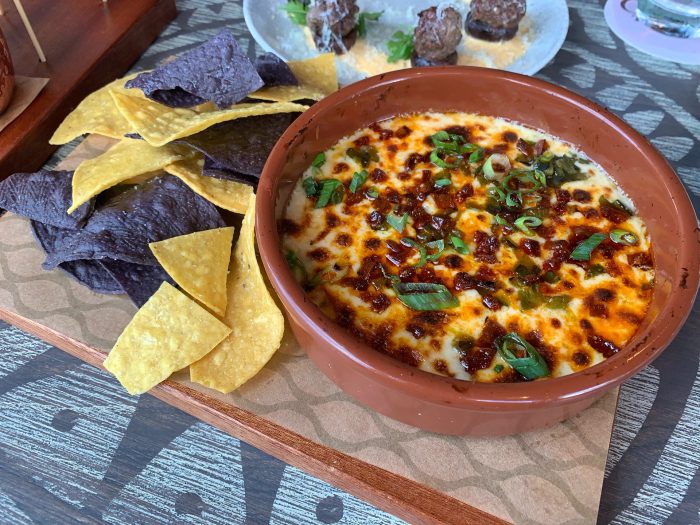 Finally, we devoured the Warm Manchego and Oaxaca Cheese Dip ($13), made with chorizo, roasted poblano peppers, and served alongside tortilla chips. This, too, arrived to our at table room temperature, but the tableside squeeze of lime by the manager who brought us the food was a nice touch. The acidity from the lime did help cut through a bit of the grease and richness of the first few bites, though towards the end of the dish, the dip did start to feel a bit heavy. Overall, though, it’s a quality take on queso fundido, packed with chorizo and peppers, with an addictively-bruleed top that folks will fight over until the last bite. This is undoubtedly going to be a popular dish – it’s a huge portion of cheese dip, and our server even brought us additional chips to finish up the remains of our dip.

Three Bridges classifies their more substantial dishes in a “Sandwiches/Salads/Entrees” section of their menu – keep in mind, this doesn’t necessarily mean 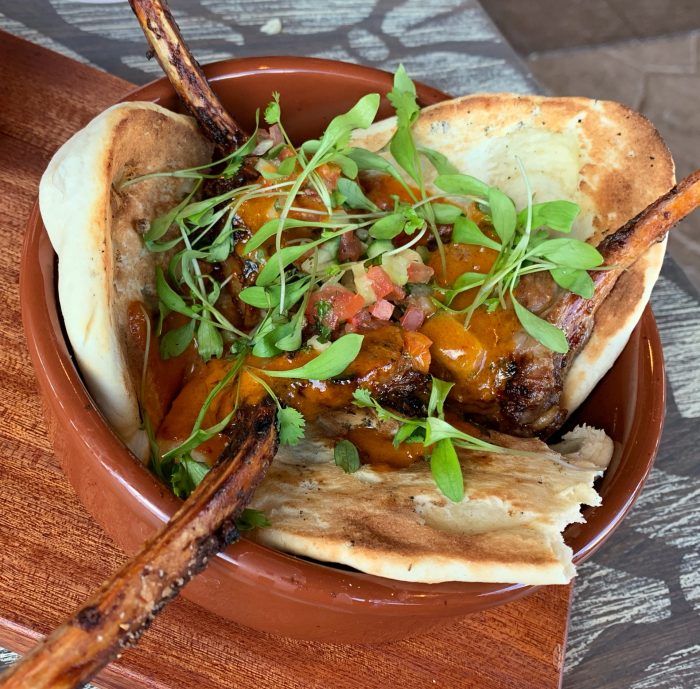 they are entrée size, in the traditional sense, just that you’d likely not share these as you would with the appetizers above. Options include an entrée-sized salad that can be topped with steak or chicken, an open-faced skirt steak sandwich topped with a poached egg, a burger, and crispy hot chicken biscuit sliders.

The first entrée I sampled was the Harissa Lamb Chops ($21), served with mint yogurt, cucumber and tomato relish, and pita. This dish comes with three small chops and a handful of pita with a spicy harissa tomato-based sauce. The lamb was well-seasoned and prepared, but the spicy sauce really took a lot of the flavor away, and required huge dollops of the mint yogurt to cool it all down. The pita was soaked in the sauce and the juice from the lamb, which meant it was tasty but also a little soggy. Your mileage may vary as to whether this dish is truly worth the $21 price tag – it’s always nice to see well-made lamb on a menu, but it may be a little steep for three chops. 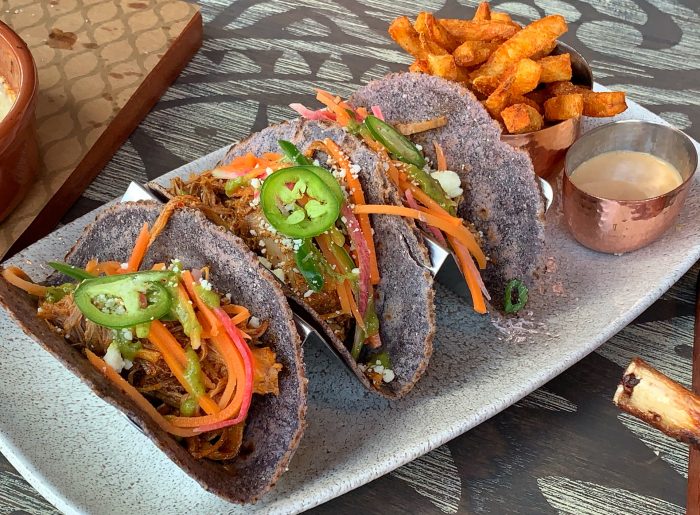 On the true entrée side of the menu, the braised pork tacos ($13) are a relative value for the amount of food on the plate. Served in what seemed like house-made blue corn soft tortillas, topped with radish and carrot slaw, a salsa verde, and Cotija cheese, these tacos were packed with pork and very filling. I found the pork to be a tad tough, but smoky, sweet with a tad hint of pepperiness all complemented by the acidity in the salsa verde and the slaw on top. Alongside these three tacos came more dipping sauce (still unknown!) and a side of either fruit or the smoked paprika fries (you’ll want the fries, just trust me). This was a substantial plate of food – easily a full meal for a hungry adult, and a bargain at the current price, which I expect will go up.

Overall, the two entrees I sampled varied highly in terms of value, but both were excellent in quality; I’d come back for either of these two dishes, and can’t wait to try the burger and biscuit sliders, as those are sure to be very popular options, as well. 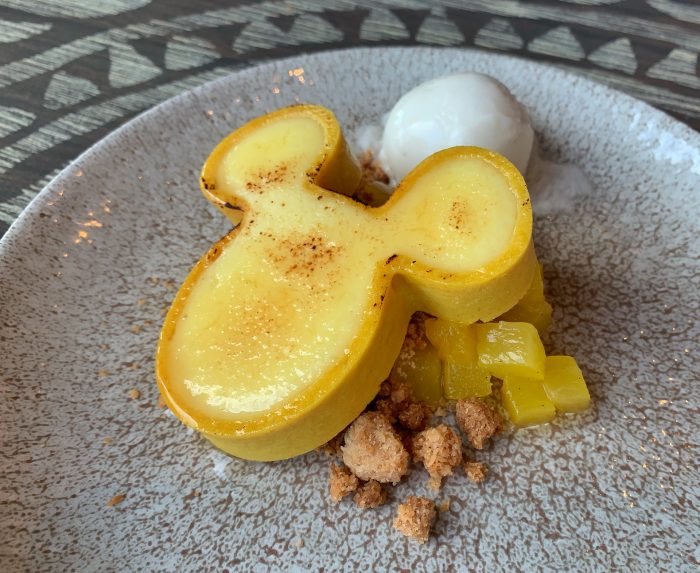 The dessert menu is short and sweet at Three Bridges – literally! Diners have two options, so I sampled both, but I’ll spoil the ending for you – I’d stick with coffee or a drink for a dessert here. I was not wowed by either option, though both will satisfy your sweet tooth.

First up, the Vanilla Custard Mickey Tart ($8) served with compressed pineapple and tropical sorbet. The presentation is upscale cutesy, but unfortunately, very little of the vanilla flavor shone through in the custard here, making this a bland dessert. The sorbet was similarly lacking, but the real star of the dish, which made it worth even picking at, was the compressed pineapple. Think of the ripest, juiciest, sweetest, freshest pineapple you’ve ever tasted, and these little nuggets of fruit are better. I wouldn’t order this plate just to try those, but you’ll definitely fight over the last of these pineapple pieces if you do. 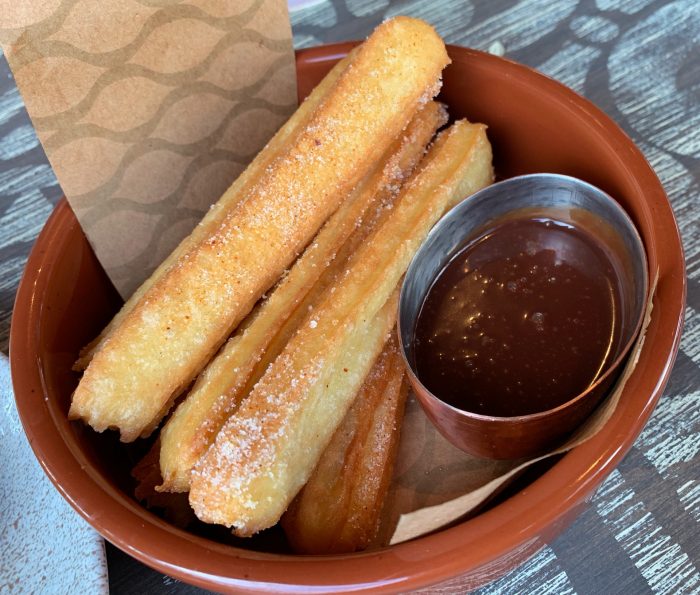 Finally, we tried the restaurant’s signature churros ($9), covered in Espelette pepper sugar and served alongside a chocolate dipping sauce. Served warm, these were clearly made in house (and incredibly fresh), but they were lacking in the pepper sugar department – most of our churros were naked! The chocolate sauce was pretty simple – melted dark chocolate with a tad bit of sweetener. The sauce was on the thin side, but it still did the trick in gussying up the otherwise bland churros. 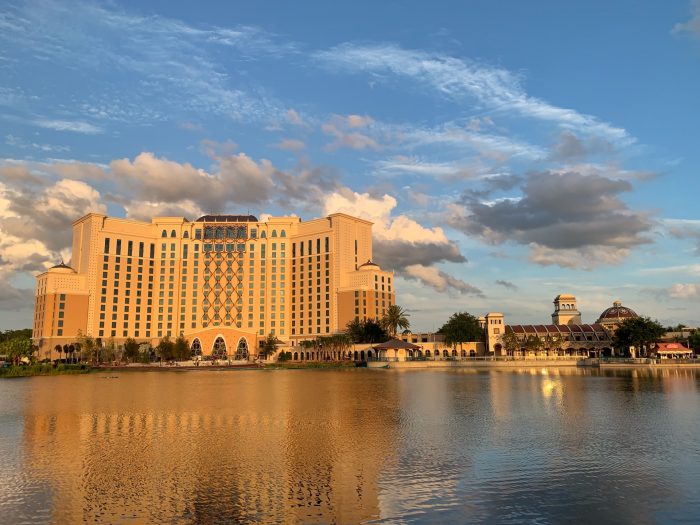 For two hungry adults, or a family of three or four, Three Bridges will ultimately be an expensive night out if you are looking to eat a full meal – our bill for all of the above was just about $150, pre-tip, with a 10% Annual Passholder discount (DVC also accepted; no Tables in Wonderland discount just yet). However, I was impressed with the quality of the entrees and a few of the appetizers so much that I’ll definitely be back; it’s clear they know how to make food well here, and with all of the dishes being made in their own scratch kitchen, a lot of effort is going into making this place a success.

I expect the menu will shift a few of the existing options off in the coming weeks as the tastes of the resort’s mix of heavy conventioneer and family traffic makes their interests more well-known. In the meantime, the current options at Three Bridges at Villa del Lago are excellent, and well worth a visit on your next trip to Coronado Springs.

Does Three Bridges sound like an addition to your dining around Walt Disney World? Let us know in the comments. 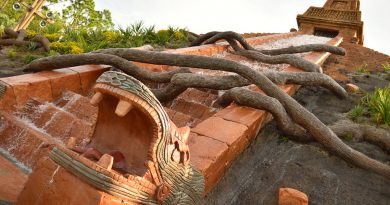