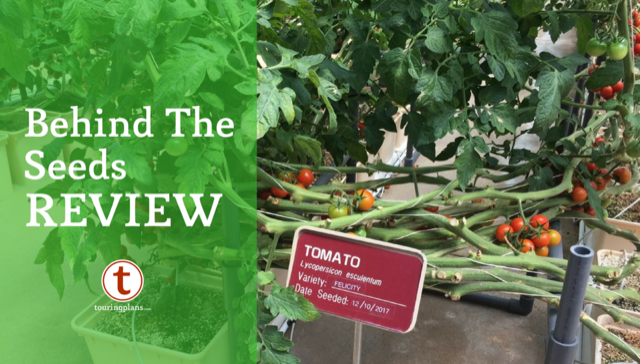 It is absolutely possible to have a Walt Disney World vacation where you just enjoy theme parks and/or resorts and have a positively marvelous time. For people taking longer vacations, or people who have been many times, sometimes it is a plus to do activities that step outside the norm, such as backstage tours. One of the most popular backstage tours is the Behind the Seeds tour at The Land pavilion in Epcot. Why is it so popular? Read on…

For most Disney tours, it is suggested that you book well in advance by calling 407-WDW-TOUR. On the other hand, the Behind the Seeds tour can generally be booked day-of. Simply go to the desk next to the entrance to Soarin’ and ask when there’s room in the next available tour. Tours are limited to 20 people at a time, so it is possible that time slots may fill up, but with multiple tours throughout the day, odds are good that a time will be available, especially if you check in early. Although tours can have 20 people, your tour won’t be cancelled for too few people. On the day that we visited,  our group was 14 people, but the tour after us only had two–basically a private Behind the Seeds tour for that couple! Your tour guides are interns who actually work in the greenhouse and are in college studying a program in agriculture, aquaculture, plant science, integrated pest management, or other related fields. This means that you can ask some pretty in-depth questions. If it is a topic in their field, they can provide detailed answers. Once you have signed up and paid for your tour, you’ll be instructed to come back to the area around the desk 10 minutes prior to your tour. The tour lasts around an hour, depending on the number of questions asked on the tour and the size of the tour group. You’ll be given a name tag and escorted backstage to be equipped with a Whisper listening device. This allows you to hear the tour guide talking even if you’re in the back of the crowd, so that you won’t miss a thing. The first stop on the tour is the Biological Control lab, where you learn and get to observe the beneficial insect solution of integrated pest management. You’re shown a few quick videos of these bugs up close up, so you can see how efficient they are at reducing pests, plus you get to see these tiny exterminators on plants. The next stop is outside the research laboratory, which is still a current USDA research lab, even though you don’t often see people in there from the boat ride. When we were there, the current research project is on making more tolerant forms of plum trees. Because it is a clean lab, you are only permitted to look into the lab from a large window. At that point, you start the real meat of the tour. (Or, since it is plants, is that the seitan of the tour?) The tour essentially walks you backwards from the end of the Living with the Land boat ride up to the first greenhouse that the boat ride enters. In the first greenhouse, you learn a bit about the growing techniques used, some of which could be used in backyard gardens (with the commercially available stacked styrofoam planters). Also in this greenhouse, you meet the most popular plant on the tour–Stanley, the Sensitive Plant (Mimosa pudica). The sensitive name doesn’t mean he’s a good listener (I mean, I think he would be a good listener, but I don’t know for sure). Instead, it refers to a defense mechanism of the plant where he curls in his leaves whenever the leaves are touched. Here’s Stanley in his normal state. At this point, everyone was allowed to touch him and watch the leaves curl up. In a rainstorm, up through a hurricane, Stanley will fold up all of his leaves to make them less likely to be damaged by high winds. This is also Stanley, after being shaken to simulate wind. Don’t worry–it takes him about 10 minutes to re-open after it senses no additional movement. Also in this greenhouse, there was discussion about growth media for different plants, and everyone was provided with a handout to explain how to do some of this at home. (For me, I think I’ll leave it to the professionals!) Everyone also was given a sample of one of the cucumbers grown in the greenhouse. In the next greenhouse, we learned about how the collections are grown, and some of the unique features about what you see in Living with the Land. For instance, the spinning lettuce planters don’t actually need to spin–the spinning doesn’t help the lettuce grow better–but the lettuce planter in the back of the row of four actually spins in an opposite direction to the rest. No reason for that, but it is something that once you see it, it cannot be unseen. Most people know that many of the foods produced in the greenhouses are used on Walt Disney World restaurant property. It is up to the individual chef at a restaurant what, if anything, they come on over to “order” from the greenhouses, and they can put in special requests for certain plants that they want to grow to enhance their menu. Much of the produce is served in restaurants at The Land, especially the ample crops of lettuce and tomatoes. Within the other plant greenhouses, you learn little bits of information about some of the featured plants in terms of their propagation and cultivation. Because some of the plant varieties change from time to time, every trip can provide different information. On our tour, we learned about how hand pollination is done for dragonfruit plants, as that was something that had been done earlier in the week. We also learned about how nine-pound lemons aren’t really commercially viable, especially since when they get close to their nine-pound weight, they tend to burst open and leak juice out. Some plants are familiar to some people, and other plants are staples elsewhere. The pavilion grows a lot of winter melon, which we were told tastes like the white part of a watermelon rind. (Generally it is used in dishes where it can pick up the flavor of the sauce around it.) One interesting tidbit was mention of the large date palm tree in the first greenhouse. This tree is original from the opening of the ride back in 1982, and it has grown quite a bit since then. Unfortunately, it is now so large that it could threaten the integrity of the dome above it–and so it likely will need to be removed. The big question is….how? The tour also included a stop in the aquaponics lab to see the ‘crops’ of farmed fish, like tilapia and catfish. When I’ve taken tours in the past, occasionally the fish would be fed with each tour group. Unfortunately, the fish are pretty lazy after multiple tours a day and would just let the food float to the bottom, making a mess. Needless to say, that’s been removed from the tour. Your experience on the tour will largely depend on your own interest in the subject matter–and what questions you can ask. Very young children may find the tour a bit much for their patience, but the tour moves quickly enough so that no one is standing around bored on it. Also, this is a walking tour, so you will be on your feet for most of the tour, with a brief rest on a bench about halfway through the tour. (There are no restroom facilities in the tour, so also keep that in mind.) Because it is a greenhouse, it can get very warm in there, however there are some places to get a drink of water. Bottom line: Is the tour worth it? If you only have a few days at Walt Disney World, you can have a similar experience riding Living with the Land and not feel like you are missing anything. On the other hand, if you love Living with the Land (which proves you are a person of refined tastes and good judgment), the tour is well worth it to get some additional information and a unique backstage experience. I’ve taken the tour four times, from age 10 to adulthood, and every time I learn something new. The tour moves quickly, but does not feel rushed. In short, it is a great way to break up time in the parks. The price of the tour is $25 for adults, and $20 for children, making it a very affordable compared with other behind-the-scenes tours. AP, DVC, and Disney Visa discounts are available, so make sure to ask when you pay for your tour.

Have you taken the Behind the Seeds tour? How was your experience? Let us know in the comments.

6 thoughts on “Dig Deep on a Behind the Seeds Tour”