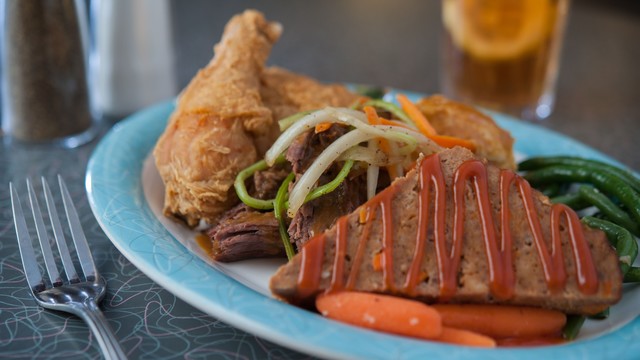 As much as we all enjoy eating at Walt Disney World, you can find yourself feeling sticker shock when the wait staff brings your bill (unless you’re on the Disney Dining Plan, where the sticker shock comes well before your trip).

But, don’t fret. I’m here to help and to tell you that, yes, dining values can still be found on Disney property. Here are a few of my picks for great meals, snacks and drinks on a budget. This doesn’t mean that these are necessarily the least expensive items, but rather the best items and experience for the price. If you’re on the dining plan, you’ll likely want to go for the most expensive item you can get with your credit, but if you’re paying out-of-pocket for food, this list is for you.

Share your thoughts in the comments, along with your picks for dining values.

Table Service Appetizer: Bread Service with all 9 Accompaniments at Sanaa, $13.99

This one lives up to its reputation as a unique, filling appetizer that will satisfy multiple people. First, Sanaa, the table service restaurant at Animal Kingdom Villas Kidani Village, is an outstanding value overall with unique cuisine, beautiful decor and animals wandering just outside the restaurant. The bread service is simple in concept, but complex in flavor. You get a variety of freshly made naan bread to enjoy with dipping sauces arranged in order of spiciness. One version of the bread service comes with three sauces, but we recommend getting the full nine, which is a mere $2.50 upcharge. This is also one dish where the restaurant actually increased the portion. In 2014, when the photo above was taken, we were given three pieces of naan, but when we returned a year later, it came with five pieces of naan, which makes this an appetizer that can be comfortably shared among a table of four.

We love the kitschy 50’s Prime Time Cafe in Disney’s Hollywood Studios for the entertaining surroundings and interactions with cast members, along with the reasonably priced entrees.  One way to save money on Disney dining is to share entrees between two people. Our pick here, A Sampling of Mom’s Favorite Recipes, is the perfect sharing dish since it comes with fried chicken, meat loaf, pot roast and veggies. Pair this assortment of homestyle dishes with the Beer-Battered Onion Rings and two people can enjoy a satisfying meal for $30 total.

Billed as a baked macaroni with cheese custard, the Nudel Gratin dish is served at Sommerfest in Epcot’s Germany Pavilion. While it may not look like much, it’s a square of gooey, tasty richness. If your appetite is lighter, or you’re doing some snacking around the world, this dish could even substitute as a light lunch. If you’ve been to Epcot’s Food and Wine Festival, the Nudel Gratin costs less than the vast majority of dishes served at the booths, but gives you more food. That’s value.

Strictly from a food standpoint, this dish isn’t the best quick service value out there in terms of the amount of food for the money. Instead, this is a case where the value is more in the experience of dining in the Beast’s castle without paying the higher prices that you would pay at dinner. The food is a notch above your typical counter service, it’s a more pleasant experience with the food being brought to your table on real dishes instead of paper plates. Out of the lunch entrees, which range from $12.99 to $16.99, this dish is my favorite, with the fork-tender pork with gravy and mashed potatoes and green beans jardiniere a savory change from your typical quick service offering. Be Our Guest also has self-serve drink dispensers where you can get refills to your heart’s content. Yes, you may spend a bit more here than you would over at the nearby Pinnochio Village Haus, but the atmosphere is worth it.

There’s no getting around it, Drinks are expensive at Walt Disney World. Even the cheapest beers will run you more than $6 at most places. If you enjoy imports or craft beers, expect to pay $8 or more. So yes, the $12 Imperial Sampler at Rose & Crown in Epcot’s UK Pavilion is a relative bargain. Here you get five pours of what I’d estimate to be around 5 ounces each: Bass Ale, Harp Lager, Strongbow Cider, Boddingtons English Pub Ale and Guinness Stout. It’s a nice assortment of imported drinks, probably equal to drinking a couple beers and costs just $3 more than what you would pay for a single pint of any of these selections. As far as drinking bargains go, I’d be remiss if I didn’t mention the late afternoon happy hour specials at a couple places in Disney Springs: House of Blues and the Hole in the Wall Bar near Raglan Road.

Technically, this isn’t an actual dessert, but when you’ve been filling up on heavy cupcakes and ice cream all week, something like this offering at Sleepy Hollow in the Magic Kingdom can be a refreshing change of pace. Once again, this is a dish that’s easily shared (use a knife and fork rather than eating it like a sandwich). There’s no skimping on the fruit here, with plenty of strawberries, bananas and blueberries on top of a fluffy waffle smeared with Nutella chocolate hazelnut spread. It’s a great combination that isn’t entirely empty calories, and there’s something to be said for that.

So those are my picks for dining values at Walt Disney World. I’m sure you have favorites of your own. Please share them in the comments.