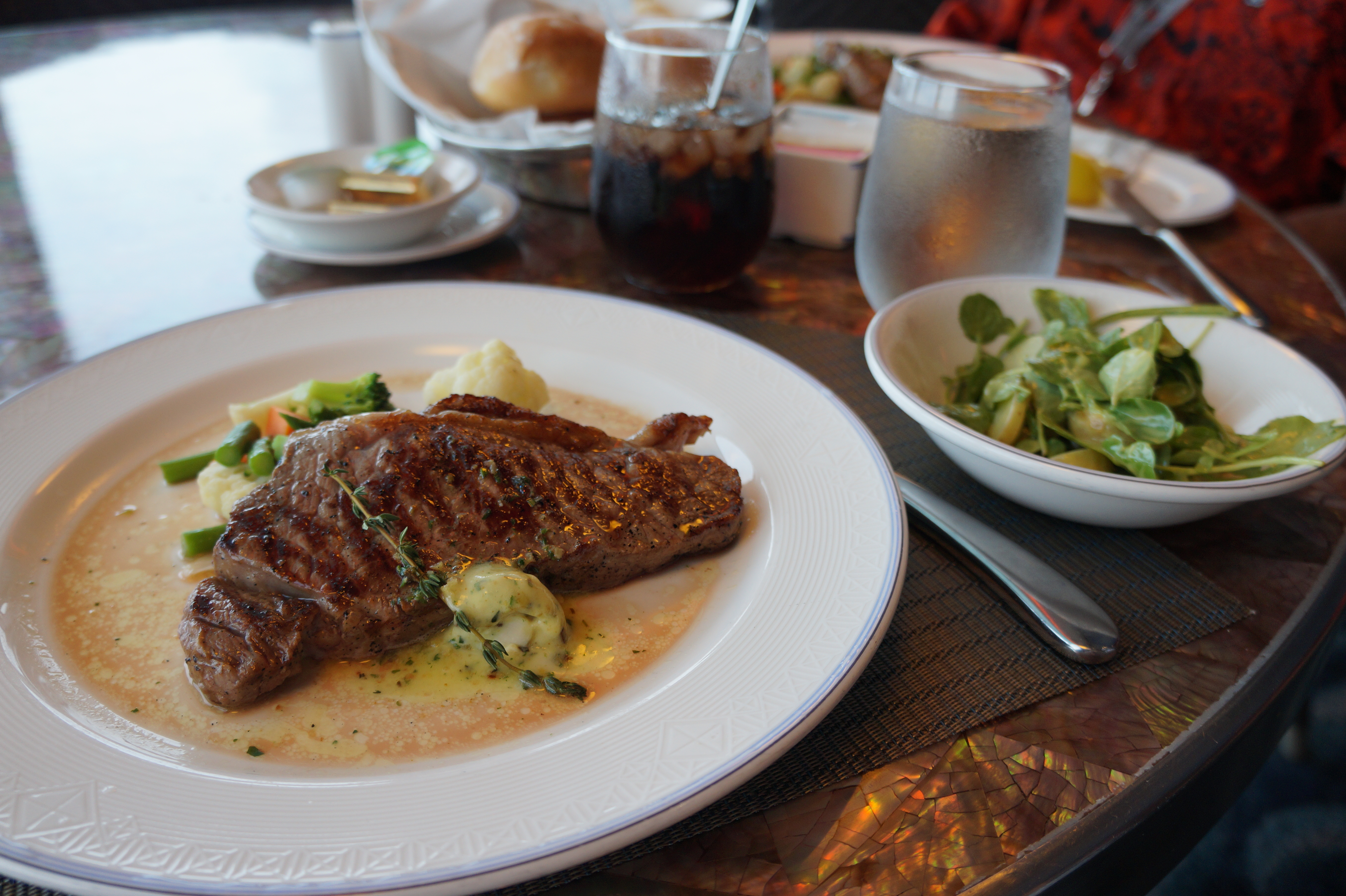 As the saying should go, if you starve on a cruise ship, it is by choice alone. At any time of day there is always something to eat. For many, the highlight of the day is typically the main dining for dinner, where themed dining rooms and a carefully crafted menu combine with a little bit of Disney magic for an unforgettable meal. Sometimes it can be too much of a good thing, however, and there may be reasons why you want to skip main dining. Perhaps you don’t feel like dressing up. Maybe you want a quieter meal. You might have even overslept and missed early dining. Thankfully, on select nights, there is another option–dinner at Cabanas.

On my most recent cruise on the Disney Dream, my husband and I tried dinner at Cabanas. Here’s our experience:

Because it was pirate night for our cruise, I was wearing jeans and a pirate t-shirt–something that I would have felt awkward wearing to Royal Palace (where we were assigned that night). Because dinner at Cabanas is more casual, my outfit was not out of place at all. The dining room is changed a bit from breakfast and lunch service. You have two servers assigned to your table, just like in the main dining room. These are servers who are training for the main dining room, and so they go over the top trying to be attentive to whatever you need. The dining room itself has placemats and fun “Cabanas-style” napkins, plus glass plates and glasses–a step above the plates and cups at other meals. Unlike the main dining rooms, where you have a set time to show up, you can show up without a reservation at any time during Cabanas’ dinner service (which on our cruise was 6:30-8:30). When we arrived at the beginning of the dinner time, we checked in, gave our stateroom number, and were seated immediately. Due to lower seating capacity, if there is high demand, you may have to wait for a table.

Having done dinner at Palo many times before, I love a view of the sea when we dine. The view in Cabanas is on par with the view from Palo. The menu is a sampling of foods from the different dining rooms. This allowed me to order an appetizer that I had been looking at the night before but skipped. I ordered the Applewood Smoked Bacon Wild Mushroom Tart, and my husband went with the Ahi Tuna and Avocado Tower. We were also given some bread while we waited. When our appetizers came out, I found that mine was much hotter than I’m used to food being in the main dining room. It really felt like our meals were made to order instead of being mass produced, which was a nice touch. I had been told that the steak is one of the best meals there, so I ordered the NY Strip (with their warm fingerling potato and watercress salad). Overall, the steak was good, but not something I’d describe as exceptional. I had ordered mine medium, but it was closer to medium well, so if you prefer a less-done steak, make sure to order accordingly. The warm fingerling salad was an interesting alternative to a traditional baked potato, and went well with the meal. Even so, somehow I managed to finish most of my meal without too much difficulty.

None of the desserts on the adult menu called to us, so we both ordered from the kids’ menu, going with both the chocolate cake and the white chocolate cheesecake. Although I wouldn’t consider this meal as anything exceptional in terms of food (largely because we weren’t as daring as we typically are in main dining), I have a feeling we’ll be back to Cabanas on every cruise going forward. Why? Simply put, this was the most relaxing meal that we had on ship. Because we have a young child, we’re seated at tables with other kids. This isn’t a problem per se, but it does mean that dinners are much more active and energetic, even if our daughter decides to bail on us for a night in the kids’ clubs. Because there were so few families in Cabanas, it was extremely quiet and laid back. Our servers had much fewer tables (or, as I learned, servers are assigned based on a guest:server ratio and not on a set number of tables), they were exceptionally attentive and able to just talk about life on the ship. They also tried out all of their tricks that they will use to keep guests entertained in main dining, from origami to paper napkin roses to mouse ears made from napkins. Having the flexibility to go whenever we wanted for dinner and relax for as long as we desired really made this meal a stand-out experience on our cruise. I’ve heard that it is a hidden gem for many repeat cruisers, and now I can understand why. Certainly, if you are on your first cruise, you wouldn’t want to skip any of the main dining room meals, but if you’re repeat cruisers and looking for a relaxing change of pace, dinner at Cabanas may be a great option for you.

One thought on “Dinner at Cabanas: A Review from the Disney Dream”