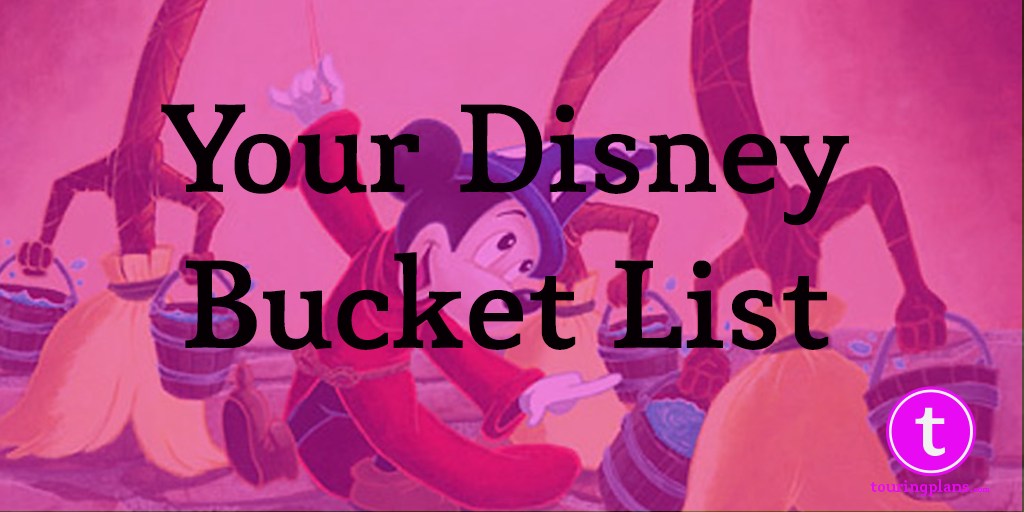 Most theme park fans have a bucket list. Whether it’s hitting every international Disney park or finally experiencing that very expensive meal you’ve always wanted, there’s usually something that brings a wistful look to our eyes. With that in mind, we asked our fabulous blog team: “What’s on your Disney bucket list?”

Claire:
1. Star Wars Day at Sea. I have yet to do a Disney Cruise, and if I’m going to do it, I’m going to do it right: Lucasfilm panelists, movies shown on a loop, characters galore, amazing cosplay, and delicious food. Coincidentally, all of it happens to be on a majestic cruise ship which in and of itself has amazing perks!

2. Tokyo Disneyland/Disney SEA
3. A week in the Grand Californian Resort
4. Adventures by Disney to Africa
5. Eat at Sanaa and finally have that bread about which I’ve heard so much.

Sarah:
1. An Adventures by Disney European Rhine River Cruise because it stops in four countries and includes amazing port activities

2. A stay in a club level suite at the Contemporary Resort
3. Take a combination Disneyland/Aulani trip
4. Dine with an Imagineer at Hollywood Brown Derby
5. Take the Adventures by Disney Backstage Magic trip

Angela:
My number one bucket list item is to spend a night (or two) in the Cinderella Castle Suite at Magic Kingdom Park in Walt Disney World. Growing up, I was that kid who watched Disney Princess films over…and over…and over. My poor family; I made them listen to me for HOURS as I serenaded them with Disney song after Disney song. There was about a seven-year period where I truly thought I was a Princess. (Of course, being the youngest and only girl of three older brother’s only exacerbated this delusion.) Spending the night in Cinderella Castle would bring me back to my roots and reaffirm my mindset that anyone can be a royal…whether they’re three, or 83.

2. Take over for Stacey Aswad, host of “Must Do Disney TV” (I’d even co-host!)
3. Complete every behind the scenes tour offered at Walt Disney World
4. Visit Tokyo Disneyland
5. Go on my first Disney Cruise (The Fantasy)

Dani:
1. Polynesian Bungalow. Say what you will about these accomodations, like poorly positioned, view blockers, under serviced, and overpriced, I still want to stay in one, just once. Two or three nights would suffice. I love Disney’s Polynesian Village Resort, almost as much as I love Disney’s Animal Kingdom Lodge. I am very fortunate that I’ve stayed in a Treehouse Villa a few times over the years and recently a three bedroom grand villa at Kidani Village. I desperately want to cross these exotic bungalows off my list.

2. Victoria & Albert’s
3. Grand I (one) yacht cruise
4. Epcot Seas Adventures – DiveQuest
5. Eat each meal of the day, in one day, at Epcot’s France Pavilion (brasserie for breakfast, Chef de France for lunch, and Monsieur Paul for dinner).

Rikki:
1. I’ve done the domestic resort areas – WDW, Disneyland, and Aulani, but my real true wish is to get to every other Disney Resort around the world. My top choice would be Tokyo and Paris, then Shanghai, then Hong Kong. In that order.

2. I’ve been lucky enough to take multiple sailings on Disney Cruise Line, but I would love to take one of the reposition cruises. The idea of being able to fully have time to experience what the ships have to offer is huge. You don’t get that opportunity with a trip that has frequent port stops.
3. Adventures by Disney.  Particularly one of the Backstage Magic ones where I could see some of the classic Disney stuff, like the archives, imaineering, and more.
4.  I always regretted that when I lived in Missouri I never made the trip to see Marceline. I want to see the area that helped influenced Walt in his passions.
5. The Backstage Magic tour. I’ve wanted to see the inner workings of the Walt Disney World theme parks. I find that fascinating.

Daisy:
First, I have to say in compiling this list I realized my goals are pretty lofty. I’ve been incredibly lucky that I’ve been able to do all the things I’ve done. With that said, the very top of my list is Club 33 in Shanghai. Since it’s the only one left I haven’t visited, I’m very hopeful that someday soon I’ll worm my way into a meal at this exclusive spot. Of course, we still need to visit the park in Shanghai. However, for a bucket list I’m going for broke!

1. Shanghai Disneyland with Club 33
2. After hours event at Tokyo Disney
While I’ve been lucky enough to visit Tokyo Disney three times, I still haven’t made it to an after hours event. In Tokyo these events are sold by lottery for special events like Valentine’s Day and New Year’s Eve. Since everything in the Tokyo parks are absolute perfection, I can’t imagine these event are any different. Someday I want to be there to see it for myself!<
3. Disneyland / Magic Kingdom Dream Suite
I feel like this is on every good Mouseketeer’s list. Can you imagine anything more incredible than having the privilege to stay inside the park for a night? This isn’t something that can be bought, Disney has to choose you. And frankly, I think that’s part of the dream. That I could do anything Disney would even notice, let alone give them reason to bestow on me such an insane honor. It’s the stuff of pixie dust filled dreams!
4. Disney in the snow
Now, I’m a Florida girl and you couldn’t pay me to go hang out in snow somewhere. However, the appeal of seeing a Disney park as a winter wonderland has my attention. I’m pretty sure Tokyo and Paris are the only options to make this one a reality. To make it even more complex, the trip would have to be rather last minute to catch the weather right. Still, I have dreams of seeing a Disney park under a blanket of snow one of these days.
5. Aulani
Believe it or not, I still haven’t made it to Hawaii. The flight is so long from Florida and there is always somewhere else we can get to more easily. There’s also the fact that I’m not sure what there is to do besides lounge on the beach. Despite that, I’m adding it to the list because I want to be able to say I’ve been everywhere. Besides, there are worse places to go than Hawaii, right? Anywhere that has Duffy has to be pretty great!

James:
I feel like I should preface my bucket list selections with a couple of comments.  First of all, I fully recognize that the legal authority of a ship captain to perform a binding marriage ceremony is at best unsettled. Furthermore, it is probably worth noting that I am, in fact, already married.  As luck would have it, this works out pretty well for me, because what I’d like to do is to be a part of a marriage ceremony while riding the Jungle Cruise performed by a Jungle Cruise skipper.  Are Jungle Cruise Skippers “captains?”  Can boat captains perform legal marriages in the State of Florida?  Who cares?!?!?!?  I’m already married, making it purely ceremonial anyway, but what an awesome way to do a vow renewal!  When in the ride, you may ask?  Well, I can think of now place more fitting than to renew our vows right as we pass THE BACK SIDE OF WATER!  It’s the pinnacle of the ride, after all, and the tunnel at the close of the ride would set an interesting mood for a reception.

Other, potentially more likely bucket list items:
1.  An evening in the Cinderella Castle Suite
2.  Chef’s Table at Victoria & Albert’s
3.  Keys to the Kingdom Tour (actually had this scheduled and had to cancel)
4.  As a passholder at both Walt Disney World and Disneyland, I’ve always wanted to hit all 6 domestic parks in a day.

Tammy:
1. Adventures by Disney on a 9-night African safari because a deluxe safari (read – no camping) is a longtime goal.  It will also involve some new camera equipment, I’m sure.  But that can be addressed at a later date!
2. Cruise in the Roy O. Disney Suite on the Disney Fantasy
3. Visit all of the Disney parks in Asia
4. Stay in a themed suite at the Disneyland Hotel
5. Be on the inaugural sailing for both of the new Disney ships

Liz:
1. Experience every guided tour at Walt Disney World – Since no one has created an ice cream sandwich eating contest at the Magic Kingdom for me to win yet, I guess I can settle for behind the scenes glimpses of beloved attractions, line skipping privileges, and animal encounters as my top bucket list item in the interim.
2. Score 999,999 on Buzz Lightyear’s Space Ranger Spin
3. Stay at Wilderness Lodge over Christmas
4. Conquer the Kitchen Sink
5. Watch IllumiNations from a fireworks cruise

Savannah:
1. Visit Tokyo DisneySea. I want to ride Journey to the Center of the Earth, shop til I drop for cute merch, and eat everything, particularly a Chandu Tail and Mike Wazowski Melon Bread.
2. Visit Disneyland Paris
3. A Disney Cruise with a Double-Dip Castaway Cay Itinerary
4. Night at a Polynesian Village Bungalow
5. Take the Walk in Walt’s Disneyland Footsteps Guided Tour

Tessa:
1. Stay in a VP or Presidential Suite at Walt Disney World, even just for one night, to see how the other half lives, Disney-style.
2. Dine in the Snow White/Wishing Well room at Carthay Circle
3. Take an international Adventures by Disney trip
4. Visit Tokyo and Shanghai Disneylands
5. Take a Disney cruise

Laurel:
1. An 11-night Southern Carribbean cruise on the Fantasy in the Walter E. Disney Suite because I can’t get enough of concierge level on DCL and because it’s a rare itinerary for Disney.
2) See the Asian parks
3) Eat at the Chef’s Table at Napa Rose
4) Run the Disneyland Paris Half Marathon
5) Finish my stays in the all the Grand Villas (Old Key West and Grand Floridian, I’m looking at you.)

So there you go, that’s what we’re dreaming of. Lots of trips abroad whether with Adventures by Disney or to the parks, some personal victories, and one very romantic idea from James (every other Disney Husband is ON NOTICE). How about you? Talk in the comments or hit us up on Twitter #DisneyBucketList or Facebook. Or share a photo with us on Instagram of you checking something off your list- and don’t forget to hashtag it #DisneyBucketList.