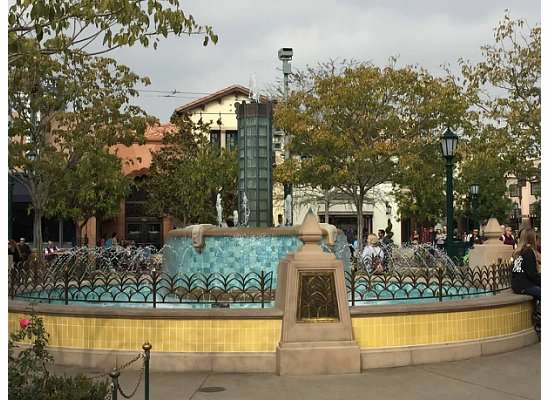 Back in July of 2014, I started this blog series called “AtMousePhere,” covering the background music of the Disney Parks. I mentioned way back in my first post:

Maybe you’ve never really paid attention to the atmospheric soundtrack, but that music subliminally creeps into your psyche and gears you up for wherever your feet take you!

That sentiment has been in existence ever since Disneyland first opened in 1955, and it continued across the country in Orlando. But most recently in the United States, it has simply moved across the Esplanade into Disney’s “newest” US park, Disney California Adventure.

DCA encountered some initial criticism back in its first form by critics and guests alike. However, with some tweaking and overhauling here and there, it has developed into one of Disney’s finest parks, containing some pretty fantastic music!

We’ll split the park in two and discover the music of the unique lands! (Note: we’ll be covering its current incarnation only.) Main Street, U.S.A. and Sunset Boulevard are two great examples of background music that reflects the time period that Imagineers were trying to emanate. Buena Vista Street certainly fits the mold of its predecessors, for sure. Since the area is supposed to recall the era when Walt Disney first traveled to California, the music consists of jazz and Big Band that would have been heard in the 1920s and 1930s!

Some of the artists that you hear are current bands playing those hits. They are the Crazy Rhythm Hot Society Orchestra, Don Neely’s Royal Society Jazz Orchestra, the music of Dean Mora’s orchestras, and the Palm Court Theater Orchestra. (You can find some – but not all – of the music on iTunes or Amazon, or you can find it on their websites.)

Picking up the pace just a bit and fast-forwarding about 10 years, the music of Hollywood Land takes us to the time of 1940s swing music. It’s hard to tell that you’ve made a change between Buena Vista Street and Hollywood Land, but there is one.

Music that can be heard includes:

(Note: some of these songs are new arrangements or covers from original works, but the artists I listed here are the ones you’ll hear in the parks.)

There are many areas of a bug’s land that are devoid of music, if anything because the attractions are so close to each other that the attraction music overflows into the walking areas. For example, Flik’s Flyers has a very loud soundtrack, and “The Flik Machine” from A Bug’s Life is heard. However, when music is heard, it is more music from that movie, especially “A Bug’s Life Suite” which covers a lot of the main music themes from the movie.

For a small and (sometimes) overlooked area of DCA, Pacific Wharf has one of the coolest soundtracks. I highly recommend you take a listen! The music brings in classical guitar and incorporates some great styles, like flamenco, jazz, new age, electronic dance, with melodies from all over the world, like Puerto Rico, Ireland, Spain, Hawaii, and West Africa.

This is only half of our wonderful tour of the music of Disney California Adventure! Stay tuned for Part 2, where we will cover the Big Three: Grizzly Peak, Paradise Pier, and Cars Land!

What is your favorite music in these four lands of DCA? Do you prefer the musical styles of the 1920s or 1940s? Have you sat long enough in the Pacific Wharf area to sample the great music there? Comment below!