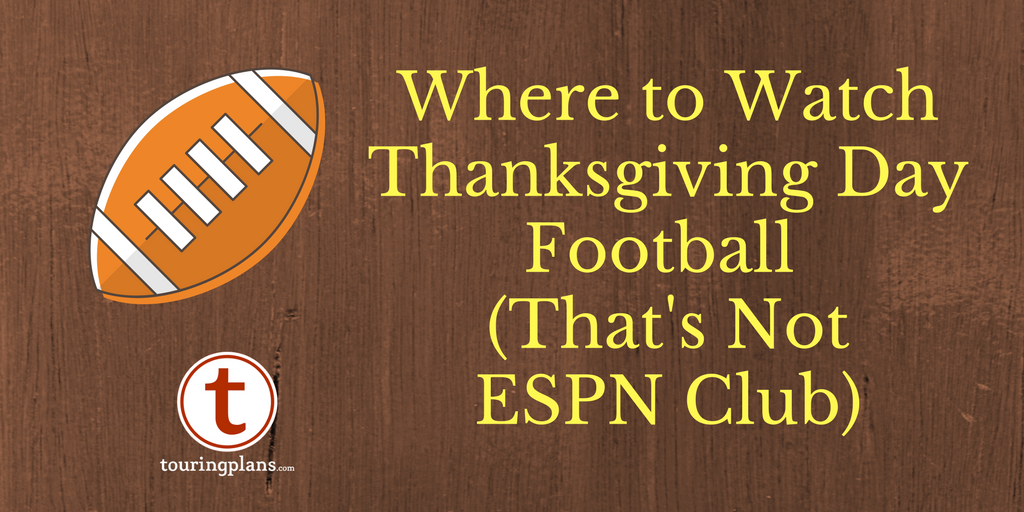 Thanksgiving, the most festive and gluttonous day in between Halloween and Christmas, is a holiday steeped in family and tradition. For some that tradition includes dressing up like pilgrims and bringing an entire turkey dinner into the Main Street Railroad Station. For many others, the traditional Thanksgiving celebration includes the ubiquitous background noise of American professional football. Specifically, the annual battles between the Detroit Lions, Dallas Cowboys, and whichever other random teams are forced to skip a holiday and play football on short rest. Seriously though, football is as much a part of Thanksgiving at the Parade, the turkey, and the giant stack of Black Friday advertisements in the morning newspaper. This leaves many people to ask us “where is the best place to watch Thanksgiving football at Walt Disney World?”

There are a few obvious choices. First of all, as you already know, the Thanksgiving games are broadcast on the major networks and are available on the televisions in all Walt Disney World Resort hotel rooms. So staying in your room for the game (or games) of choice is an easy, yet also a potentially boring and lonely option. There is also the Boardwalk Resort’s ESPN Club, the standard sports destination on property. The main problem with the ESPN Club is the crowds, especially on an NFL football day during an extremely busy time at the Resort. Moreover, both of these options are neither festive or particularly inventive. To remedy this we’ve come up with our list of four other places to watch Thanksgiving football at Walt Disney World.

The criteria for making our list was threefold: an establishment must have televisions on site capable of tuning into a football game, it must serve something that can reasonably constitute a Thanksgiving dinner, and it must have come to the mind of this author. Seriously. I don’t know everything. (Don’t tell my wife!) If you’ve ever done Thanksgiving sports viewing at Walt Disney World and know of some spots not mentioned, please chime in down below in the comments or on Facebook.

Also, it should be noted that Disney hasn’t been totally forthright with announcing which restaurants will and will not be serving special holiday menus this year. It is safe to assume that a great many will add some variation of turkey, potatoes, and stuffing to their menu, but we simply do not know for sure. By looking at what restaurants did in the past, however, we were able to come up with our list. You should also be aware that dining reservations for Thanksgiving are going to be nearly impossible to come by at this point, so our list mainly assumes you will wait for a seat at the bar, eat there, and not bring a bus full of relatives along to eat with you.

Splitsville is such a great spot for sports viewing that it is almost hard to believe that the secret isn’t totally out yet. Splitsville has plenty of TVs to compete with ESPN Zone, a wide variety of food, activities for the non-sports fans in the family, as well as affording the ability to simply sit at a bar and watch sports if that’s your desire. With the extreme popularity of ESPN Club for sports viewing, Splitsville should really be the go-to destination for all major sporting events, including Thanksgiving games. Plus the turkey club on the menu really helps it notch the full Thanksgiving trifecta.

Also at Disney Springs but more upscale than beer and bowling is The Boathouse. The bar boasts some lovely televisions that will assuredly be tuned to the football games and the menu has plenty of options fitting for a holiday meal. Although the menu changes daily and will likely include some kind of traditional Thanksgiving offering, perhaps the most enticing thing that drove us to put it on the list was the regularly available Yacht Club Club (not a typo.) It is a turkey club (what else?) and perfect for enjoying at the bar while staring at the aforementioned lovely televisions. The televisions probably won’t have the sound of the game on but that’s OK. It will be the same as at home when Grandma makes you turn the sound off because it’s interfering with her hearing aid.

This laid-back counter service restaurant and full service bar is relatively new to the scene at Walt Disney World and is a decent spot to relax on some comfortable furniture and watch the games much like you might at home. Located in a detached location of Disney’s Wilderness Lodge between the Copper Creek and Boulder Ridge swimming pools, the restaurant also has picturesque views and the menu even includes a smoked turkey sandwich with cranberry mayo. What more could you ask for on Thanksgiving?

We are going to be perfectly honest and upfront here. This is only on the list for one reason: it is the one and only establishment INSIDE (technically) a Disney theme park that also has a television capable of being tuned in to football. So if your party includes folks who wish to do things like ride rides and see shows while on a Walt Disney World vacation, they can do this while you park yourself in front of a television and watch Philip Rivers throw interceptions. Some Rainforest Cafes also offer special holiday menus, so it is possible that a Thanksgiving dinner with all the trimmings can be purchased. There is also a turkey wrap on the regular menu, an exciting variation on every other restaurant’s turkey club. Come to think of it, maybe this is the best spot to watch the games after all.

What do you think? Have you caught a bit of game watching while at Walt Disney World? Where’s your go-to place? Let us know in the comments.