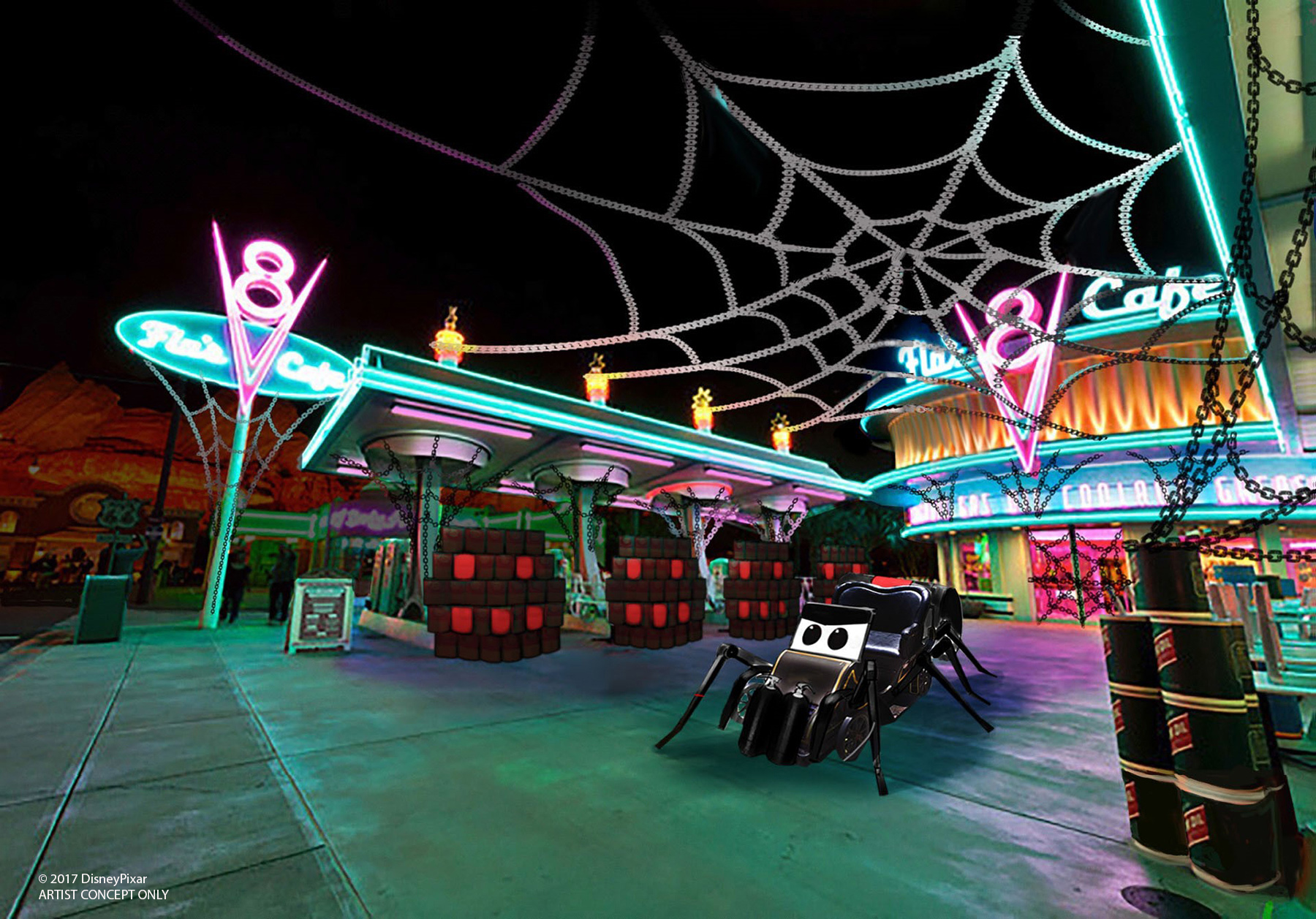 Disney California Adventure is absolutely getting in on the Halloween fun this year. With the brand new mission on Guardians of the Galaxy: Mission BREAKOUT! called Guardians of the Galaxy – Monsters After Dark, as well as fun new decor for both Cars Land and Buena Vista Street, it’s sure to be a spooktacular time! With Halloween Time rapidly approaching (it starts on September 15), we have a brief glimpse at what Guests will be able to expect this year.

First, the main entryway for Disney California Adventure will be seeing some already announced Nightmare Before Christmas themed decor, but that’s not all. There will also be a new 10-foot-tall statue of the Headless Horseman of Sleepy Hollow! He will be holding his jack-o’-lantern head and will haunt Carthay Circle. If you’re a character fan, you’ll want to catch Mickey Mouse dressed as a bat, Goofy as a ghost, and Daisy Duck dressed as a witch. There will also be new, themed background music that further creates the appropriately eerie, but still fun, mood.

But to me, the best part of Halloween at the park will be found in Cars Land as part of their Haul-O-Ween! Here, each place will be decorated for the season, like at Fillmore’s where he’s showing off his Jack-Oil-Lanterns and ghostly folk art. Find Sarge displaying his “pump-kins.” Guests will also see a Spider-Car spinning webs all over Flo’s V8 Café.

Also, for the first time, the Cars characters will be donning their Halloween “car-stumes” as they prepare to go “trunk-or-treating.” Mater will be wearing his vampire or “van-pire” outfit, while Lightning McQueen is dressed as a super hero. Cruz Ramirez will get dressed up as a pirate, Red the Fire Truck will appear as a clown and DJ will be a punk rocker.

In addition, two of the attractions will see fun Halloween themes. Luigi’s Rollickin’ Roadsters will become Luigi’s Honkin’ Haul-O-Ween, an all-new spooktacular dance celebration where Luigi and Guido will entertain with Halloween twists on traditional Italian festival songs like the “Terror-antella,” “The Chop Top of Carsoli” and more. Over at Mater’s Junkyard Jamboree, the ride will become Mater’s Graveyard JamBOOree, where guests will whirl around the graveyard to the tune of creepy new songs and fun haunted twists on favorites such as “Monster Truck Smash” and “Welcome to Radiator Screams.”

Looking for Halloween-inspired treats? You’ll find them throughout the park!

Halloween Time is slated to run through October 31 at the Disneyland Resort.