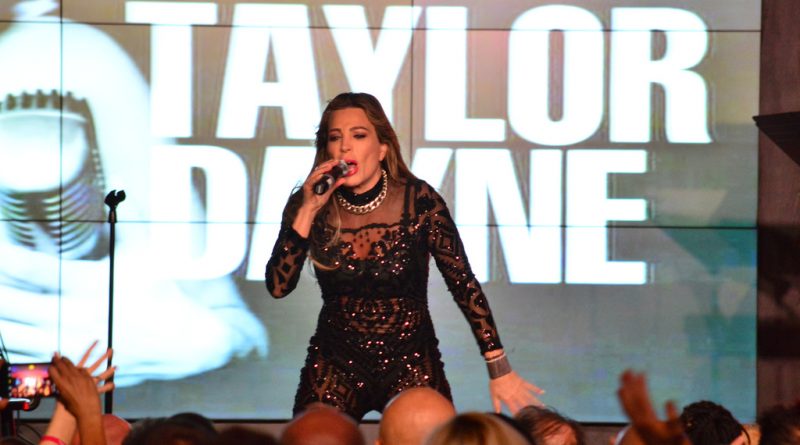 Recently, the SATURDAY SIX team visited the Hard Rock Hotel at Universal Orlando to check out the Acoustic Brunch and enjoy the world-class amenities provided by the resort. This week we returned to the Hard Rock Hotel to experience Velvet Sessions, the monthly concert series that takes place in the hotel’s lobby. Artists who have previously rocked the stage at Velvet Sessions include Bret Michaels, Everclear, and Blue Öyster Cult. However, this month’s show  featuring Taylor Dayne was unique in that Hard Rock Hotel Orlando partnered with the local onePULSE Foundation.

The onePULSE Foundation was created by the owners of Pulse Nightclub to establish a sanctuary of hope around the tragic event in 2016. onePULSE honors the lives that were taken, the affected survivors and the first responders who cared for the victims. For this Velvet Sessions there was also a pre-event VIP reception and silent auction. One dollar of every ticket sold and 100 percent of the silent auction proceeds were donated to onePULSE directly. In addition, the Hard Rock Heals Foundation donated $10,000 to the onePULSE Foundation.

Some of the items included in the silent auction were stays at onsite Universal hotels (including Aventura and Cabana Bay) as well as other Loews Hotels across the United States.

The pre-event reception was held in the Avalon Ballroom.

Inside the Avalon Ballroom was a nice selection of hors d’oeuvres including cheese plates, small bites, and desserts. For drinks there was champagne, wine, beers and mixed cocktails.

There was Cirque du Soleil-style entertainment in the room, including this pair of extremely acrobatic men.

An aerialist performed for the room.

She would also pour champagne for guests.

During the event, we had the opportunity to sit down with Carlton Hudson, the managing director of Hard Rock Hotel at Universal Orlando to discuss Velvet Sessions:

Tonight is our first Velvet Sessions experience. What can a first-time guest expect from the festivities?

Carlton Hudson: Velvet Sessions began in 2002 as a rock ‘n’ roll cocktail party that provides an authentic rock experience for an average of 700 to 1,000 guests per show. It’s almost like having a “grand opening” each month for ten months out of the year! Once per month, January through October, Velvet Sessions invites rock favorites from the 70s, 80s, and 90s to perform, including names such as Bret Michaels, Dee Snider, and Chaka Khan. Upon arrival, guests are provided complimentary valet parking, complimentary beverages and hors d’oeuvre from 6pm until showtime, and an after party in Velvet Bar following the show.

This month’s show is special as it marks almost three years since the Pulse tragedy. How did the partnership between Hard Rock Hotel Orlando and the onePULSE Foundation come about?

Carlton Hudson: Immediately after the Pulse tragedy, Hard Rock International, Loews, and Universal Orlando reached out to Pulse to provide assistance to those impacted by the tragedy. Hard Rock Live at Universal City Walk hosted the All Is One benefit concert featuring Imagine Dragons as a fundraiser for the OneOrlando Fund. Hard Rock is always looking to partner with organizations within our community to provide support for wonderful causes, as we have done with Pinktober in the past. With onePULSE Foundation, proceeds from tonight’s silent auction and $1 from every ticket sold will go towards supporting the families affected by the tragedy and building the Pulse memorial in Downtown Orlando. We hope to make this an annual partnership with onePULSE Foundation to help expand upon their mission.

After the meet & greet, it was time to enjoy the concert. There was signage throughout the hotel advertising Taylor Dayne.

For each edition of Velvet Sessions, the lobby of the Hard Rock Hotel at Universal Orlando is converted into a concert area. Drinks are complimentary until the concert starts (then it becomes a cash bar.)

This is an example of the HRH lobby during the day, with no concert.

This is the same area during a Velvet Sessions concert.

Electrifying the crowd with such hits as ‘Tell It to My Heart’ and a cover of Prince’s ‘Nothing Compares 2 U,’ Dayne put on a two-hour performance that garnered many cheers from a packed lobby.

In an incredible moment during the show, Taylor Dayne invited a guest onto the stage during one of her songs. This man was a survivor of the Pulse shooting, and Taylor pointed out his scar he had on his stomach after being shot. It was an emotional moment for everyone at the event.

Having seen Taylor Dane previously at Epcot’s Food & Wine Eat to the Beat concert series, this Velvet Sessions concert felt more energetic because of the intimate setting. Many of her songs elicited loud cheers from the crowd, with fans singing along to songs all night long. Taylor Dayne is a wonderful performer, and being able to see her rock out with such a passionate crowd was terrific.

The onePULSE Foundation is looking to open the Pulse Memorial and Museum by 2022, which will require raising nearly $50 million to achieve their foundational goals. Funds raised by the onePULSE Foundation will go towards supporting the survivors and victims’ families, provide scholarships in the name of each of the 49 individuals who lost their lives in the tragedy, educational programs to promote amity through all segments of society, and a museum to tell the story of the tragedy. Currently the Pulse Interim Memorial averages 300 visitors per day, where guests can visit the site to learn about the events of the tragedy through photographs, viewing areas, and a green space for reflection.