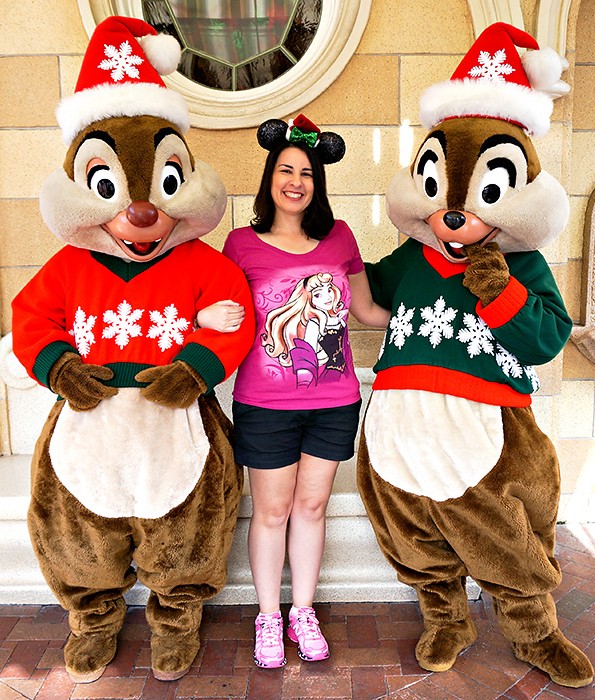 Mickey, Minnie, Donald, Daisy, Goofy, Pluto, Chip and Dale all meet in their holiday sweater outfits in Town Square. Sometimes you may find them at the entrance to the park, but they mostly are all around the Town Square area. If you are looking for a specific character, I recommend asking a character attendant what time they will be out. In my experience, the Disneyland app character times have been completely wrong for the Town Square area, especially during my November trip.

Santa meets in Critter Country, where the Winnie the Pooh characters usually meet during the rest of the year. Let’s start on Buena Vista Street, where Mickey, Minnie, Donald, Daisy, and Goofy all have special outfits for the holidays. They all wear their usual Buena Vista Street outfits, but for the holidays, they add a cute coat, scarf, and/or holiday adornment to their hat. Goofy switches out his tie for one with holiday flair, and adds a wreath to his coat. If there is a heatwave in California, like there was during the first week of the holiday season this year, the characters usually won’t be wearing their holiday coats. So make sure you visit on a cooler day, or at night when the temperature has gone down. The Citizens of Buena Vista Street also dress up for the holidays. Molly and Milly the Messengers even take letters for Santa. Moving over to the Redwood Creek Trail. Chip and Dale meet wearing great holiday scarfs. Santa has a great new meeting area here. He was very excited to show me the lights on his new bench. You can also meet Santa’s Elves while you’re waiting to give Santa your holiday list. In Cars Land, Mater wears a Santa hat. You can’t pass that up! Finally, you can meet several holiday characters during Viva Navidad in Paradise Garden. Mickey and Minnie, Goofy, and the three caballeros (Donald, Panchito and Jose) meet in fun Viva Navidad outfits. They switch out in the same area, so be sure to ask the character attendant to make sure you’re in line for who you want to meet. Though of course you’ll want to meet them all!

The three caballeros are always a lot of fun and very interactive, so their line moves the slowest of the Viva Navidad characters. They also all sign autographs, so three characters signing one book (or more depending on the group) also takes up time. So, make sure you get to the area early, so they won’t switch out with one of the other characters before you get to meet them.

Elena of Avalor also meets in the gazebo here. While not technically a holiday character, Disney includes her in the Viva Navidad celebration. Hopefully she’ll be meeting after the holidays end somewhere at Disneyland, because she is extremely popular. One time this trip, I saw her line close before she even arrived for her set. The Country Bears are meeting during the holiday season at the waterfall area of Grizzly Peak. Usually it’s one or two bears meeting at one time. Sometimes they have holiday outfits on, wearing scarfs or holly on Wendell’s hat. But sometimes, they don’t wear anything holiday related. Most pictures I’ve seen have them not wearing scarfs. I’d never pass up meeting one of the Country Bears, but whether they are holiday or not is up in the air.

As part of the Festival of Holidays found around the Paradise Pier area, there are Holiday Stilt Circus performers. They are fun to watch and will also stop for pictures.