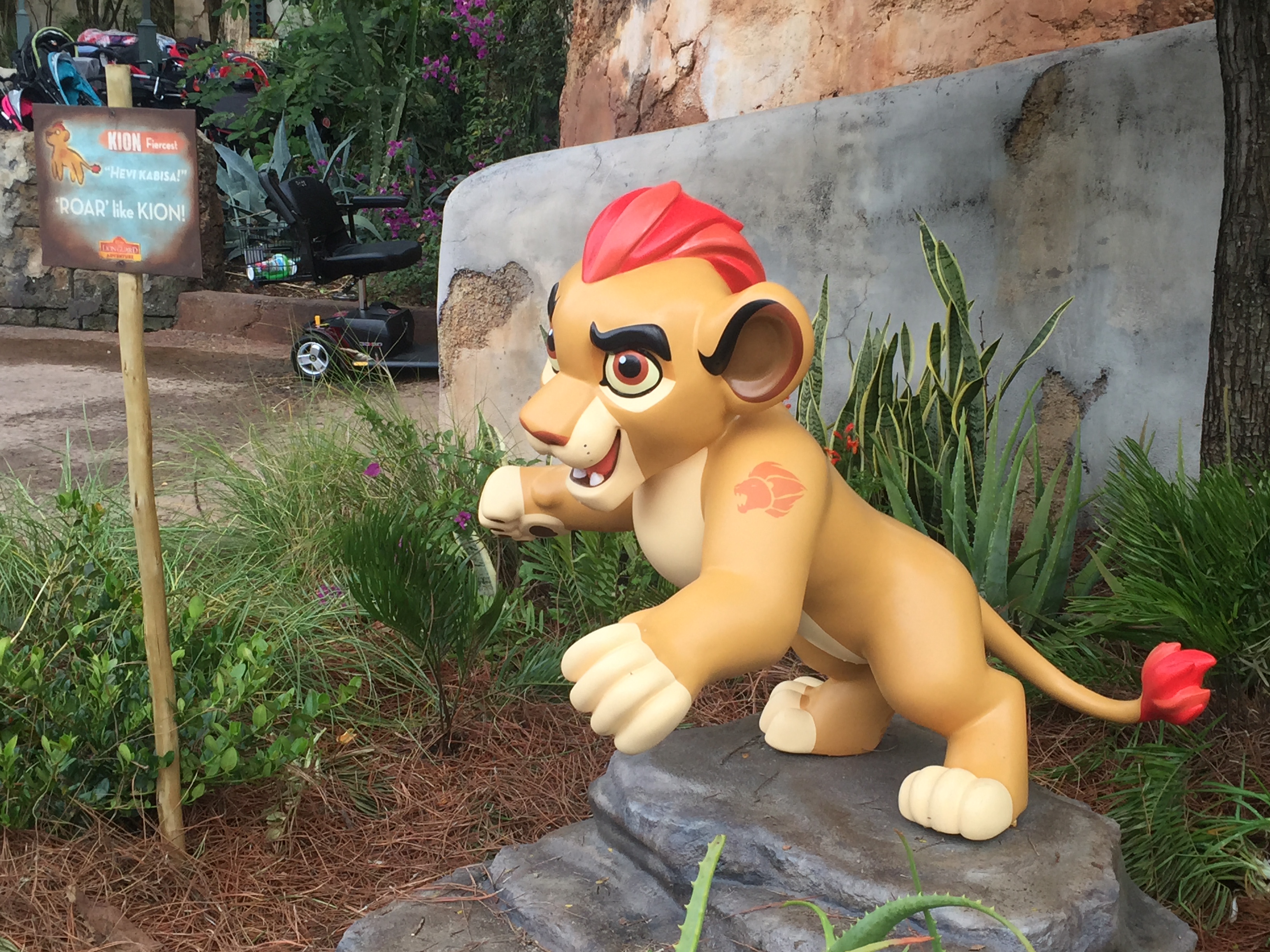 As a parent, every time Disney Junior rolls out a new show, I have a sense of dread. Some end up being wonderful shows (Sofia the First, Doc McStuffins) and some grate on my nerves (Goldie and Bear, Kate and Mim Mim). Then there are some that I think I am more excited about than my daughter. One of the latter is the new show The Lion Guard. For those who aren’t familiar, Kion–who is basically Simba’s son–has been tapped to become leader of a special forces group with four of his friends called The Lion Guard. After watching the show and purchasing the soundtrack for morning drives to school, I was pretty certain this show was going to be a hit. Disney also went with a bit of marketing push, and in addition to merchandise popping up in stores across property, Animal Kingdom also is offering The Lion Guard Adventure. Sounds like a great Saturday outing…

First, we stopped at Island Mercantile and picked up a special Lion Guard Adventure map. Although billed as a scavenger hunt, it is a very easy one, with large banners identifying the location of the even-larger statues. As long as you follow the map, it won’t take long to complete as you wander around. Here are the characters in the order we found them.

Ono, the keenest of sight (Egret) During our adventure, we thought about taking a ride on Kilimanjaro Safaris, but with a 25 minute wait, we figured we’d skip it and instead catch a viewing of Festival of the Lion King. We even saw some “advertisements” for it on our way back. Although I think this is one of the best shows at Disney, I realized that I hadn’t seen it since it moved to the new theater. (You know, years ago?) The new theater didn’t seem to be much bigger, and it was a packed house. As always, it is an amazing show and worth the time. The new section where the theater is located does an amazing job of blending in as if it had been there since the park first opened. A lot of care had also been taken to really embrace the theme of the area whenever possible. A favorite of mine was this sign on one of the construction walls. I had to snap a picture of this sign from the bathrooms, because it is just a nice touch for Disney’s environmental emphasis. To finish up the Lion Guard Adventure, we were supposed to take a trip out to Rafiki’s Planet Watch to take the Lion Guard Pledge and get our official Lion Guard buttons. There were two little snags on this plan, however: hunger and a child who really wanted to hit up the boneyard.

The first was easy enough to remedy, and gave me a great idea for an upcoming article, revisiting my article on savory snack credits. New items have been added to kiosks at Animal Kingdom, and it is probably the best theme park to use your snack credits aside from Epcot during Food and Wine Festival. Here’s a small sample of what you can find.

Next stop was The Boneyard. Although this playground is a great place to let your kids run around and burn off some energy, there’s a lot of potential for kids to get out of your sight. If you’re a helicopter-type parent, this place can be torture. Thankfully, there’s only one way in or out, and so if you position yourself near the exit, your child won’t be able to leave without you. (And there’s always a cast member posted there to make sure no kid leaves by themselves. Granted, the problem is getting your child *to* leave, not getting them to stay.) In addition to the standard playground area, there is a second “dig site” area. The “sand” in the dig site is actually very fine gravel, which makes it easy to brush off. Because my daughter wears glasses, I always cringe a bit when I see some of the “sand” flying and give thanks for anti-scratch coating! After a half-hour playground break, it was time to finish up The Lion Guard Adventure.  The only way to get to Rafiki’s Planet Watch is by the Wildlife Express train, which runs approximately every five minutes. Usually the train is only half full, but with the Lion Guard Adventure, it was closer to full than not. Thankfully, when we arrived, the line to take the Lion King Pledge wasn’t very long. The Cast Member giving the oath to kids did a great job of modifying the oath for different age levels who may not have the attention span for everything. A PhotoPass photographer was on hand to document the experience, too.

Each of us got a Lion Guard button to show we had completed the adventure. There was also a photo opportunity with Rafiki, but the day was getting long and the ten minute wait didn’t look appealing. Instead, we took a look at the exhibit they had about the upcoming movie Zootopia. On the way out, we stopped by a new exhibit that has opened recently. With crowds getting heavy, it was time to head for home. The next morning, we decided to do one more Lion King encore — this time at Disney’s Art of Animation Resort. As if they knew we were coming, the daily trivia was Lion King-themed. Without a doubt, Landscape of Flavors (the food court at Art of Animation) has my favorite breakfast sandwich at Walt Disney World: spinach, paneer (cheese), and roasted cauliflower on naan bread. It is just the right amount of food and has flavors that somehow work great for breakfast, even though it doesn’t sound like a breakfast offering. Of course having a kid at the table meant waffles were on tap. Didn’t get any Lion King waffles this time, but did get a Nemo one and a Little Mermaid one. Then, to walk off breakfast, we did a short tour of the Lion King area of the resort. Back along Hourglass Lake, there are some neat signs with fun facts about each movie that the sections of the resort are based on. Being a local is different from being on vacation in that life stuff still has to be done. In this case, we had to head back to the house so I could spend the rest of the weekend getting our taxes in order. Hevi Kabisa, indeed! Still, even with that “fun” on my plate, I still can say we had the best Lion King week ever!