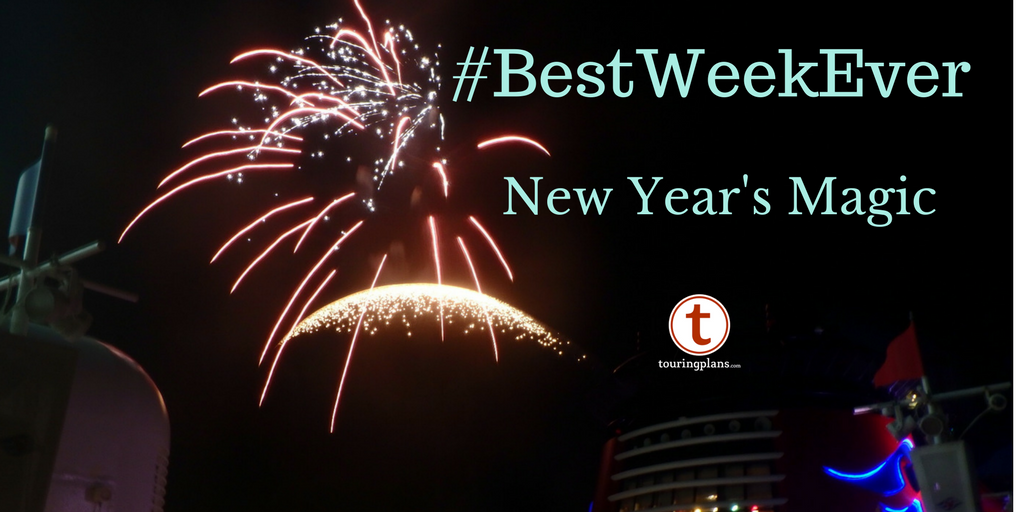 Last year, my family set an interesting bucket list item–to sail on all four Disney Cruise Line ships within a calendar year. We sailed on the Wonder in February, the Fantasy in June, the Dream in September, and now it was time to get on board the Magic in December for a New Year’s cruise. Part of the reason we wanted to book this cruise, aside from our first time seeing the Magic, was that this cruise made a stop in Key West, a place we’ve always wanted to visit. The challenge for us is that it sailed out of Miami. We got a hotel for the night before (out of fears of traffic going from the Orlando area to Miami), and on a beautifully clear morning, headed to the port. A word of warning–if you’re used to the ease of getting around Port Canaveral, the Port of Miami is a whole ‘nother kettle of fish. The way we were directed in by GPS meant that we didn’t have any signs telling us which dock the Magic was at, and there’s parking scattered everywhere. We ended up spotting the ship, pulling in the next available parking lot, and walking about 1/4 of a mile with our luggage to find a porter. In the end, there was a closer parking area, but it fills up much faster than Port Canaveral, so take parking where you can find it. Also note that the terminal where you leave may not be the terminal you return to. We left from terminal F, but returned to terminal G. Just some background about how “getting there is not half the fun”. I can’t say I’ll never sail from Miami again, but I can say that I love Port Canaveral all the more now. But enough about travel fun. Once in the terminal, it was all Disney experience. Check-in was quick and efficient, security was brief, and even the wait time for our boarding number to be called went quickly in a much more comfortable setting than Port Canaveral. Time flew by very quickly between getting on board, doing a bit of exploring, and then time for sail away. And what a view! Here’s where sailing out of Miami beats the pants off of Port Canaveral. Sailing from a big city is amazing!

In one brief article, it wouldn’t be possible to write about everything that we experienced on the cruise–Key West, Pirate Night, New Year’s parties, exploring new places, and so on–so I figured I’d just give some snapshots from the cruise experience and snippets of details about what we did.

We love exploring ships, and especially looking at the artwork. There was an entire area that had framed factoids about the ship like this one. Our first night, we did dinner at Palo. It is certainly a great way to start off a cruise and get you in the rest and relaxation mode. We got up early on our Key West port day, and had an almost empty Mallory Square in the morning. Except for the chickens. There’s chickens everywhere. Seriously. We did the tram tour on Key West to get around and had an amazing experience at the Key West Butterfly Conservatory. It was by far one of the best butterfly habitats we’ve visited and one of the best port excursions we’ve ever done. We also visited the Key West aquarium, with an assortment of sharks, sting rays, fish, and this little buddy. I believe it is the local law down there that you’re not allowed to leave Key West without eating a slice of Key Lime Pie. And I wouldn’t want to break the law…. Back on ship, the Tangled show is amazing–probably the best of all the shows we’ve seen on all the ships. It was also fun to hang out in O’Gills–or, rather, the Snuggly Duckling. We always enjoy our meals on Disney cruises. It’s even more special when a certain friend shows up at the end of the meal, too. We’re not the only ones who get star struck about seeing characters. Chip and Dale were practically falling all over themselves when they ran into Belle in the corridor. Ringing in the New Year at sea is a lot of fun–especially when you do it with Goofy as Father Time for the old year…. And Donald as Baby New Year. Speaking of babies, anyone else love Jack-Jack’s Diaper Dash? Racing babies for fun does seem like there should be an ethical quandary in there, but it can be exciting and fun (and the babies enjoy it…well, most of them). The New Year’s deck party was a great way to count down those last few minutes of 2017, with entertainers, music, and lots of fun for all. It was our own floating Times Square, only, you know, not freezing. Speaking of the Dream, guess who we ran into (although thankfully not literally) on New Year’s Day? We also got to see the Wonder at Castaway Cay. Pirate’s Night is always a blast. This year, I brought a parrot to sit on my shoulder, and our head server made sure it got fed well during our meal. And then it was time for the deck party, complete with a flash mob performance by the tweens and teens from Edge and Vibe, and characters (of course). Castaway Cay is always a fun stop for a cruise. It was a little too cold for this Florida family to do much on the beach, but it was the perfect weather for finally going out to the observation tower to take a look. Because I’m too cheap to pay to see movies, I did make time to catch The Last Jedi on board for an 11 PM showing, too. And just like that, it was time to pack things up and head back to reality. See ya real soon, DCL! We grabbed our bags, found the car, and drove on back home. Hard to be too sad to leave a ship when you punch in directions to Walt Disney World on your GPS, though… What a whirlwind of a trip! I don’t know about the rest of you, but sometimes I’m more tired coming back from a vacation than going to one–it’s a good tired, though.

Even though our cruise wasn’t a MerryTime cruise, there were still plenty of decorations all around the ship and Castaway Cay. If you’d like to see those pictures, check out my blog post devoted just to that. If you’re interested in what kind of merchandise was on board, I have a blog post for that as well.

That’s it for this Best Week Ever. I’m really excited about getting back to the parks after the craziness of the holiday season. Festival of the Arts starts this weekend. Hmm…

Whatever you’re doing, make sure you keep having your own Best Week Ever!