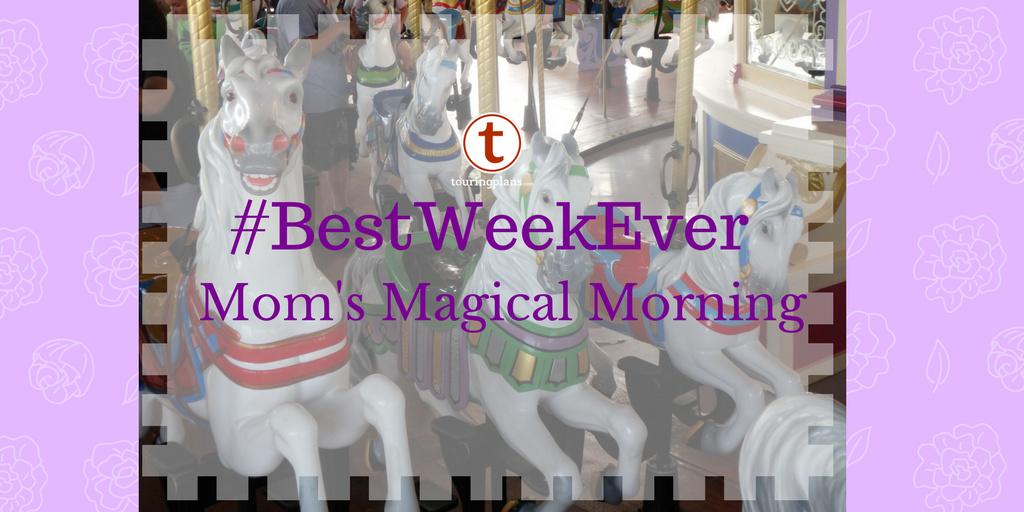 Last Friday, I got a note from my part-time job saying that they’d be closed Monday for the holiday. I checked my daughter’s school schedule–she had school. Then I contacted my full-time job, and asked them “Hey, um, I feel silly asking this, but do we have Monday off?” A handful of emails later, the staff realized that we did (although most people were planning to work during the day anyhow to avoid production falling behind, but as an hourly employee and not salary, that wasn’t an option for me). I checked with my husband–nope, he had to work.

I hadn’t been to Magic Kingdom in ages, and that sounded like a great option for a quick solo trip. I dropped my daughter off at school at 8:30 and was pulling into the Simba section at 8:50. Ah, the local life! After a quick tram ride to a bus ride to a leisurely stroll, I was at the front entrance, which was surprisingly empty for a holiday. Halloween decorations were all up, and I love the character that they have. It really does add something for the season. While wandering around, I saw that one of the Main Street Vehicles was pulling up to the curb and there was no one waiting to get on. Even though it is much faster to walk to my destination, I can’t resist a ride on this beauty. At first, it looked like I was going to have it all to myself, but eventually we fit 7 people on board. We all decided to pretend like we were some sort of celebrity VIPs. I can’t imagine the patience the drivers have to get down Main Street in the morning. Even with the horn honking, people didn’t seem to realize that they should move out of the way of a car! I always worry that they’ll retire these vehicles someday, but they are such a neat offering while they last. Have you ever ridden on any of the Main Street Vehicles? My first stop was the only FastPass+ I had booked for the morning–a ride on the Haunted Mansion. It is my favorite ride, but my daughter isn’t a huge fan, so we rarely go. (The only part she doesn’t like is the part going backwards–the rest of it, that’s fun.) Outside, I was glad to see that the Pet Cemetery had survived fairly well after the hurricane. Lots of the trees are gone, but the statues are still there–including this hidden gem. Speaking of hidden gems, as you’re walking past the Rapunzel area, make sure to look at the hoofprints from the horses. Some of them have a unique “character” to them. At this point, I had absolutely no plans other than wander around and see what looks good. I hadn’t planned to ride it’s a small world, because that’s one that kiddo insists we ride on every week, but my resolve to skip it was confirmed when I saw the posted wait time. I figured that I probably should grab a FastPass+ time if there’s anything else I wanted to ride, so I hit up the kiosk instead of using the app and grabbed one for the Little Mermaid ride. I had about 45 minutes to spend while I waited for that, and so I decided to catch a movie. Whenever I go to see PhilharMagic, I love sitting in the back and watching the audience reaction to the effects. Even though this attraction has been around for a while, it still gets great audience reactions every time. While the crowds were moving out, I stopped in the gift shop to get a few photos for the merchandise article I was working on. I love the decorations in this gift shop so much. It was still too early to take advantage of my FastPass+ time, so I got in line for the Carrousel. I can’t remember the last time I rode it, but nothing says “Mom’s Day Off” like riding on an old-fashioned merry-go-round, right? I love the look of each of the horses being so unique. The ones right behind me cracked me up–especially the expression on the horse on the left. It was now time to go ride Mermaid–another ride we tend to skip because kiddo doesn’t like going backwards in that one either. It isn’t a favorite ride of mine, but I hadn’t done it in a while, so I figured why not. It’s cute, but I don’t think I’d miss it if it went away. What do you think?

Next stop was Tomorrowland. I had intended to do a quick swing on the PeopleMover and then head out, but the line was pretty long. As it was approaching the lunch hour, I figured if I waited another 10 minutes or so, the line should drop a bit. Now where could I spend some time while the line went through some progress… This attraction has one of my favorite hidden tributes of almost every ride. See if you can find it the next time you’re in–there’s a tribute to Marty Sklar on the ride. If you know where it is, feel free to mention it in the comments (but don’t mention where it is so people can have fun looking for it!).

The line for the PeopleMover was now much shorter, and so I went on for a quick tour of Tomorrowland. A couple times the ride shut down, and we rolled backwards for a way, which was cool. In the tunnel near Buzz, the ride shut down and the lights went on. I thought I might get to have an evacuation experience, but the ride moved after just a few moments. Even though the calendar says it is fall, it was still a very warm day in the Magic Kingdom, so I decided to grab a drink and sandwich from Starbucks and head on out to get back to “real life”. But of course I had to do the obligatory castle shot on the way out. At the time of this post, I work a full-time 40 hour/week job, a 20-hour/week (or more) part-time job, manage the blog for TouringPlans, and do writing here as well. And while I cherish the time I have with my family outside of those work hours, every now and again  it is fun to have just a morning out solo. It just goes to show, no matter what you’re doing, it is always possible to have the Best Week Ever.