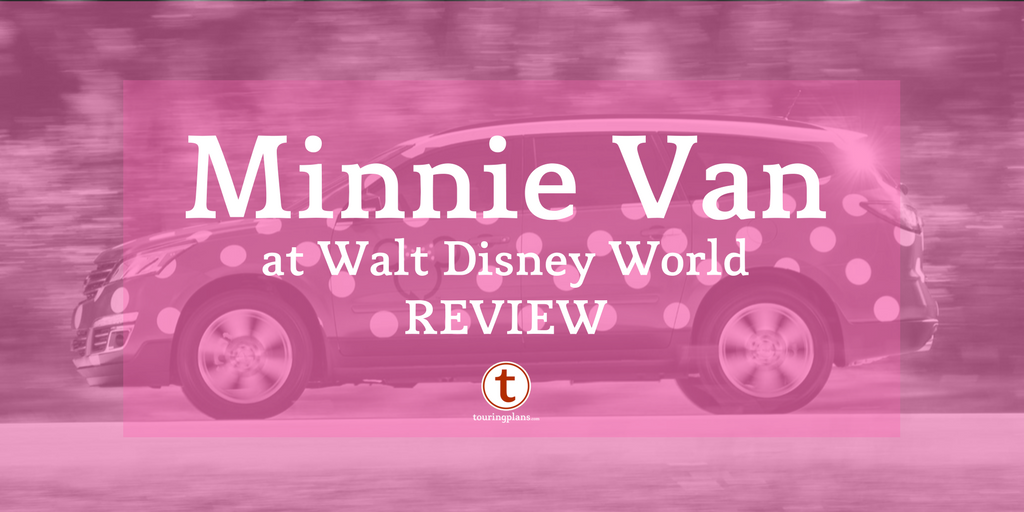 When Disney announced Minnie Van service at D23 this summer, I was skeptical to say the least. Ride-sharing services like Uber and Lyft are already my transportation of choice both at home and at Disney and cost less. So what are you paying for, the cute paint job?

But after using the service, I can say there are some scenarios where it definitely makes sense.

Why Choose a Minnie Van

Most importantly, your Minnie Van will seat 6 and will have 2 carseats in it. If you are traveling with more than three in your party, you’re already going to need to upgrade to a larger car (at a higher cost). And with the van, there’s no need to request a carseat.

Two of the vans are accessible, and can be requested. This number should increase as the service moves out of its test period and expands across Walt Disney World Resort. There are 25 regular and 2 accessible vans in service right now.

Another advantage to the Minnie Vans is that they have designated drop offs in convenient locations. So, if you want to take one to Hoop de Doo at Fort Wilderness and don’t want to go through the labyrinth of buses or boats to get to Pioneer Hall, just hop a Minnie Van and go straight from your resort to the bus stop right by it.

Want to be dropped off close to your hotel room instead of at the lobby? The Minnie Van has you covered.

Just want to travel from resort to resort without a bus transfer? A Minnie Van will save you all kinds of time.

Disney has made sure that guests know that even though the Minnie Van service runs through Lyft (more on that later) the Minnie Van drivers are all vetted by them and are not the usual independent drivers you would get without the service. Me, I take cabs and other services like this all the time and don’t worry about it, but if you’re new to this sort of thing, you’ll probably find this comforting. (Secret: many of the drivers for the ride-sharing services around Disney are cast members working on their off hours or family of cast members working for a few extra bucks.)

How To Use a Minnie Van

So how does Minnie Van service work? Well, as of this writing, it technically isn’t offered at every resort. I used it after Epcot closed when I was at International Gateway and didn’t want to walk to the front of the park and then wait for a bus back to All Star Music. Because I knew Minnie Van service was offered at Boardwalk, I headed over there knowing that even if I couldn’t get one, I could always get another car service. We first went to the valet because we saw I placard about the service there and asked how to get a Minnie Van. The attendant asked if we were staying at Boardwalk, and when we said no, she said we wouldn’t be able to use the service. This is a lie.

We then went to Bell Services and asked them to enable Minnie Vans on the Lyft app on my phone. I gave them my phone and they texted the unlock that brings Minnie Vans to life for you.

I opened the app, chose our pick-up location and destination, chose “Minnie Van” as the type of Lyft, and agreed to the $20 flat fee that the ride would cost. The app reminds you that Disney employees aren’t supposed to accept tips.

The Lyft app shows you where your driver is and gives you an ETA for when the driver will arrive. You’re also told the number of the van (it’s painted on the side of the van) and its license plate number.

In three minutes, I got a text saying our van had arrived just as the driver pulled up. Our driver was super friendly and we were back at All Star Music in less time than it would have taken to walk to the bus stop, wait for said bus, and travel back. I had a receipt for the trip emailed to me. Lyft does allow you to add a tip to your trip, despite the tip reminder. We tipped in cash, so I can’t speak to what happens if you try that or if the driver receives it.

Here’s what you need to do before you try out Minnie Van service yourself:

Are you tempted to use Minnie Vans instead of other Disney transportation or your own car? Do you have questions about how Minnie Vans work? Talk about it in the comments.