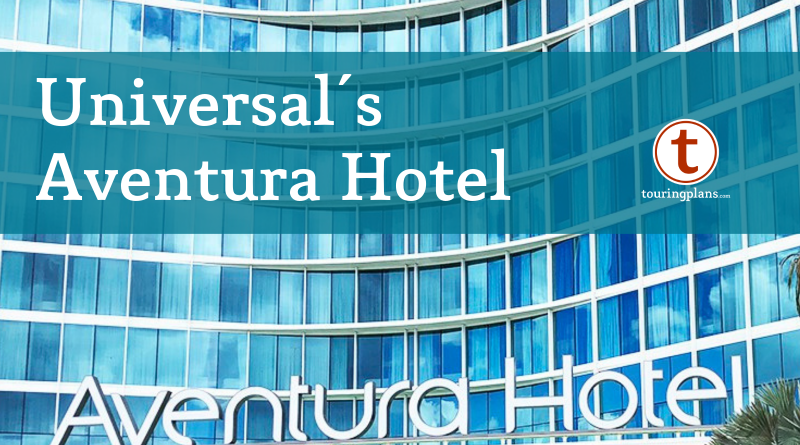 Universal’s Aventura Resort is the brand-new hotel that opened on August 16 at the Universal Orlando Resort. The relatively small 600-room tower is the sixth on-site hotel at the resort and is smack in between the two hotels that came before it, Sapphire Falls and Cabana Bay.

By sheer luck, I was in Orlando for the first Mickey’s Not-So-Scary Halloween Party — August 17 — and decided to switch theme parks and head over to Universal for the night of the August 18, the third night of Aventura’s operations. Overall I was impressed, as I have been with much of Universal’s lodging options, but you know I have a lot more to say than just that, so let’s break out some categories. Aventura is pretty noticeable from a distance as it is one of the taller structures at Universal (possibly the tallest, but I haven’t really checked). The 17-story, curvy, all glass tower is striking in a good way and the curves everywhere mean the light shines off of it in interesting ways without sending blinding Florida sunshine directly into your corneas.

The parking garage for the hotel is directly adjacent to it and has an elevator that takes you straight to the lobby. Walking through a parking garage is never a great first impression, but compared to a very long walk across a massive parking lot away from a car that you know will become an oven capable of melting most metals, I’ll take it.

The lobby itself is my least favorite area of the hotel. There isn’t anything particularly wrong with it, but there isn’t much design to it either. The check-in area, lobby bar, Starbucks, and Urban Pantry food court are all located in the large open space separated by tinted glass dividers. I like the look of some of the furniture and the glass dividers, but the larger areas remind me of a decent airport: clean and functional but not particularly memorable. That said, there is no circumstance where I would not recommend a hotel because of underwhelming lobby design.

There are three basic room options at Aventura: a 314 square foot standard room, a 395 square foot deluxe room, and a 575 kids’ suite with 2 twin beds and 1 king. Within any of those you can opt for the slightly more expensive “skyline view” which will guarantee a room on the upper floors. Pricing is similar to Cabana Bay with rooms starting at $116 for a standard and $216 for a suite. Obviously those prices go up depending on season and day of the week.

In contrast to the lobby, the room I thought was a very well decorated, modern room. The room is uncluttered, but has a wide range of contrasting fabrics and textures. Personally I could do with a little more color, but that’s a nitpick. The lighting, glass screen separating the bathroom, and the single papered wall in the entry are all both contemporary and comfortable. The standard room I had did feel small, but that is in line with the price so I expected nothing different. Technically the room is a little larger than a Disney Value Resort, but with the extended entry it felt similar in size.

The bathroom is also small with only one sink. Rooms also come with only a walk-in shower, which could be an issue with smaller children. Like the rest of the room, the bathroom is nicely decorated although I can see the translucent screen between the sink area and the sleeping area being an early wake up call when the first person flips on the light in the morning to brush their teeth.

A better wake up call is looking out the window of this high tower. My room was on floor 9, and I don’t know if that qualified it for the “skyline view” or not, but the view was wonderful. I was facing directly toward the theme parks and the glimpse of Hogwarts castle, Dr Doom’s Fearfall, and the Hulk and Rip Ride Rockit coasters zipping around definitely made me want to head into the park.

Aventura is positioning itself as a technologically forward hotel, although that seems to be mostly tablet-related. In the room, for instance, there is a tablet on the nightstand that controls some of the lights as well as the television. You can also order room service through it and see details about the hotel and the Universal resort. While a very cool feature that I think kids will love (too much), I could not find a standard remote for the TV, so I fear the day when the tablet inevitably breaks. (Making the tablets totally free-roaming from their charging station seems like asking for trouble.) It is possible that there was supposed to be a backup remote in my room but there was not.

One absolute bonus feature of the tablet and TV setup is that it allows you to log into both Netflix and YouTube with your own account so you can watch either through the television. This would be a major selling point to my children and many others, I assume.

The other point of touchable tablet tech was in the elevators which eschews buttons for a touchscreen. Once again, I fear the day someone gets a little overzealous and breaks the screen. I also fear the day I forget my room key running to the lobby because the elevators will not go to any floor but the first floor unless you scan your key. An understandable security feature but a silly one when I am trying to go to the fitness center on floor 2 from my room on floor 9 and I still need to scan first. Like the rooms, the pool area is mostly small but sweet. The pool itself curves around the focal point, the pool bar, with the curve ending in a decent-sized splash pad area for the little ones. There is a hot tub but no water slide like you get at its two neighbor hotels, one of which — Cabana Bay — is very visible from the pool area.

The reason I said pool area was “mostly” small is because the pool bar, Sol, has a very large patio with many seating areas and a high ceiling. The covered area means it is a good respite from the inevitable weather and it creates a welcome wind tunnel that helps keep the summer heat at bay.

In my opinion, this is the section where Aventura bumps itself up a few notches. I mentioned the bar Sol, the pool bar which has several beers on tap as well as cocktails. Just inside from the pool are three more spots. One is another bar, the Ventura, which carries a similar selection to bar Sol with the exception of being inside. The second is a full-service Starbucks, great for that pre-park morning, and the third is the food court, Urban Pantry, although “food court” almost sounds insulting.

The Urban Pantry contains four food stations: sushi, burgers, meats, and pizza. Unfortunately I only tried the burger, but based on that and what other guests told me I feel comfortable in saying that the food is of very high quality. Everything is prepared as fresh as reasonably possible and, naturally for Universal, alcohol is also served at all stations. I would happily eat lunch here on a break from the parks.

The showpiece of the entire hotel, however, is Bar 17 Bistro on the roof of the tower. I ended up spending more time there than I expected because the views, the service, and the food were all very good. The only complaint I have is that to get to Bar 17 you have to take the elevator from your room all the way to the lobby, then a separate elevator back up. They do this because there is an employee manning the Bar 17 elevator to regulate the number of people up there, but it is still a bit annoying.

The night before I was there they had some terrible technological issues that impacted service very badly. Well, during my first trip up there (once in daylight, once at sunset) the same issues popped up again. It took about 45 minutes to get my check, but to make up for it I was given a free beer and the food that I ate was removed from the bill. A new place will always have issues; in my opinion the resolution of those issues is more important and I felt very well compensated for the problem. Of course, if this becomes a regular occurrence that will be a different sort of problem but that is for them to sort out. Bar 17’s menu centers around bao buns, which are a favorite of mine anyway, so naturally I tried a few. The bao are 3 for $12 and you are allowed to choose any 3 from the dozen or so on the menu. My favorites were the pork belly, lamb, and duck confit, although I did not try the vegetarian which I heard great things about. The views from the roof were very nice although there isn’t much of a theme park view to be seen. For some reason, I don’t have photos of the view, but the last several minutes of the video that will be posted on our YouTube page (and below) tomorrow (Thursday) morning are dedicated to Bar 17 with plenty of the view both in day and night.

There are two main options and one slightly out-of-the-way one when getting to the parks. The main two are the bus and your feet. The bus picks you up at regular intervals right outside of the hotel and deposits guests near the security checkpoint for CityWalk. The walking path winds along Sapphire Falls and Royal Pacific before popping out near Margaritaville in CityWalk. The bus is only few minutes ride but you still have a several-minute walk through CityWalk to get to the park entrance. The walking path will take 15-20 minutes to Islands of Adventure with Universal Studios being 5-8 minutes further.

The alternate way is to walk into Sapphire Falls, which shares an entrance driveway with Aventura, and take the boat from there. It is probably slower than either way listed above, but will have the least amount of walking to get to the park entrance, especially Universal Studios Florida.

Would I Recommend and/or Stay Again?

My last two stays at Universal have been at Aventura and Cabana Bay and I liked both much more than I expected to. The prices are excellent and the dining and amenities are more in line with Disney Moderate Resorts than their Values. The only reason I prefer the Deluxe resorts at Universal — specifically the Hard Rock and Royal Pacific — is because they are closer to the parks and come with the included Express Pass. (Aventura, like Sapphire Falls and Cabana Bay, only includes Early Park Admission, not the Express Pass.) If, however, I was planning a cost-conscious trip to Universal and using Touring Plans, which offset the need for the Express Pass, I would totally stay at Aventura again. The only hard choice is between here and Cabana Bay. (I haven’t stayed in Sapphire Falls yet.)

I will have both a resort tour and a room tour video out, the former tomorrow, August 23, and the latter the following day. Please check those out on our YouTube page.

One thought on “Review of Universal’s New Aventura Hotel”