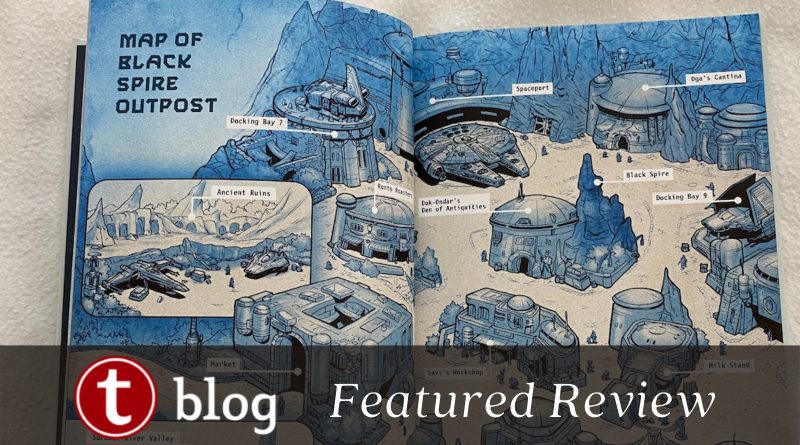 I write a travel guide for a living (our very own Unofficial Guide to Disneyland 🛎), so when I found out a guide book was being produced for Batuu, the fictional planet where the Star Wars: Galaxy’s Edge land in Disneyland and Walt Disney World is located, it had triggered my curiosity as to what type of book this would be. Would it be a typical Disney guide book written in a matter-of-fact way? Would it be written as a behind the scenes look at the land, similar to those Imagineering Field Guides from a few years back? Turns out the book is written in character, as if someone living in the Star Wars universe was planning a trip to Black Spire Outpost on Batuu. I love that idea. Is the Traveler’s Guide to Batuu a compelling book, or does the novelty wear off quick? I’ll get in to that later, but first let’s take a look at the book. 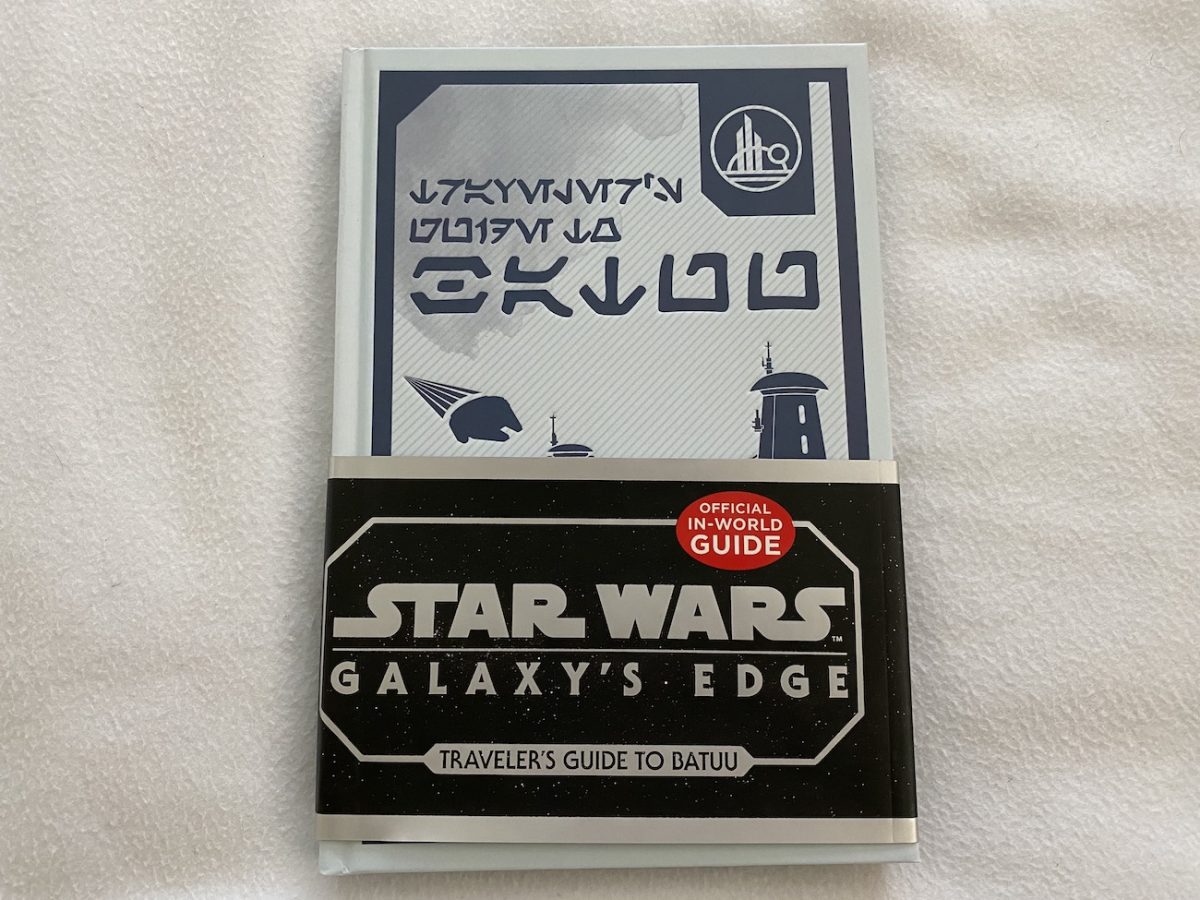 The cover of Traveler’s Guide to Batuu features a nice design that isn’t too busy with graphics. The aurebesh font (the writing system used in the Star Wars universe) helps the book have an appropriate feel. 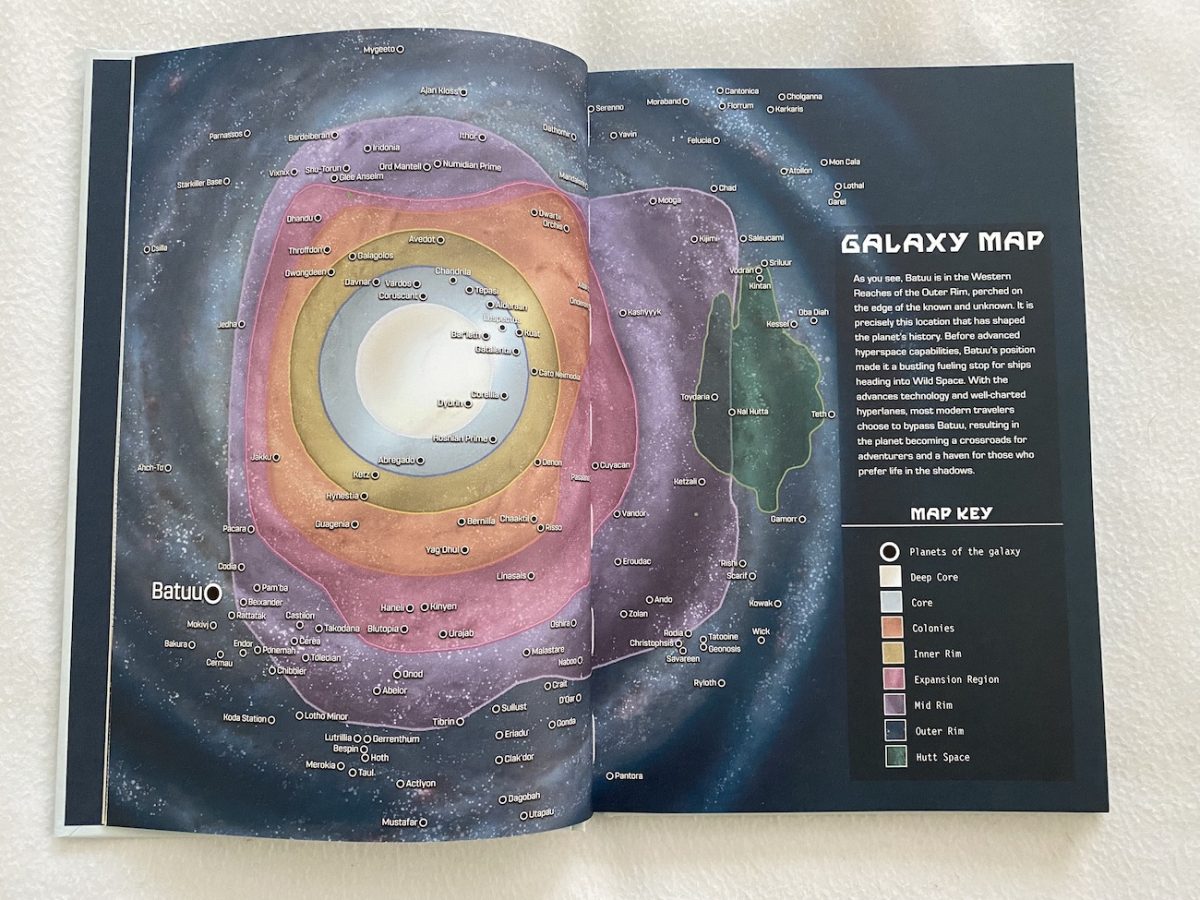 Here you can find a map showing where Batuu is located in the Galaxy. You’ll notice it’s located in the Outer Rim, not too far from familiar Star Wars locations like Endor and Mustafar. 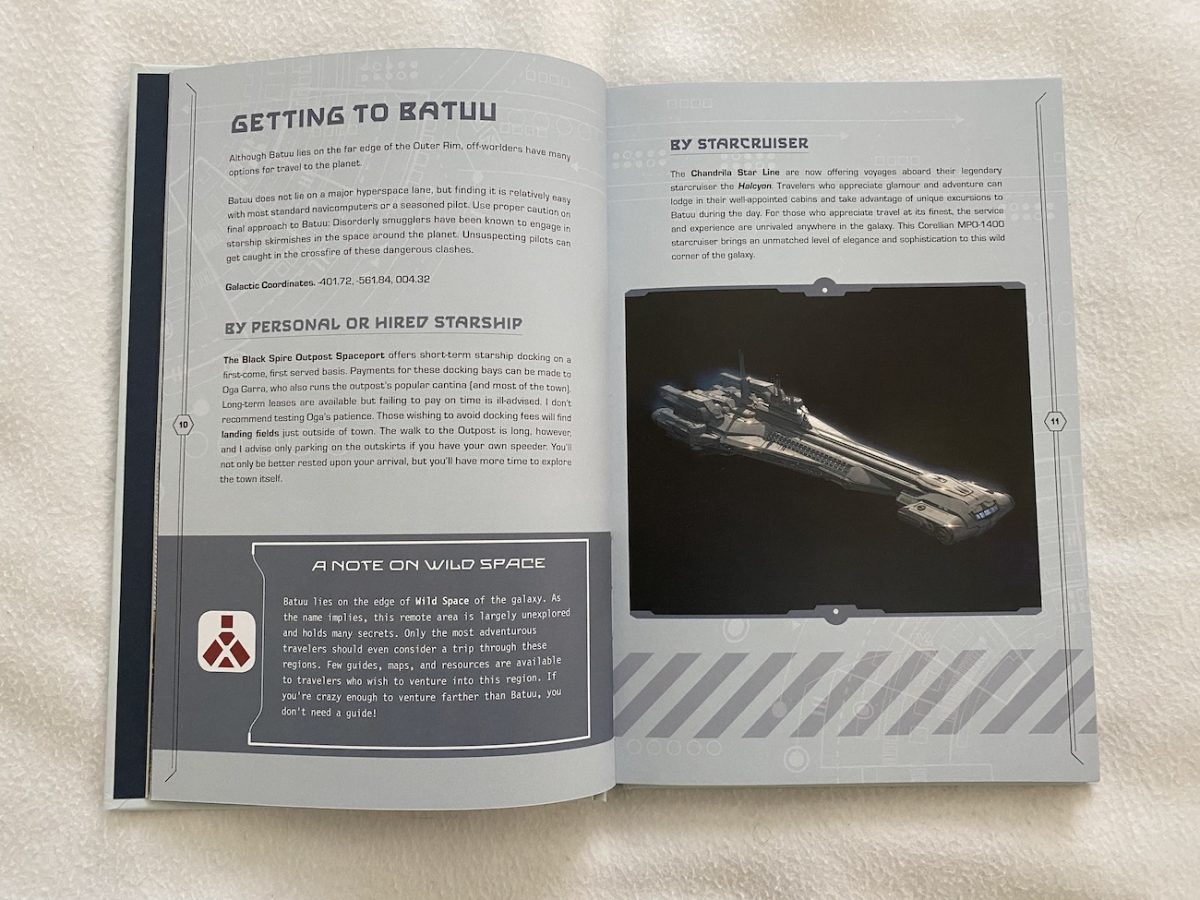 Like many guidebooks to exotic locations the book contains a section about how to get there. On the right you can see page about getting to Batuu via starcruiser, specifically the Halcyon. This ship is the same one guests can stay in when the immersive Star Wars: Galactic Starcruiser hotel opens next year in Walt Disney World. 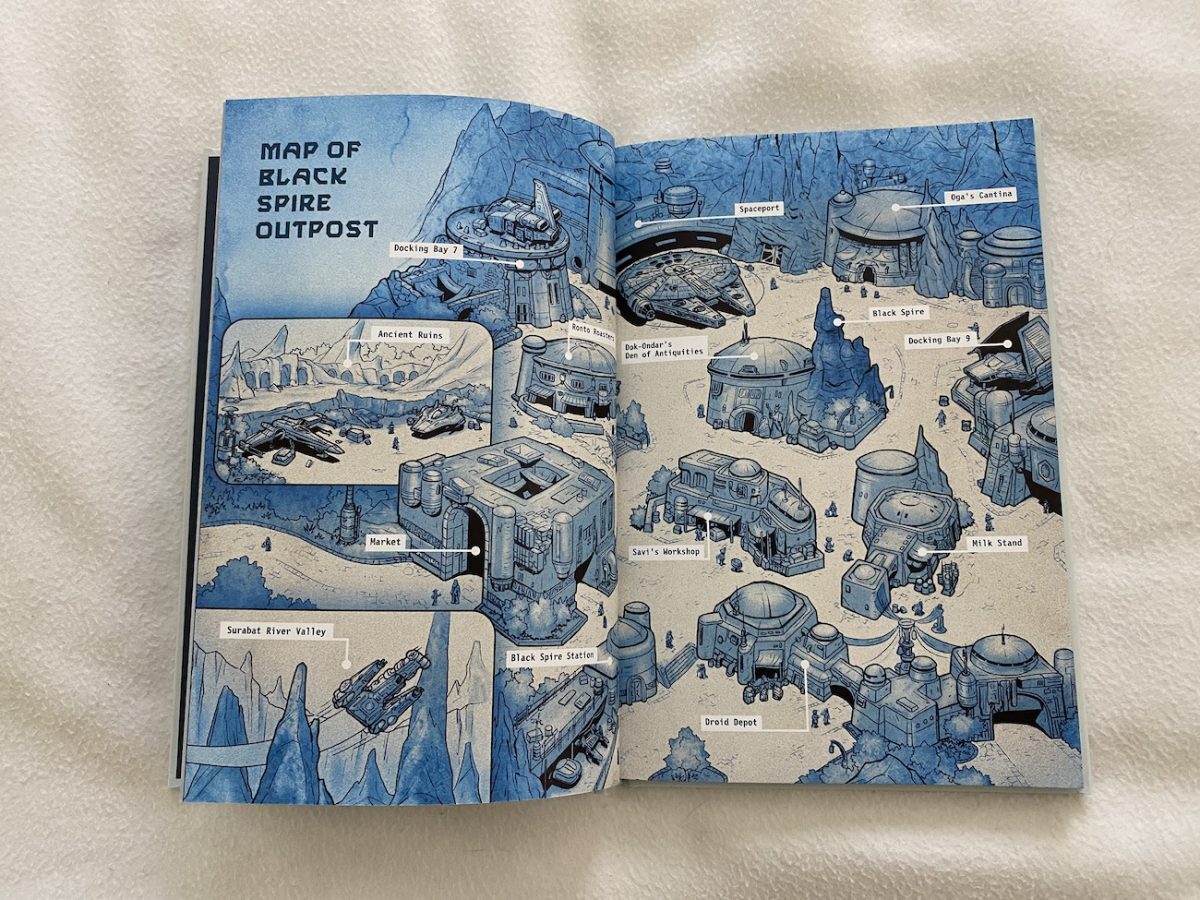 A map of Black Spire Outpost. Now is a good time to mention all of the original artwork made for this book. They could have gone the lazy route and used regular images or the land, or reused promotional graphics seen in advertisements, but they really went all out and it makes the book feel like a lot of care was put in to it. 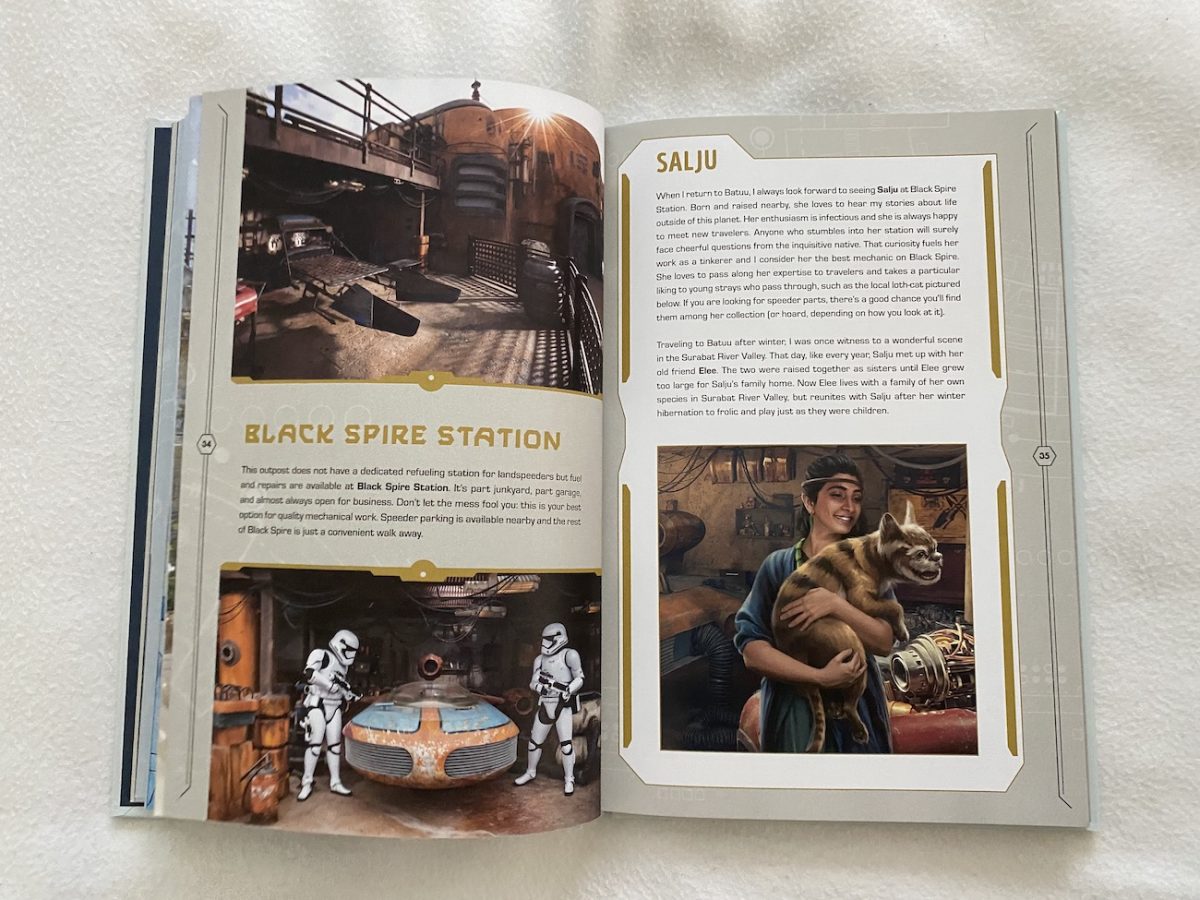 Everything in Star Wars: Galaxy’s Edge has a story to it, but it’s not obvious if simply visiting the land in real life. The Traveler’s Guide to Batuu fills in all the bits a pieces you may not know about, including the names of all the various shops and stations found throughout the land, as well as information about each location’s proprietor. 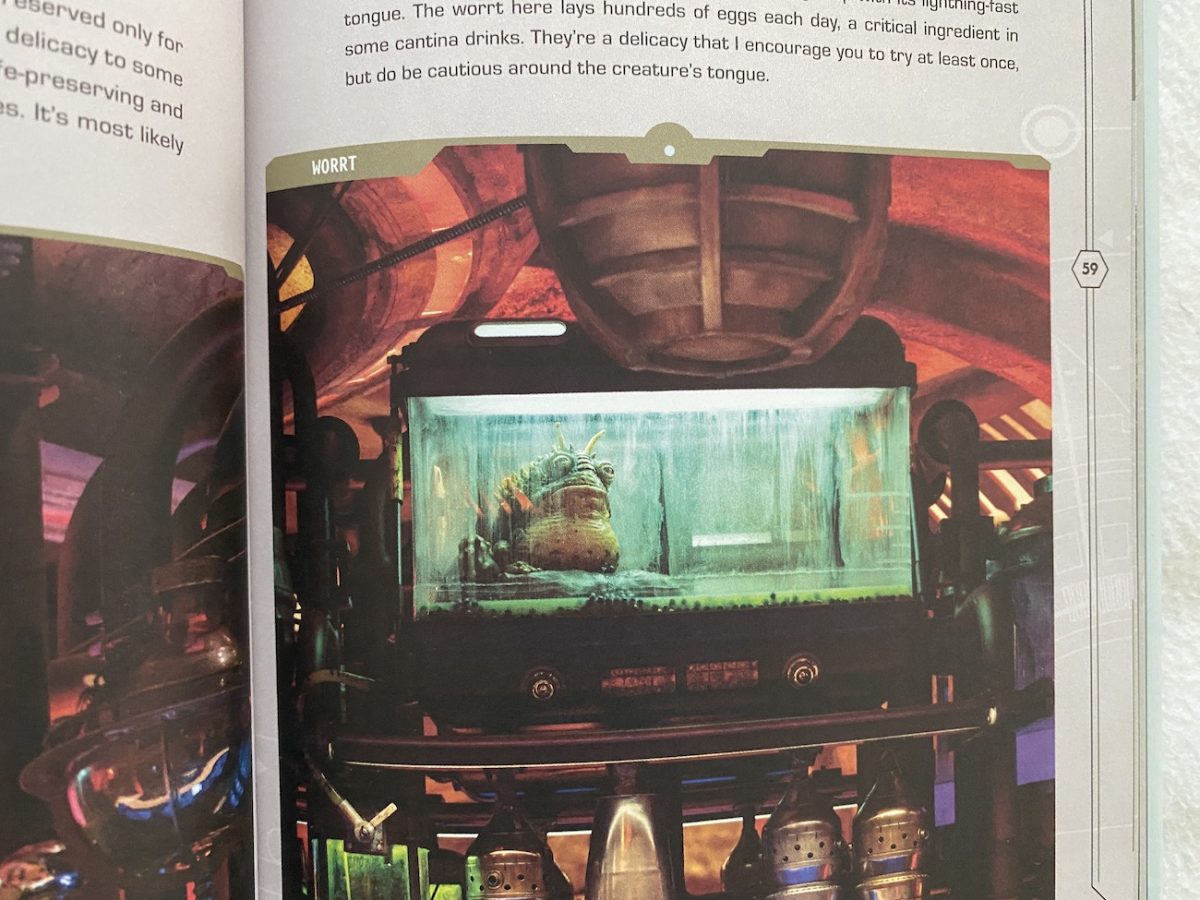 The section about Oga’s Cantina features a glorious picture of a worrt. You have to love those things. Why is there a worrt in Oga’s? The eggs that the creature produces are used to create the bar’s signature Oga’s Obsession dessert. 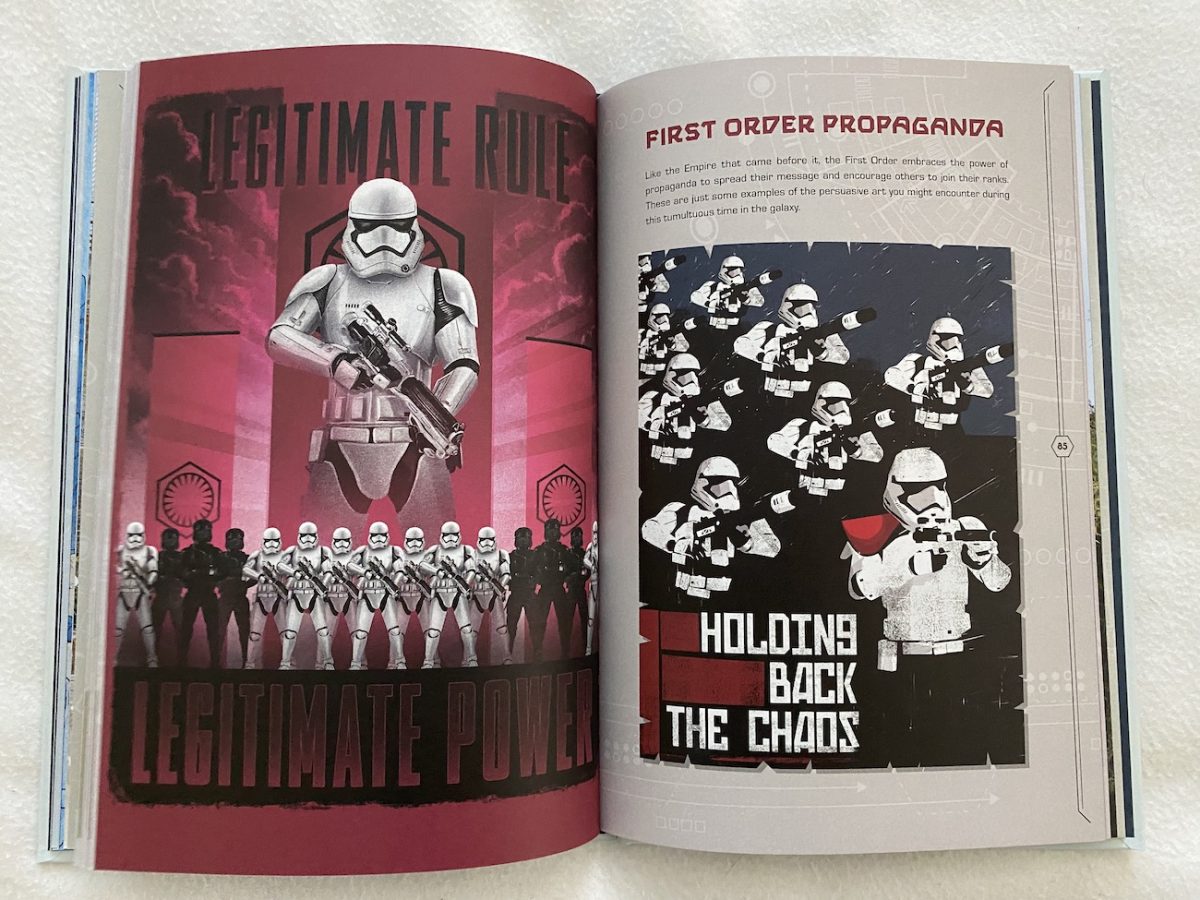 The book also explains why the various retail locations in the land stock the items they sell. For example, First Order Cargo sells artwork because it’s First Order propaganda used to spread their message. 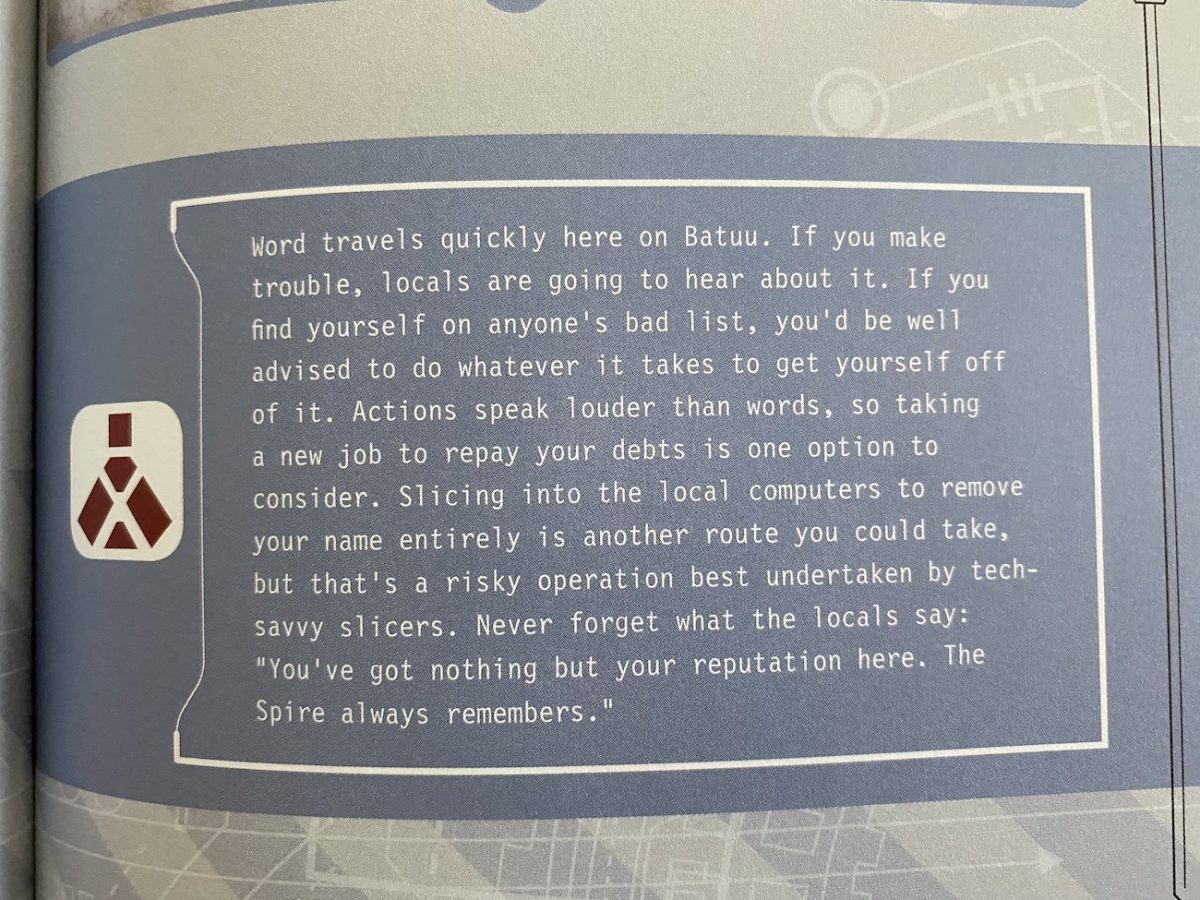 The book makes vague mentions to the Datapad game that is a part of the Play Disney Parks app. 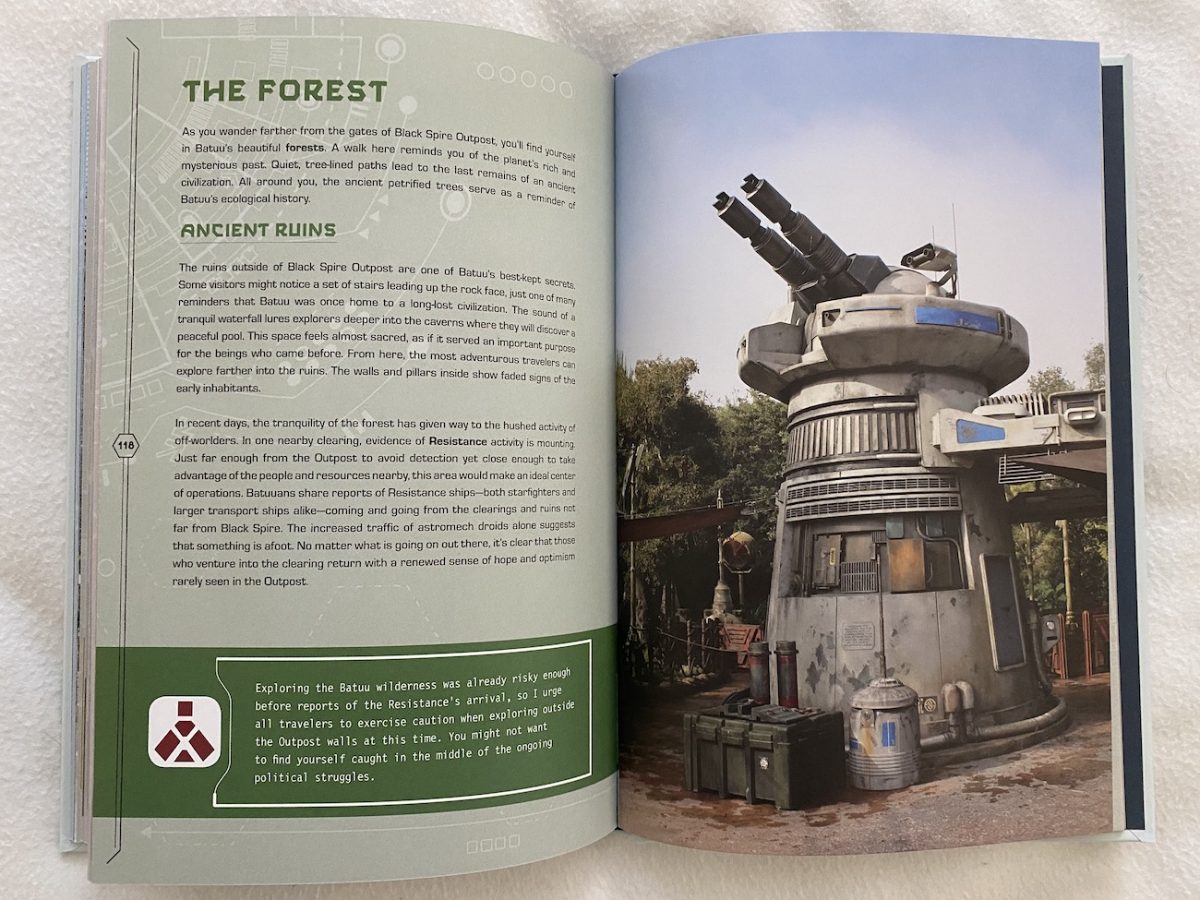 To keep with the theme of the rest of the book, attractions such as Rise of the Resistance and Millennium Falcon: Smugglers Run, are not outright referred to as rides. I enjoyed reading these descriptions from the point of view of a random galactic citizen. 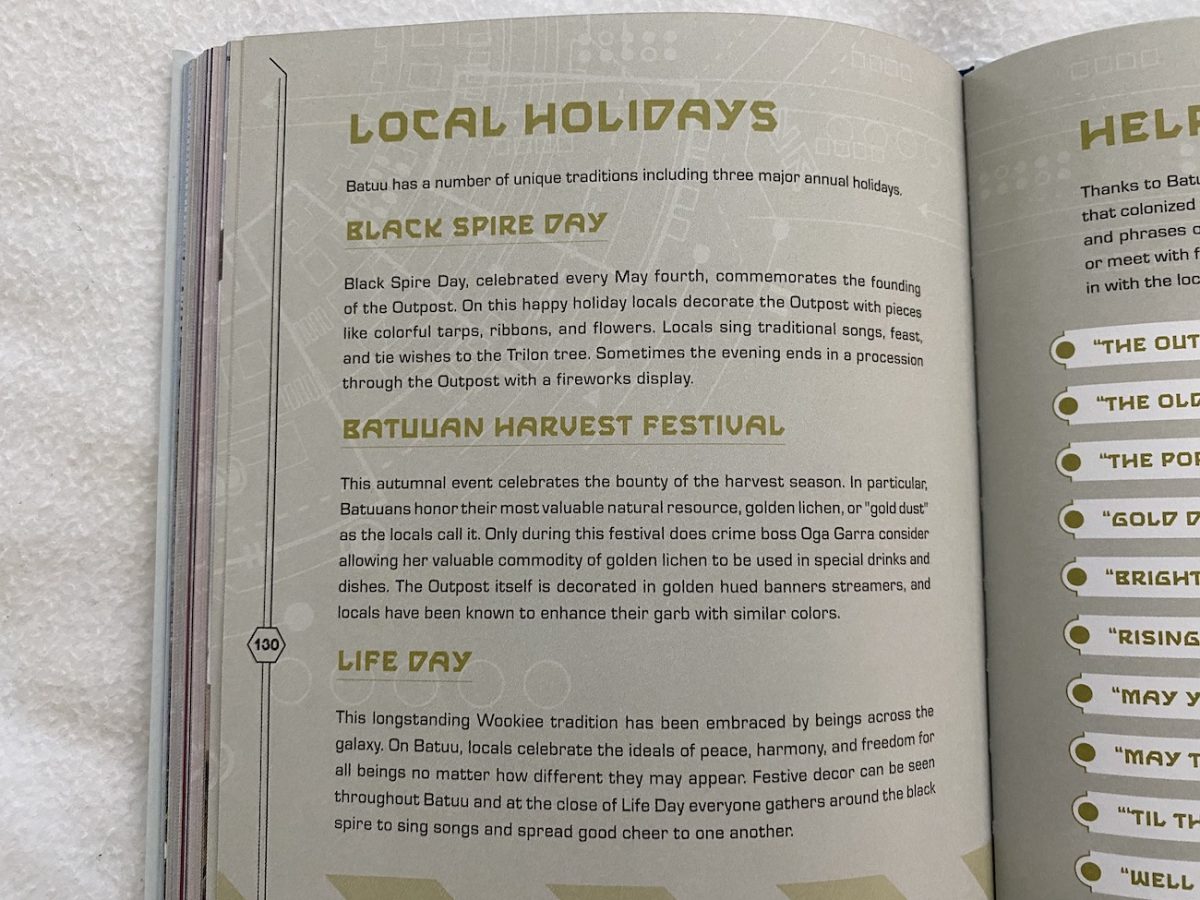 When traveling it’s always good to know the location’s local holidays. Batuu is no different. Hopefully these holidays are a hint of what weIf ‘ll see in the land at Disneyland and Disney’s Hollywood Studios soon. 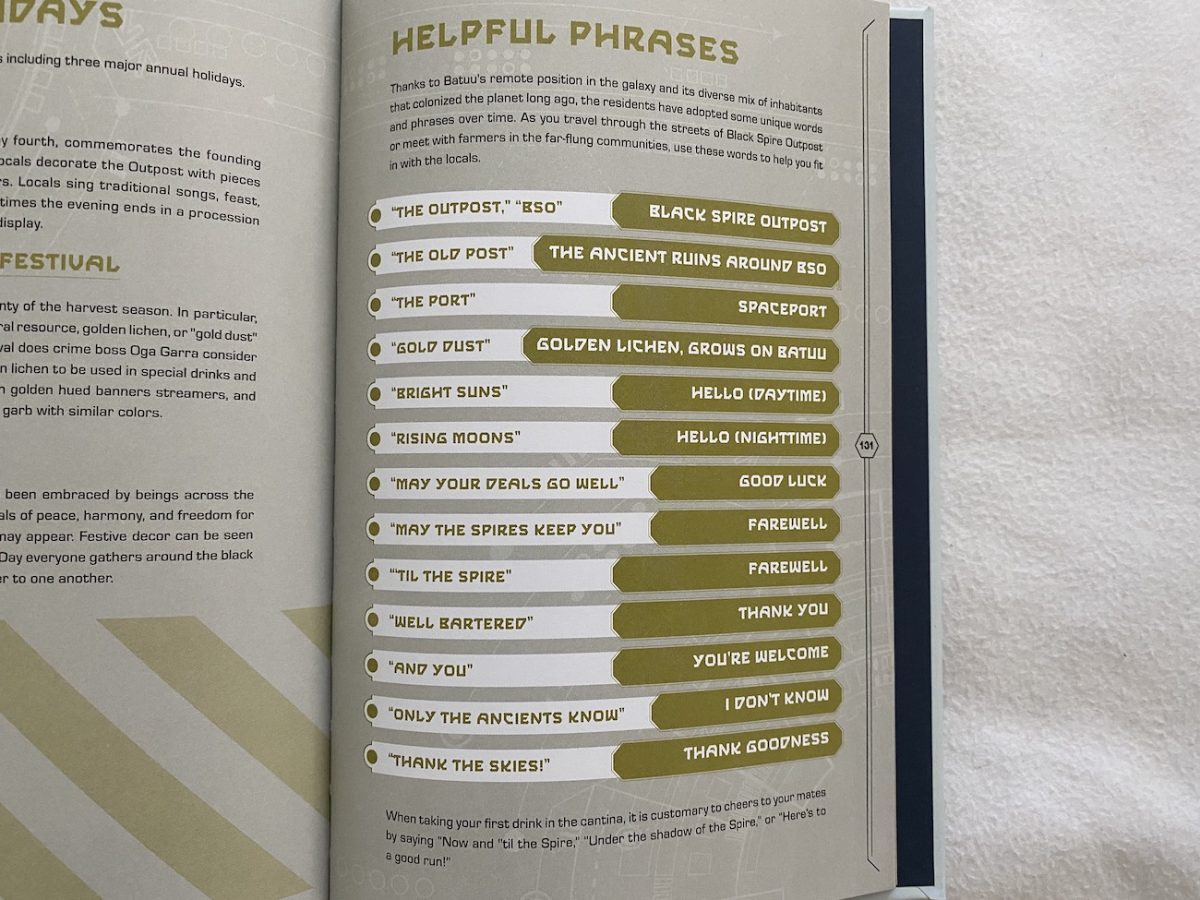 If you’ve visited Galaxy’s Edge you no doubt heard “Bright Suns” as a greeting or “Til The Spire” as a goodbye. There’s many more phrases the inhabitants of Batuu will say and this helpful page lists them all. 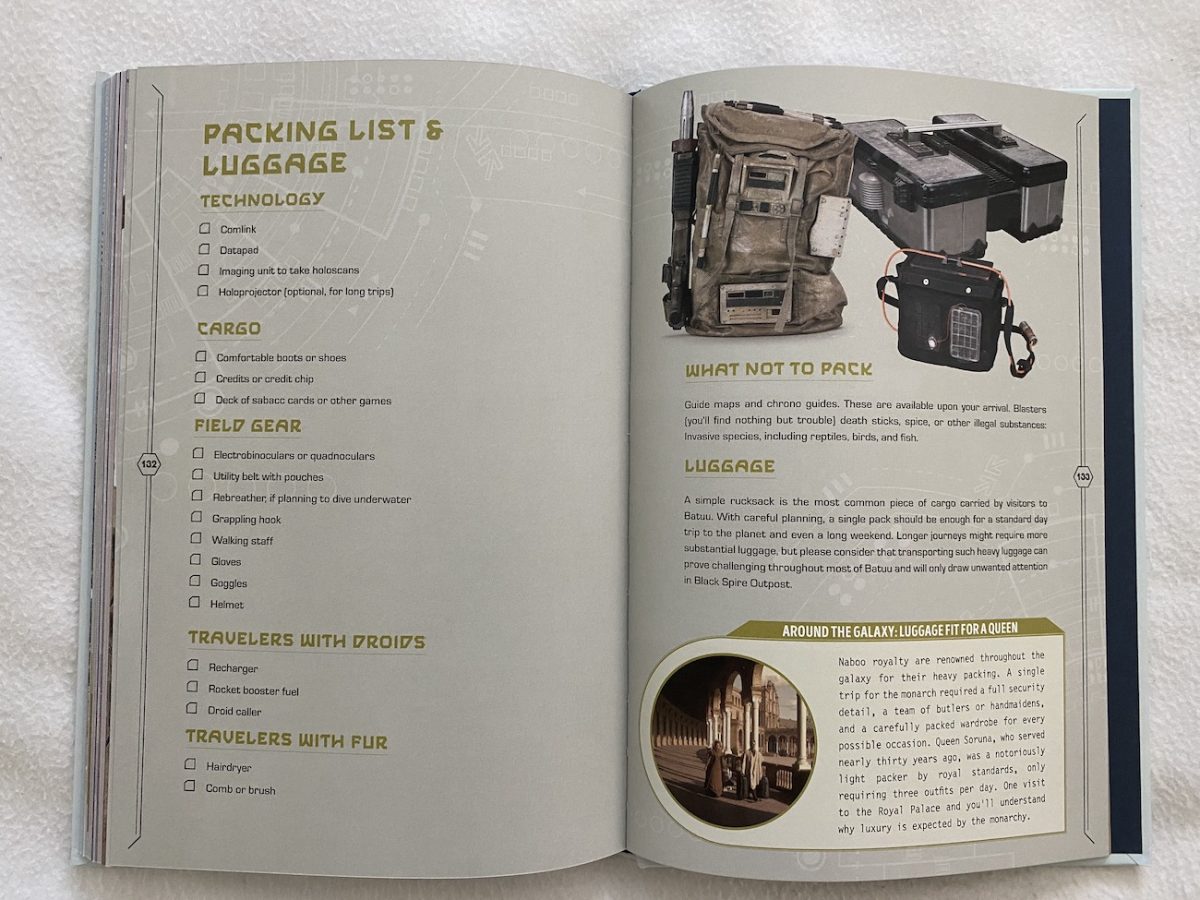 Packing lists are a staple of many travel guides and the Traveler’s Guide to Batuu is no different. This is one of my favorite details in the entire book. Don’t forget to bring your grappling hook. 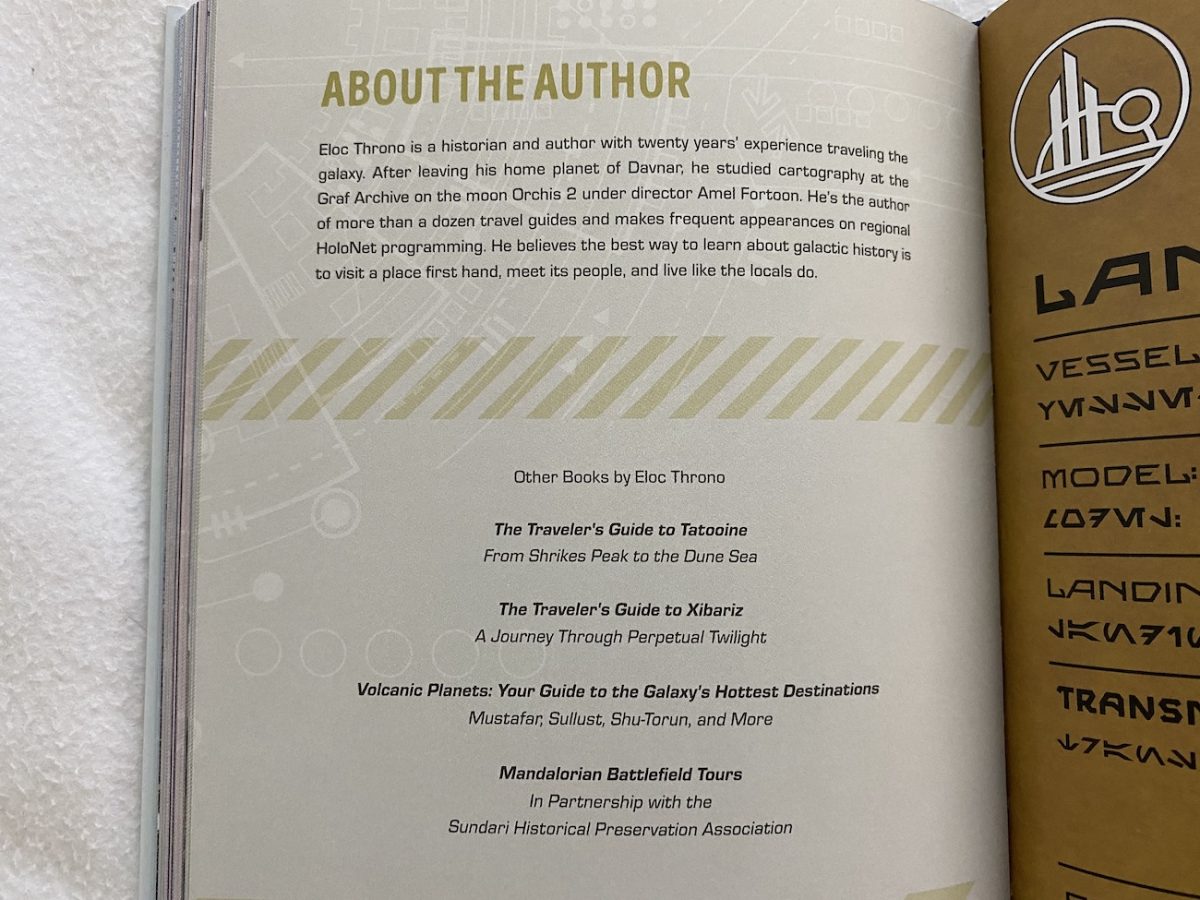 Another detail I love, even the About the Author page is appropriately themed.

Now to answer the question, is Traveler’s Guide to Batuu worth it? If you’re a Star Wars fan that enjoys Galaxy’s Edge then this book is a must buy. It’s succeeds in expanding the lore of the land, as well as tying it in to the rest of the Star Wars universe. Also, at only $20 (not to mention Amazon and Target currently discounting it below cover price) they could have done this quick and cheap, but every page shows effort. It’s clear a lot of love went in to producing Traveler’s Guide to Batuu.

Link: As of press time you can purchase Star Wars Galaxy’s Edge Traveler’s Guide to Batuu for only $17.99!

Will you be picking up the Star Wars Galaxy’s Edge Traveler’s Guide to Batuu book? If you already have it let me know what you think in the comments below.