Today’s SATURDAY SIX is an annual tradition. Six Disney Gifts Santa Can Bring Back to the North Pole (AKA The Best of the Disney Outlet Stores in 2017). By now many TouringPlans blog readers know every single weekend brings an edition of the SATURDAY SIX. Some look at the world of Disney, some look at Universal, and some are just next level bananas. Some readers of this fine weekly column may not know that we also have The Magic, The Memories, and Merch! where every single month for over four years we have braved the insanity of the Orlando Premium Outlet parking lots to cover the two Disney outlet stores in Orlando. In fact, we even had a very special Four Year Anniversary edition with some special comic strips to celebrate the momentous occasion.

Now, while some Christmas dreams do come true, such as Ralphie Parker getting his official Red Ryder BB gun and us Americans being able to say “Merry Christmas” again (although for the life of me I can’t remember a time when we couldn’t,) other Christmas gifts deserve to go straight to the Island of Misfit Toys. Today we will take a look at some of those very items, starting with…

# 6 – That Creepy Beauty and the Beast Belle Doll

Sometimes at the Outlets I have to pinch myself to make sure I’m not dreaming. Earlier this year, a picture of the world’s worst looking Emma-Watson-as-Belle doll went viral on Twitter. As many people have pointed out, it looks more like Justin Beiber in drag than anything else. I’m actually reminded of those Lawrence Welk skits on Saturday Night Live featuring the Maharelle sisters.  I almost cried tears of joy actually seeing this arrive at the Outlets. Originally $34.95, it was reduced to $19.99.

I’ve always thought the Metal Earth displays I’ve seen in stores such as the World of Disney in Disney Springs make the product look really cool. Usually in a protective case Disney will have several pieces put together, including park specific items like the Magic Kingdom’s Cinderella Castle or Mickey’s Fun Wheel in DCA. This year several pieces of Star Wars Metal Earth hit the Outlets, and as a Star Wars fan I was excited to try it out. I picked up the Landspeeder one. For some reason it was labeled “Disney Parks Collection,” which is interesting because I’m not sure if a Landspeeder is represented anywhere at a Disney park on Earth.

Upon opening up the package, I unfolded two pages of directions straight out of the IKEA handbook, and two sheets of metal.

After 20 minutes I got a grand total of one piece separated from the metal sheets, almost losing two fingers in the process.

Even though Captain Cruiseline (@TheDCLBlog) assures me that these Metal Earth pieces can be put together (as long as you have the $3,000 tool kit given to Platinum Castaway Cay Club members,) I ended up creating a Star Wars Toy after all. Originally $16.99, this was reduced to $5.99.

I could live 100 more years and still never understand how much merchandise is put out to support the Disney Turkey Leg. Yes, it is certainly one of the most iconic snacks in all of Disney, but it’s also kinda disgusting. This year I saw an item at the Outlets I can only describe as a Turkey Leg prop. I don’t know what you would do with it other than display it in your house, but I’m trying to wrap my head around someone actually doing that. Originally $13.99, now $7.99.

I don’t judge anyone for what they collect, no matter how weird it may be. But one of the hardest collections to wrap my head around is the series of Disney Shoe Ornaments. On this we have Disney characters represented through a high heel shoe, no matter how inappropriate. Such as the first one we’ll look at featuring Roz from Monsters Inc.

Here’s Jessica Rabbit with an Inception-like design as the heel of her shoe is Jessica’s leg wearing another high heel shoe.

Miss Piggy has been scalped for this one,

In 2017, one of the all time strangest Disney toys came to the Outlets to brighten our day and went immediately into the Disney Outlet Store Hall of Fame. The Sorcerer’s Apprentice Mickey toy arrived, and for some reason his hands are twice as big as they should be, but that’s not even the weird part. When you activate the toy, Mickey’s right hand goes up and down in rapid fashion making it look like, well, you know….

Watch the embedded video to see this toy in action.

Ever since Disney put out this “birthstone” pin set well over a year ago, I had been dying for them to come to the Outlets. The art for some of these Disney princesses is so off-model that it makes my drawing of Stacey Aswad in the Disney Must Dos video look photorealistic in comparison. Here’s a shot of Anna and Jessica Rabbit from the ShopDisney App.

When these items came to the Outlets they were labeled “Zodiac Broach Pins” and I got to see the magic with my own eyes.

Now, don’t get me wrong there were a whole bunch of incredible items that hit the Outlets this year too. The Festival of the Arts at EPCOT immediately became my favorite festival at Disney. One of the neatest things they had was a series of Figment magnets where the lovable dragon was used in recreating famous paintings. These were given to people who completed a scavenger hunt during the Festival. My favorite is the one where Figment is used in Edvard Munch’s The Scream.

Speaking of Figment, during the Great MagicBand Dump of 2017 there were some great Figment, Orange Bird and other MagicBands available on the cheap.

I don’t drink coffee, but I’m a fan of the Starbucks YOU ARE HERE design, and this year the awesome design from DCA made it’s way down here to the Florida Outlets. I would guess hundreds of different styles of coffee cups made it to the Outlets over the course of the year and this is the only one I bought.

Love these luggage tags, especially the one featuring the house from Up.

Several neat Disney notebooks hit the Outlets, including ones featuring Bambi and Pinocchio. The outside look like a recreation of the Little Golden Book series, and inside there is some nice artwork as well before you get to the actual notebook pages. 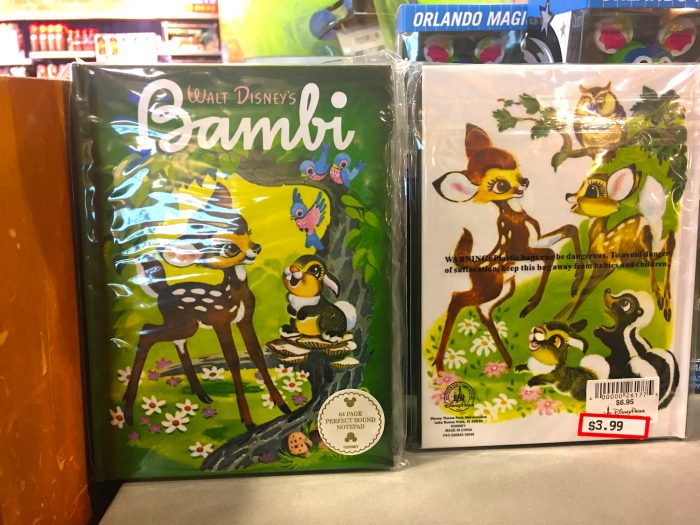 This is E-Ticket glassware right here.

Imagine my surprise seeing this Fort Wilderness keychain at the Outlets. I had literally just done an article on The Best Resort Specific Merchandise at Disney and it shows up. #blessed

All that and so much more can be found in The Magic, The Memories, and Merch! available on the last day of every month only at the TouringPlans blog.

2 thoughts on “SATURDAY SIX CHRISTMAS DAY SPECIAL: 6 Disney Gifts Santa Can Bring Back to the North Pole (AKA The Best of the Disney Outlet Stores in 2017)”