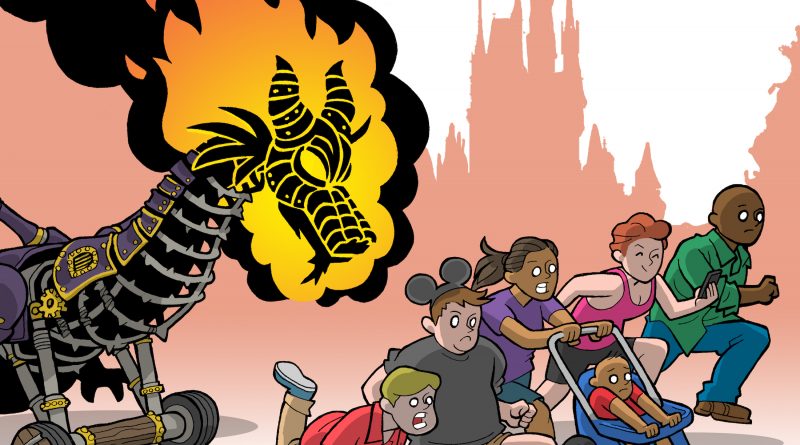 This week’s SATURDAY SIX is one of our favorites as we present the Fifth Annual Theme Park “Turkeys” of the Year. For Thanksgiving this week we took a look back at things both Disney and Universal fans should be thankful for, but today we are going to go the other way. Gather ’round as we continue the yearly tradition of awarding six Theme Park “Turkeys” to the craziest, most outrageous, or just downright weird stories of the year, concluding with the coveted Golden Turkey award. Let’s kick off the ceremony with a situation that which seemed to be orchestrated by the Queen of Hearts herself…

We got no food, no jobs, and our pets’ heads are falling off! – Lloyd Christmas, Dumb and Dumber

We’re one day removed from Black Friday, and everybody loves a good sale right? What if we were to tell you about a Grand Opening sale in which every store got a discount except the one that was actually opening? Sounds crazy, right? It happened this year though when Voodoo Doughnut officially opened its location at Universal CityWalk. This is like having a birthday party and the only person who isn’t invited is the person whose birthday you’re actually celebrating. This one is still hard to believe, even as seasoned veterans of DisTwitter.

Over the years we’ve shown the differences between the social media presence of Disney and Universal. While Universal is generally Johnny on the spot when it comes to staying relevant, such as a timely pizza fries tweet  on the same day as the country received its first Presidential emergency alert, Disney almost always plays it safe. That all changed in April when Disney posted the following tweet. Here at the SATURDAY SIX we’re no prudes, but that is the definition of next level bonkers. As expected, DisTwitter couldn’t believe what they saw. Not only was it crazy that Disney posted something like this, but the tweet stayed up for a while.

Universal’s social media even got in on the game. After the Turkeys came out last year, another Disney owned Twitter handle also lost its mind when Freeform (the channel formerly known as ABC Family) tweeted the following…

Next year brings Mickey and Minnie’s Runaway Railway at DHS, but we did get a taste of the ride back in 2017 at DHS. “Art” that inspired the the attraction was posted in at the Walt Disney Presents gallery. When people looked closer, it turned out that it wasn’t actually printed art, but blown up images that were screen capped from Mickey Mouse cartoons on YouTube. They still had the a “SUBSCRIBE HERE” button in the picture. You can’t makes stuff this up. After some laughs were had, the art was seemingly replaced quickly without the buttons.

At least, that’s what we thought happened.

In April of this year, BlogMickey.com noticed something peculiar. Upon even closer inspection, the SUBSCRIBE HERE buttons were still on the pictures, they were just painted over, and now the paint was coming off.

Here is a pic of the “new and improved” art. Looks like the SUBSCRIBE HERE button is gone right?

Believe it or not, this wasn’t the only time Disney tried to cover up a weird mistake at DHS this year. Over in the bus area, there was a sign that listed out all the places where you could take a Disney bus to, like Disney’s Magic Kingdom, Disney’s Grand Floridian Resort and Disney’s EPCOT. However, you could also take a bus to Disney’s Disney Springs, which sounds – pardon the pun – Goofy. After a while, Disney finally used a piece of tape to cover “Disney’s” on the sign.

Out in Disney California Adventure, they had their own signage issues during the opening of Pixar Pier. On a wait time board, Disney labeled one attraction as the “Pixar Pal-A-Around.” The name is supposed to be “Pixar Pal-A-Round,” and it is the new name for the rebranded Mickey’s Fun Wheel.

Lo and behold, the sign was changed with Disney trying to quickly erase the second “A.” Unfortunately it just made the sign look weird. They also took the “Jessie’s Critter Carousel” attraction off the board, possibly because the ride was not even scheduled to open in 2018.

The next step? Well, just take the Pal-A-Round off the board and put Jessie’s Critter Country back on of course. DUH.

# 2 – That Time Disney Had ANOTHER Typo On a Sign

Speaking of signage issues AND annual events, back in February Disney had another amazing typo on a road sign. This time it was for Disney’s AMIMAL Kingdom.

As you may remember, last year there was a wonderful road sign for “Epoct.”

The 2018 class for the Disney Signage Hall of Fame is one of the strongest in recent memory. Let’s take a look at some previous inductees, starting with the “Wax Been Done” sign at the Poly.

Even our beloved Disney Outlet Store had one for the all time books.

# 1 – That Time the Maleficent Dragon Float Breathed Fire FOR REAL

The Festival of Fantasy parade at Magic Kingdom is our favorite parade at any Disney park. It has a wonderful soundtrack with fun variations on classic Disney songs. It has some tremendous floats, done with the conceit that they were all built by the residents of Fantasyland. And there are a TON of characters. But the true highlight of the parade is the insanely great Maleficent dragon float.  The dragon has an awesome steampunk look to it, which is cool enough, but the fact that the dragon breathed fire throughout the parade just put it over the top.

Unfortunately, as the saying goes, when you play with fire you’re going to get burnt. On May 11th, that’s exactly what happened when the Maleficent dragon caught itself on fire. Its quite the visual to see something as cool as the Maleficent float moving around with its entire head going up in flames. Instead of running away, the entire crowd couldn’t stop watching, with many of them taking pictures and filming the disastrous event. Because all the good Florida theme park bloggers had the day off, every single photo and video of this once-in-a-lifetime moment was captured in PORTRAIT MODE.  So while the dragon on fire wins the cherished Golden Turkey Award, every single guest watching the parade that day is awarded the even rarer Platinum Turkey Award for their ineptitude and sheer ignorance of the basic rules for theme park photography.

Now I could never be sure, but I thought that I heard the sound of “Taps” being played, gently. – Ralphie Parker, A Christmas Story

There may be only 3 days in the entire year in which EPCOT doesn’t have a festival running, but that’s actually fine with us because the Festival of the Arts has quickly become one of the best things in all of Walt Disney World. This year something odd happened though. In one area, Disney had posted several framed pictures featuring attraction art of various Skyway attractions. There was a poster done in the old timey style featuring the Skyway out in Disneyland, and there was also one featuring the Skyway we had in Walt Disney World. Sandwiched in between the two was a piece of art featuring the Disney Skyliner that is making its debut in 2019.

The very next day after the Skyliner poster made its debut, it mysteriously disappeared. It did not return. That’s it for this year’s Turkey of the Year Awards. A big round of applause for our nominees. Somehow there was still some next level insane stuff that happened which we will cover next month in our look back at Reasons We Can’t Forget 2018 (No Matter How Hard We Try!) So stay tuned for the Curious Case of the Missing Letters at Universal, Toothsome being shut down for cockroaches, and an audio-animatronic from the Hall of Presidents used in a way you’ve never seen before.

So there you have it: The 2018 Theme Park Turkeys of the Year! See you next weekend for the latest installment of the SATURDAY SIX, where we’ll look at something fun from the world of Disney and Universal. If you enjoyed yourself, be sure to check out The Magic, The Memories, and Merch! articles, or, for your listening pleasure, check out the E-Ticket Report podcast. You can also follow Your Humble Author on Twitter (@derekburgan).

Is that a murderer’s row of blogging greatness or what?

Special Thanks to The Elite Brandon Glover, Disney blogging’s MVP @blog_mickey, “more for me” @Hastin, the bio-est of all reconstructs @bioreconstruct, Mr. ‘Ohana Tim Grassey, the SAT SIX Fun Squad of Parkscope Joe and Nick, and Hermione Granger’s tutor Megan Stump for their invaluable assistance with this article. The SAT SIX is inspired each week by goofballs Aengus Mackenzie and LitemAndHyde and you Potterheads will  enjoy Meg’s other blog work over at the Central Florida Slug Club.

4 thoughts on “SATURDAY SIX: The Fifth Annual Theme Park TURKEYS OF THE YEAR”