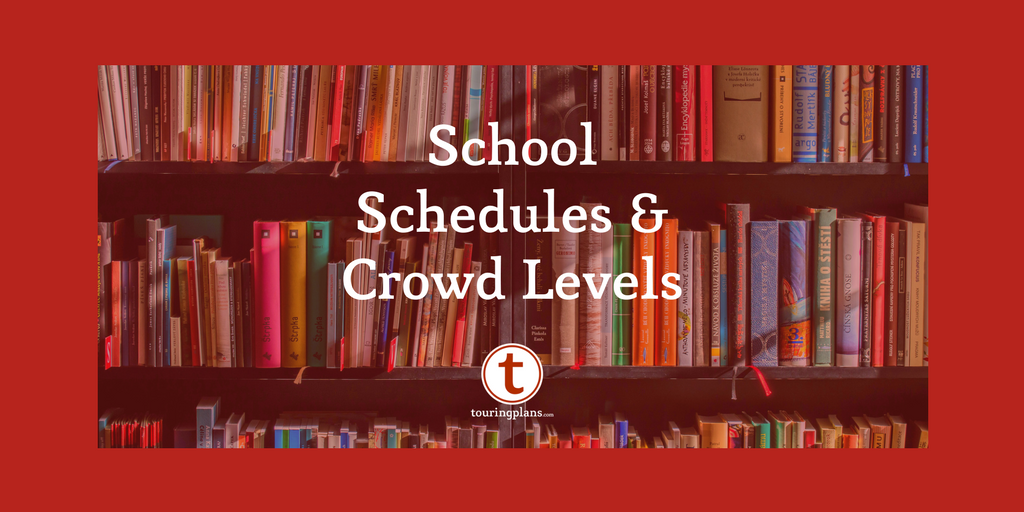 Ed. Note: We frequently get questions to TouringPlans asking how we make crowd predictions. This article provides insight into one of the metrics used when formulating predictions about park attendance.

The first thing to realize about school schedules is that not all school districts follow the same vacation schedule. Even some school districts have different schedules within the district. This is a good thing– even if you are bound to traveling based on your school’s schedule, you can find a time where other schools are in session. Another thing to realize is that there is variation from year to year. The day of the week or week that a holiday falls in can dictate what days a school district will take off. School schedules have geographical norms. The peak of spring break crowds at Disneyland may be different than at Walt Disney World. For example, school schedules in Southern California are going to have little impact on Walt Disney World, but a huge impact on Disneyland crowds.

In this blog post, I have a lot of maps. I am using pie charts in the geographical location of the school districts. For school districts that are within 100 miles of each other, all the schools for all those districts will be lumped into one pie chart. The size of the pie charts is based on the enrollment of all the schools that make up the pie chart. The maroon area is the proportion of students in school for the week, and the gold area is the proportion of students on vacation. A week runs Monday through Friday. A school will contribute to both the maroon and gold area if a school is not on vacation for all five days. If a holiday falls within the week or the weekend before or after the week, it will be listed in the map’s title. The “On Vacation” in the title is an overall proportion of the 12 million students that are on vacation for the week.

We do have data for Alaska, Hawaii, and Puerto Rico. For simplicity, the data is not included on the maps.

I may show multiple years. This is so you can see the change from year to year.

Some schools start as early as August 1st. Other schools do not start until after Labor Day. If your school starts late, going on vacation at the end of your summer will mean you will have lower crowds.

A trend in school schedules is to include a fall break. Some schools take a full week, whereas others take a few days. Fall breaks will be halfway between the start of school and Thanksgiving. For most schools, this will be sometime in October. For schools that start early, fall break can start as early as the second week in September. MLK Day is observed by all school districts. Very few schools take the whole week off since school just started after New Year’s. Presidents’ Day is always the third Monday in February. Mardi Gras is 47 days before Easter, and Easter can vary greatly. Mardi Gras can fall anywhere between February 3 and March 9. All schools get off for Presidents’ Day. Some schools take the entire week of Presidents’ Day off. These are mostly schools in the Northeast. Mardi Gras is most famous in Louisiana, but it is also celebrated in Texas, Alabama, and Florida. On their own, both Presidents’ Day and Mardi Gras brings people to Walt Disney World. When these two holidays occur in the same week, Disney will be very crowded. End of the School Year The TouringPlans models take in all the school schedule data including their location to build the Disneyland, Walt Disney World, and Universal Orlando Crowd Calendars. It would be impractical for us to track the 14,000 school districts in the United States. The sample of school districts that we track is a good representation of all the school districts. If your school district does not follow the general trend, you can take advantage of its quirks and visit the parks while other schools are in session.

Have any additional questions about the Crowd Calendar or how we crunch the numbers for you? Let us know in the comments.