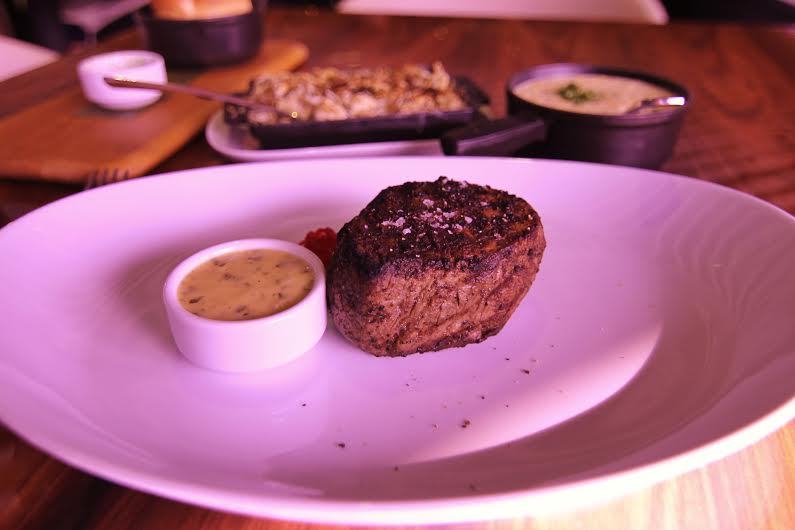 As we’ve highlighted the past few weeks, Disney Springs is really stepping up its dining game with a ton of new restaurants. Today, I take a look at a meal I recently enjoyed at one of the new higher-end offerings, STK Orlando, located in The Landing just across from Paradiso 37. STK is a popular modern take on the classic steakhouse with locations in big cities like Miami, LA, NYC, and Chicago; it definitely trends towards a younger crowd with a DJ located on the main floor of each of the restaurants (and Disney Springs’ location is no different). I was interested to see how this restaurant would fit with Disney’s typical family clientele, so I picked an early dinner reservation slot for my meal; the restaurant also serves lunch with a few sandwiches added to the salad, steak, and side dish staples. I was seated immediately upon arrival in the bar area of a nearly empty restaurant (save for a lot of furniture – you will definitely get to know the table next to you here, given how closely you sit next to them). My initial impression was that the ambiance was pretty low-key – the music wasn’t loud, but the place also just wasn’t busy yet. All in good time…

After a few greetings by several servers and wait staff, my server arrived and gave me a quick introduction to the food and cocktail menus (though oddly, he skipped over the steak section, which I expect is why most people would stop here). Several salads and hot appetizers are on offer to start your meal off, followed by a large selection of steak cuts as well as local seafood and other meat entrees. I was also informed that they were a “full order kitchen”, so I would need to order everything all at once, and he would pace it out for me. I wasn’t too surprised by this – many upscale restaurants prefer guests order like this to keep everything timed out just right for the kitchen – but it was the first time I’d had it flat-out explained to me, which is probably a good thing for most guests not used to restaurants like this. I started the night off with the Green Intensity cocktail ($14), one of their more unique offerings in a short, sweet-leaning, pretty standard craft cocktail menu. This drink is pure shtick – the subtlety of Absolut Elyx (a copper-distilled, high quality version of the Absolut vodka you’re probably used to) is completely drowned out by whole jalapeno slices and tons of seeds, a bit of basil for some earthiness, and lime to cut a little of the spice. This is legitimately spicy stuff, which may scare you in cocktail form, but it’s refreshing and definitely wakes you up. I give them credit for creating something a bit off the beaten path, but next time, I’ll stick to the Elyx served straight-up. My first appetizer to arrive was the burrata salad, comprised of local heirloom tomato quarters, arugula pesto, and crispy serrano ham ($16). The burrata cheese atop the salad was perfectly creamy, its mild mozzarella flavor working well with all the classic notes of a caprese salad. The arugula pesto was heavy on the pine nuts, earthy, and benefited greatly from the briny whole olives scattered throughout and flecks of sea salt dashed on the fresh tomatoes. Though this is a pretty safe option for a salad, it’s a large portion and easily shareable with even the pickiest of eaters. Alongside my salad, I was able to sample the house pull-apart bread – buttery, fluffy rolls baked together and drowned in an addictive garlicky, blue cheese butter, with herb olive oil for dipping on the side. Truthfully, I could’ve called it a day with this bread, it was that good – just as decadent as you’d expect at a steakhouse.

Next, I sampled another (less spicy) cocktail off their menu, the Cucumber Stiletto ($14), made with Ketel One Citroen, St. Germain elderflower liqueur, muddled cucumber, and mint. This drink is a sweeter variation of the Cucumber Cooler you’ll find across the way at BOATHOUSE (and is becoming very popular on drink menus nearly everywhere now), but would certainly not drown out any accompanying food and is an apt choice for most light cocktail drinkers. The visible lime zest in the glass was a nice touch, and though this wasn’t a strong pour in the least, I would order it again on a return visit. I don’t know that I can say the same for the second appetizer I tried, the seared scallops with spring onions, short rib marmalade, and preserved lemon ($18). In contrast to the burrata salad, this was a tiny portion, with two well-seared scallops sitting on a bed of woefully overcooked (and slightly bitter) green onions and a dollop of sweet pulled beef. This dish was a little confusing to me – the scallops were good by themselves, but desperately in need of a splash of acid from fresh lemon (the preserved lemon was nowhere to be found), given the overwhelming cooked onion flavor and greasiness of the plate. I almost wished the green onions had been left fresh, to offer a bit of brightness to the dish, as it leaned overall a bit heavy and unbalanced.

While I was waiting for my main dish to arrive, the restaurant’s sommelier came over to greet my table (and others, as they started filling within the bar area). He asked what steak I’d ordered (and what accompanying sauce, as you can pick one of several great choices), then suggested both a red and a white wine that would pair well with my selections. Though totally unprompted, his exceptional service thoroughly sealed the deal for me on a glass of wine I hadn’t planned to order for my meal. I’d say he’s just an excellent salesman, but it really impressed me that he had the foresight to offer a white wine selection (a rarity in many classic steakhouses, but this one seems to know their modern-leaning audience). Overall, the wine list isn’t huge here for by-the-glass selections (they definitely want you to order whole bottles), and not all that different from what you’ll find at most other restaurants around Walt Disney World, but most patrons will find something to fit the bill. Shortly after my appetizer plates were cleared, my steak and sides arrived (though it took a few more minutes to acquire silverware). STK demarcates steaks by portion size on their menu, a smart choice for the restaurant but trickier for budget-conscious diners – everything’s arranged by size and cut, not price, so be sure to pay attention there. I ultimately settled on what’s sure to be one of the more popular selections here, the 10oz filet ($46), no toppings this time (though the foie gras butter was very tempting), and a side of the béarnaise sauce. The filet itself had a perfect crust with salt and savory herbs, and was just medium rare inside. It sliced like butter (once I finally had silverware!), and the lemony and creamy, well-made béarnaise complimented each bite I took. It’s easy to balk at the prices for steakhouses nowadays, but after a few bites, I had zero qualms with the value for this particular dish, unlike the sides. Both the sweet corn pudding and cauliflower gratin came highly recommended from my server, so I splurged for both ($10 each), though he did advise me that one side was “plenty for two people”. When they arrived at the table, I had to let out a slight chuckle at the size – each side was no more than 5-10 bites a piece. The cauliflower gratin had a slightly bitter, herbaceous almond breadcrumb crust on top (bitter due to the burnt almonds, no doubt), with a thin, creamy sauce and fork-tender cauliflower overtaken by the topping’s flavor. This was a fine vegetable side, but I’d stick with the corn pudding instead – perfectly seasoned to bring out the natural sweetness of the corn, this creamed corn variation was rich and well done. Every steakhouse prides itself on decadent and over-the-top desserts, so I was interested to try one such dish here to cap off my meal. Several desserts stood out to me (the orange dream cheesecake and warm baked cookie, especially), but I settled on the bag o’donuts, filled with dulce de leche and served alongside spiced chocolate and raspberry sauces. The donuts came in a paper bag, and were pretty well-coated in cinnamon sugar, but sadly, much of the dulce de leche filling had oozed out of the donuts and in to the bottom of the bag because they chose to serve them with the pretty, unpunctured side up. The chocolate sauce didn’t have much spice to it, but both sauces complimented the slightly bread-y and savory donuts to bring out the sweetness of what filling remained. Overall, this was a fine dessert, but compared to similar dishes at California Grill and Artist Point, I’d probably opt for something else here (or wander over to Amorette’s Patisserie in Disney Springs’ Town Center instead).

Overall, STK has its ups and downs. As mentioned earlier, tables are very close together, and as the restaurant filled up, it became a bit cramped for servers to even get between tables to deliver food. The music eventually crescendo’d to a point where my server had to lean down to hear my dessert order; neighboring tables also had the same problem, especially those with kids. Upstairs seemed a little quieter than downstairs (where the DJ sits), but it’s definitely still a bustling atmosphere. My server had a few stumbles here and there, but he was very nice and all of the rest of the wait staff were incredibly attentive; ultimately, my meal was paced fairly well – it took a little over an hour and a half for four courses.

The food was largely very tasty, in particular (as expected) the steak, though the portions may be a bit surprising – for a table for two, if you have an appetizer and a medium-sized steak each, one side split for two people might be enough; with a smaller steak (or one of the large steaks split), no appetizer, or both, you’d probably still be hungry when the food disappeared. I actually preferred my steak at STK to any steak I’ve had at BOATHOUSE or Yachtsman Steakhouse, and it’s probably tied with Shula’s Steak House for one of the best steaks in Walt Disney World.

As for sides, I think BOATHOUSE and Yachtsman still have the leg up: both have excellent mac and cheese and veggie sides, with much larger portions for similar prices. STK is slightly more expensive than other similar restaurants (and currently offers no discounts, and is not on the Disney Dining Plan), but given the quality of the steak, that shouldn’t be a major deterrent. If Yachtsman or Shula’s are too stuffy an atmosphere for you (which they can be, especially for families, with white tablecloths and suffocatingly good service), STK works – exactly the shot in the arm of modernity that has been much needed at Disney Springs.