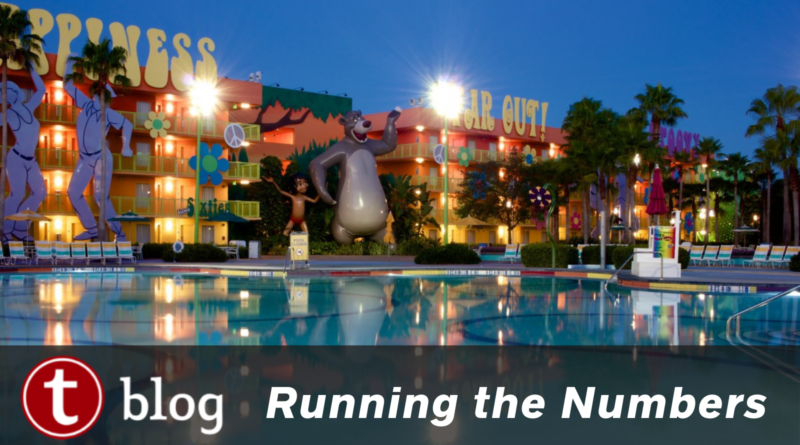 We all have reasons for picking the WDW resorts that we stay at. It could be cost or theme or proximity to a particular park. But no matter where you choose to stay, wouldn’t it be nice to know which building at that resort had the highest overall satisfaction? That way you could submit a room request to increase your chances of being very happy with your room. We recently took a look at the “winners and losers” on property overall. But a reader pointed out that all of the winners were at Deluxe and DVC resorts. It’d be more helpful to know the top building at each resort. That way you have information about which building to request, no matter where you’re staying. So, Melissa, thank you for pointing me in the right direction! Today we’ll look at the “best” buildings at each Value and Moderate resort, followed by Deluxe and DVC resorts later this week.

Easy math today! And if you’ve read any of our resort satisfaction posts, you know the drill. After every WDW stay, you can submit a post-visit survey. And if you submit a room number with that survey, then I can tell which building or section that you stayed in.

For each building (or section), I calculated the overall average satisfaction. Then I compared it to other buildings at the same resort to see which average was highest.

One other note – resort maps in this post are going to be tiny. But if you click on them, they should expand. 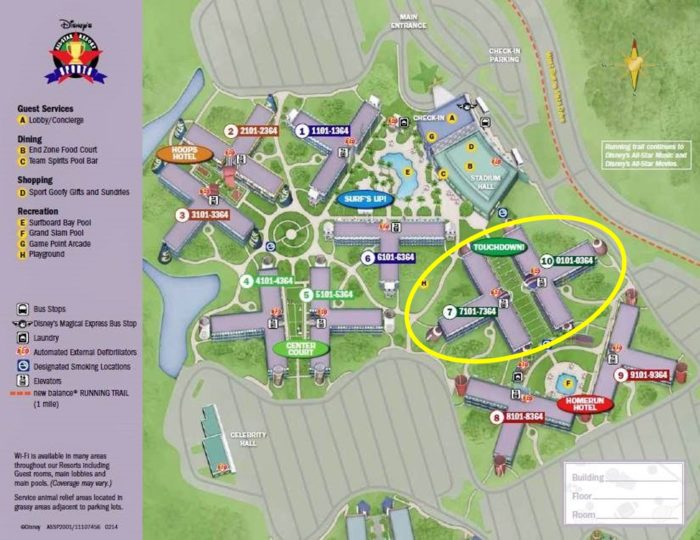 All-Star Sports is an absolutely huge complex. It’s often packed with competitions teams or squads. It’s also regularly the cheapest resort on property at WDW. If you find yourself planning at All-Star Sports, the buildings with the highest satisfaction are in the Touchdown! area. The average rating for Building 10 is a pretty surprising 4.75. The next-highest building at All-Star Sports is Touchdown! Building 7, with an average rating of 4.58. Both are close to the main building and transportation. And there is no loud pool to contend with either. 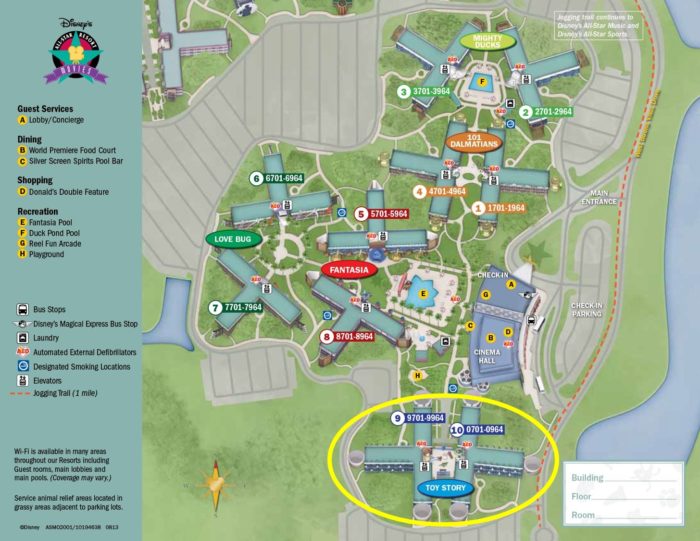 Moving on up (as far as price is concerned) in the world of the All-Stars, we come to All-Star Movies. Another large resort with relatively cheap prices. If I would’ve guessed which area was most popular at this resort based on theme alone before seeing the results, I would have gone with Toy Story. Toy Story always wins, right? In this case, right. But just barely. Toy Story Building 10 has an average satisfaction score of 4.65. But, interestingly, the Love Bug Buildings both score better (4.56 for Building 7 and 4.52 for Building 6) than Toy Story Building 9, at 4.50. Just like with the best building at All-Star Sports, Toy Story is really close to the main building and transportation, and also doesn’t have a big loud pool. 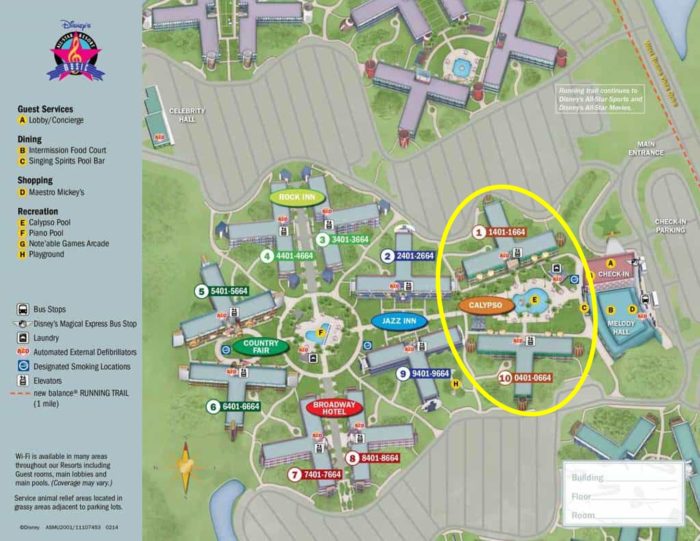 All-Star Music is the first resort that I distinctly remember visiting as a kid. I remember thinking that the Calypso pool was the coolest thing ever … and that’s about it. Maybe everyone that stays there feels the same way, because the Calypso section has the highest satisfaction ratings at the resort, with Building 1 averaging 4.68. Music is also the All-Star resort with the most tunnel-of-doom-like design. Unless you’re staying in Calypso, you have a really long walk to wherever you’re staying. It’s not surprising that the next-closest section, Jazz Inn, has the next-highest satisfaction with Building 2 clocking in at 4.51. 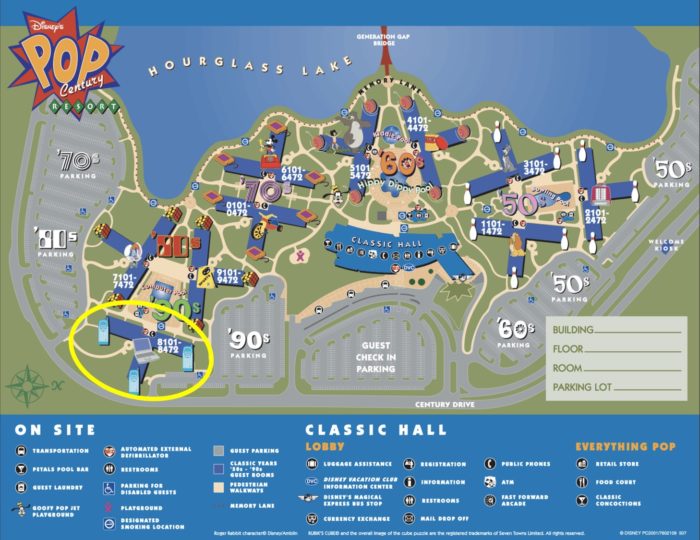 We’ve discovered that Pop Century is a place that gets a lot of repeat visitors. It’s nicer than the All-Stars, and less expensive than Art of Animation. And now it has access to the Skyliner too. So which area gets the highest satisfaction ratings? The spread here is much lower than any of the other value resorts. The area with the lowest average is only 0.14 points lower than the area with the highest average. So you’re probably going to be okay no matter where you stay. But the winner here was surprising to me – the 1990s bests the competition with an average satisfaction of 4.61. It’s a hike from these rooms to the main building or to the Skyliner. But you can actually get decent access to buses if you’re willing to trek across a parking lot. 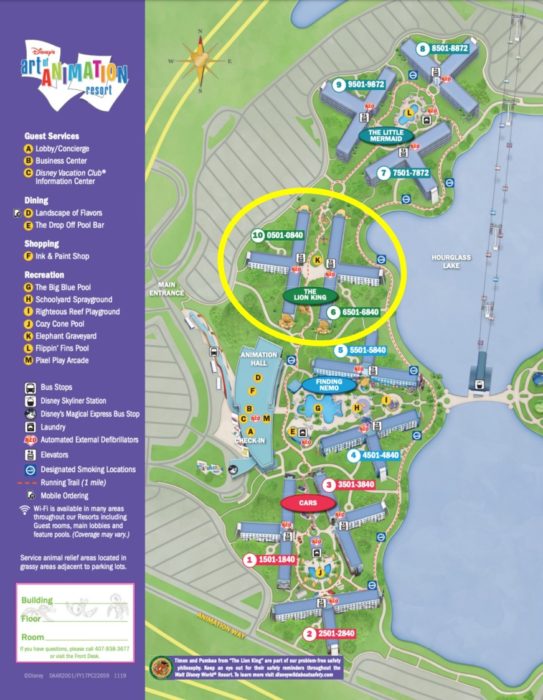 Now we’re to our most expensive “value” resort. Art of Animation is a tale of two resorts – with the standard rooms and then the family suites. Unsurprisingly, the Little Mermaid area with its standard rooms has the lowest satisfaction at the resort. The three areas of family suites each have very similar satisfaction scores – all within 0.10 points of each other. But the winner turns out to be the Lion King buildings. Building 6 averages 4.74, with Building 10 right behind at 4.73. These rooms have a quick walk to the main building, and aren’t too far from the Skyliner. It’s also the only section that doesn’t have all of the noise associated with a pool in the middle. If you are looking for a Little Mermaid room, aim for Building 7. It has better scores than the other two buildings in that section. 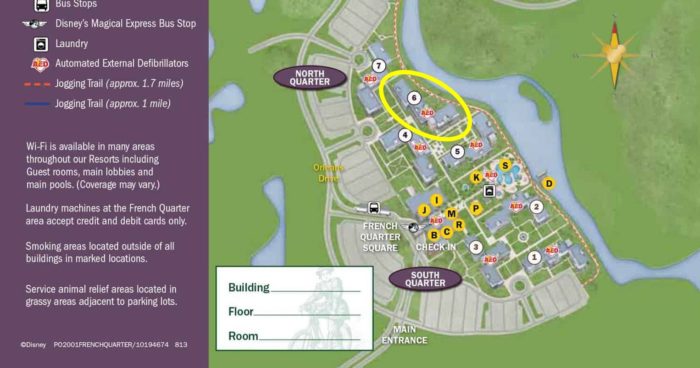 In general, POFQ is a resort with really high satisfaction. In fact, 4 out of the 7 buildings here have a satisfaction score of 4.81 or higher. The one building that pulls ahead of the pack is Building 6, with an overall satisfaction score of 4.85. In fact, this is the fifth-best building across all of WDW property – it just barely missed our list of the top 4. French Quarter is a pretty small resort, so walking distances aren’t going to be a big deal. And Building 6 has the highest number of calm river views. Perfect for a relaxing evening after a day in the parks. 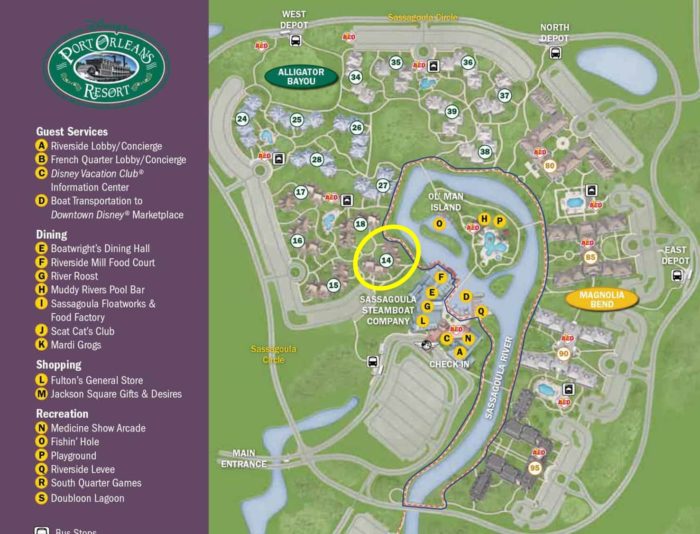 Compared to POFQ’s seven buildings, its sister resort has 20. Yikes. The buildings at Riverside all vary widely in walk times, themes, and size. But there was one clear stand-out among all of the buildings. Building 14 is in Alligator Bayou, and averages a satisfaction score of 4.75. It’s located right next to the main building and is a very quick walk to transportation. But it only has 64 rooms, so your chances of landing there are pretty slim. If you want to increase your odds of something satisfactory, the next-highest building was a tie between Parterre Place (which is all Royal Rooms) and Building 27, both of which average 4.62 in satisfaction. 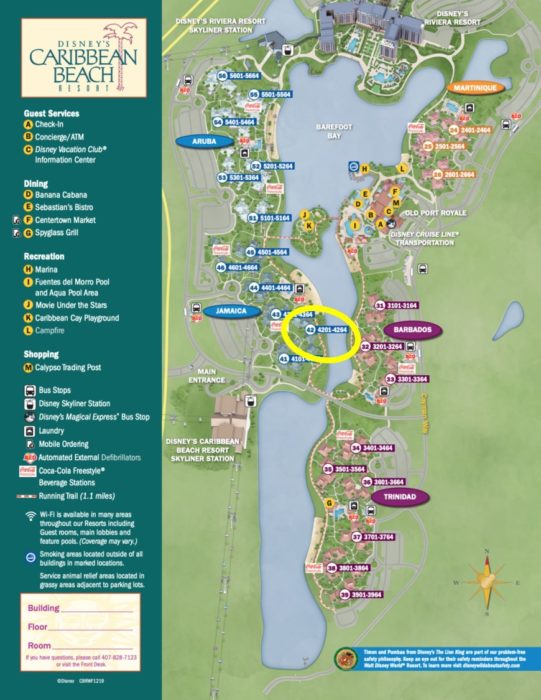 Caribbean Beach regularly scores the lowest out of any of the moderate resorts. And the building-by-building results are just … all over the place. No one section is particularly better-rated than others, but Aruba buildings other than Building 51 reliably score lower than other areas (even post-Skyliner-opening). The one building that is rated higher than others is Jamaica Building 43, with an average rating of 4.67. It does have quick access to a pool and to the Skyliner station. So there’s that. Following close behind is Barbados Building 31, with its average rating of 4.66. 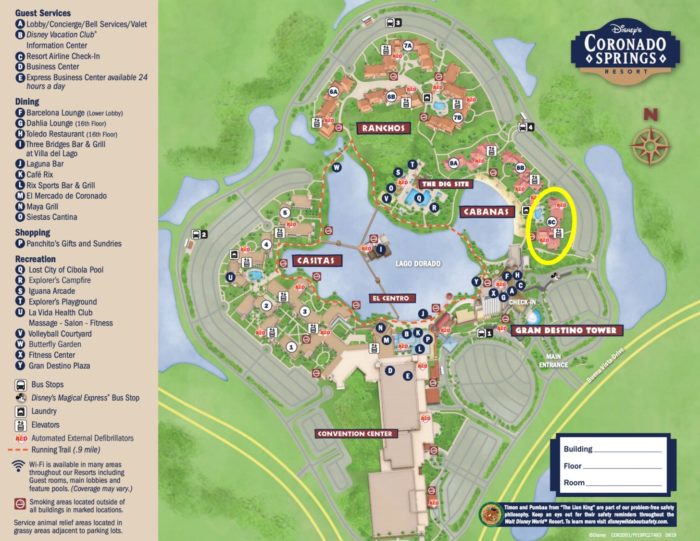 Coronado Springs is another sprawling resort with many buildings to choose from. And the average satisfaction scores for each building exhibit some of the widest ranges of any resort. The difference between the top and bottom building is 0.71. I’ll admit, I immediately assumed that Gran Destino Tower was going to have the highest satisfaction here. It’s shiny and new. But the real winner is Cabanas 8C, with average satisfaction at a whopping 4.81. That enough to land it in the top 10 of all buildings on WDW property. It’s a really quick walk to the lobby and transportation, and it basically has its own quiet pool.

The Cabins at Fort Wilderness 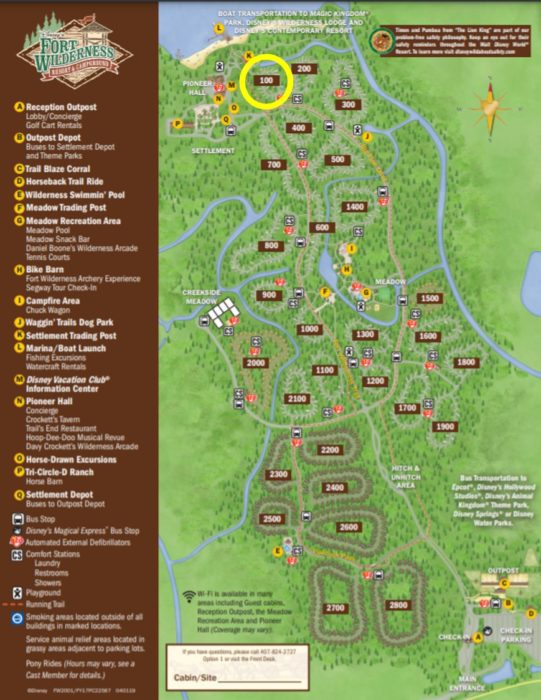 The Cabins are considered a moderate resort, but are definitely different (and priced higher) than all of the other moderate resorts. Each cabin is a 1-bedroom suite. Once again we have a very clear best section of the resort, and that is the 100 Loop, with an average satisfaction of 4.90. Unfortunately, there are only two cabins on that loop – it didn’t make our list of top 4 buildings overall solely because we have very few reviews from those two cabins (6 reviews from Cabin 118 and 4 reviews from Cabin 120). Both cabins have a 1-2 minute walk to Pioneer Hall and transportation. Their location is ideal. If you can’t get lucky enough to land in the 100 loop, try for the next-best sections, the 2500, 2700 and 2300 loops.

Did your favorite building make the list? Like me, were you surprised by any of the results? Do you have any predictions for what we might see at Deluxe and DVC resorts? Let us know in the comments!