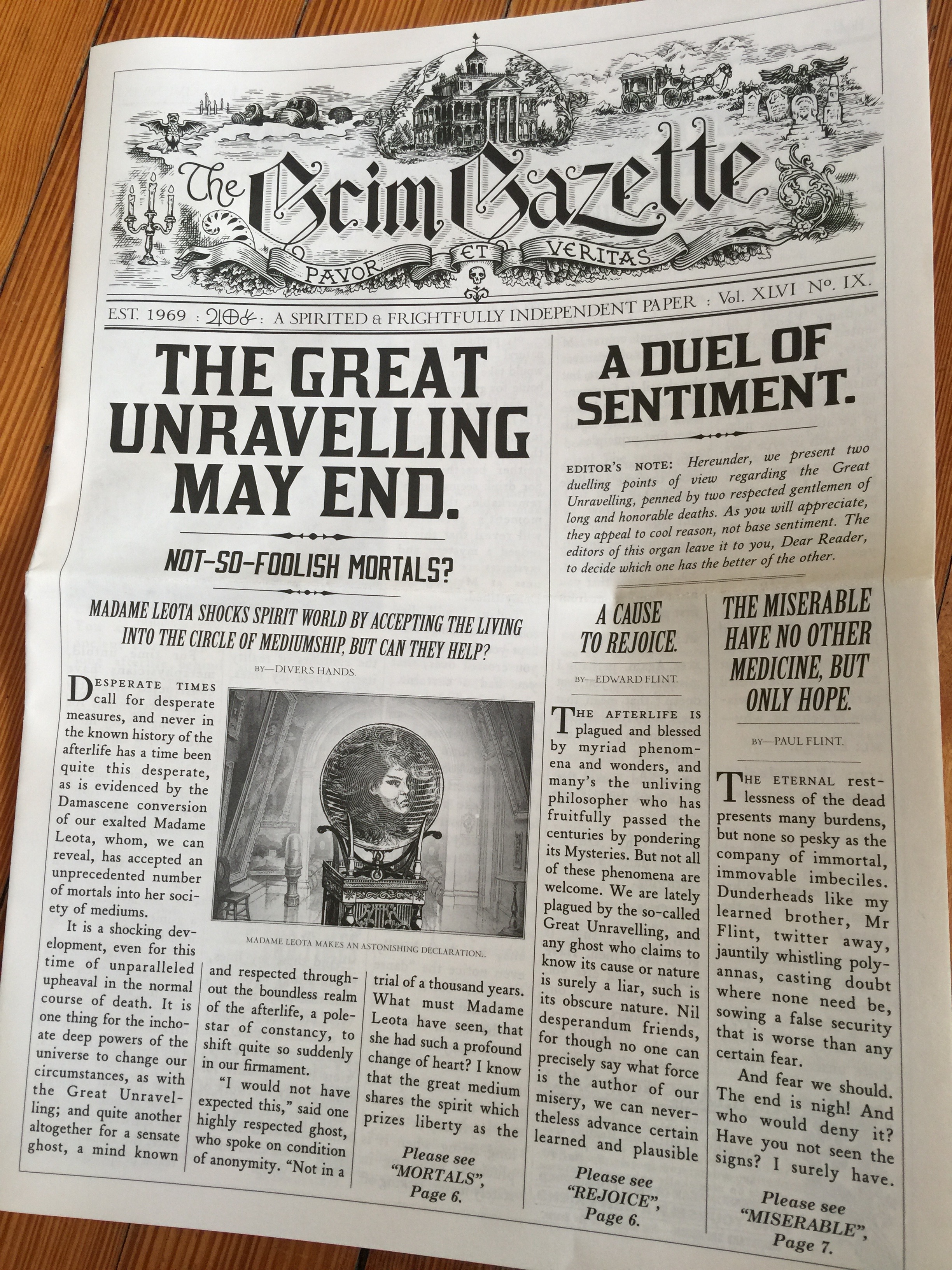 Foolish mortals who are regular Touring Plans blog readers may remember that about a month ago I reported on a new subscription box service themed to Disney’s Haunted Mansion attraction, The Ghost Post. The second of the three-box series arrived this week. Box #2 arrived in similar packaging to the first box. The only real differences were in the box side panels. The “Final Arrangements” notice (on an inside flap) was different; one was marked by M.T. Graves and one by I.M. Mortal. I get the puns, but I have not yet found any relationship of these markings to the Ghost Post game. Additionally, the back side of the cartons had different drawings, clearly elements of a house. I’d be shocked if Box #3 didn’t have the roof on the house on it. Here’s the scene opening the box. While some of the pieces were entirely new, there was quite a bit of similarity to the previous box, starting with the instruction to dampen the paper of the introductory welcome letter. On one hand it was comforting that I already knew what to do to “solve” this puzzle, but on the other hand it would have been nice to see Disney do a new trick. The text of the revealed message read: “You are indeed a talented individual. Even Madam Leota declares it! And this discovery of your powers couldn’t come too soon. To understand what will restore our ability to travel, we need measurements from the land of the living. In this box you’ll find tools to make these observations. Perhaps a reflection on the tea leaves will help guide you. You already have a sheet devoured by moths; tear it to strips to make the piano sing. Observe the movements of the dancers as this spins [arrow to tiny drawing of the phenakistoscope]. Note the steps and match to the moth-eaten strips. Doors. Those pesky things, always moving about. [Blueprints] the best and most recent we have. [Divination cards] to further you studies of our travel troubles. The crows are nesting in the eaves – a sure omen of your discoveries to come!”

Following the instructions in order, I turned to the tea leaves. This ended up being the exact same trick used in the first box; use the mirrored edge of the teacup from Box #1 to read an anamorphic drawing. This was cute and surprising the first time, less so when I did it again.

The next item on the hidden message was, “You already have a sheet devoured by moths; tear it to strips to make the piano sing.” This was a reference to a card found in Box #1 which had been described as “moth eaten.” As I had surmised last month, the pattern of dots is indeed used to make music.

It’s a bit challenging to see in the photos, but there were three pre-scored perforations on the card which made for a natural place to separate the ad card into long strips. It took me a second to figure out how to insert the strips into the wooden piano. But after a bit of trial and error, I worked out that there’s a small slot in the piano, just under the bat insignia. Turn the crank and music plays. The sound was tinny, like a child’s toy music box, but charming nonetheless. There are three strips that each be inserted from both sides and either end, meaning that there are 12 possible “songs” (3 top front + 3 top back + 3 bottom front + 3 bottom back). I tried several and it was immediately clear that some insertions resulted in hummable tunes, and some were just random notes. But what to do with this information?

I then remembered the Phantom Radio app that was used in Box #1. Sure enough, that’s what I needed to proceed. As with the first box, I had to use the app to scan each item in the box and input a code of symbols that was printed on the objects. Again, scanning the objects and entering the codes unlocked a series of “stations” on the Phantom Radio app player. The radio stations gave instructions on how to continue solving the mystery. (Still not entirely sure what the mystery is, by the way.)

The app instructions indicated that I should assemble the phenakistoscope and spin it while looking at a mirror through the small slits in the paper wheel. Forgive the lack of visual representation of this. I tried several times to get a clear photo or video and was unsuccessful. Suffice it to say that there was an optical illusion of ghosts dancing around a pipe organ. That was mildly entertaining, but had absolutely nothing to do with moving the story forward.

The app radio then instructed me to look at the back of the scope wheel, the side with the dance pattern footprints on it. The goal was to match footprints with markings on the player piano strips. The footprints turned out to be a selection of some that were visible with the naked eye, and some that were visible only in the dark due to glow-in-the-dark printing. (You can vaguely see the glow-in-the-dark printing on the close-up of the scope wheel above.) The footprint patterns were the key to identifying which orientations of the player piano strips were required to unlock other stations on the Phantom Radio. The verification took place via a Shazam-like component of the app. The app actually “listened” to the tuned you cranked out of the player piano. When played the correct tunes, more information about the game was revealed. This was my favorite part of this box.

The next puzzle in the game involved the card printed with illustrations of doors. Like the moth-eaten advertisement, the card had clear perforation lines. In the card’s original form, there were seven doors shown. When the sections of the card were separated and rearranged, there were eight doors. Oooooh. Ahhhhhh. This felt old timey Mad Magazine to me, but not in a good way. The change in the door count reinforced the idea that there’s a missing room in the Mansion (already alluded to with the teacup puzzle).

Our next task was to find the missing room. The Radio app instructed me to turn to a specific page in the Grim Gazette, and orient that page in a specific direction. The game with the cards involved placing a marker (they suggested a coin, I used a funky blue paperclip) in the foyer and then moving the marker in a specific pattern based on the number of letters in the name of the room, and then eliminating a card or two as “places where the hidden room could not be.” This was repeated several times until only one room remained.

We were not told exactly what goes on in the hidden room or why we needed to find it.

Overall, I enjoyed Box #2, but not as much as Box #1. The player piano, paper strips, and Shazam function of the Phantom Radio app were new and delightful. On the down side, the “dampen the letter” and teacup tricks were repeats. As with the first box, I felt the Tarot card trick was too simple. And the “count the doors” trick seemed like something a 4th grader would find in a book of optical illusions sold in through a Scholastic Reading Club flyer. I found myself wanting more fresh material. Fingers crossed that the June box brings a big bang.

As an aside: Yes, I did bring the Tarot cards from Box #1 with me to Walt Disney World last week. Yes, I was a lame idiot and left them in my hotel room on the day we went to the Magic Kingdom. I’ll try again to use them later this summer.

What did you think? Has the value of this pricey product been maintained? Do you wish you had purchased a subscription, or are you glad you dodged a bullet. If they continue with the premise, what attractions would you like to see highlighted? Let us know in the comments below?