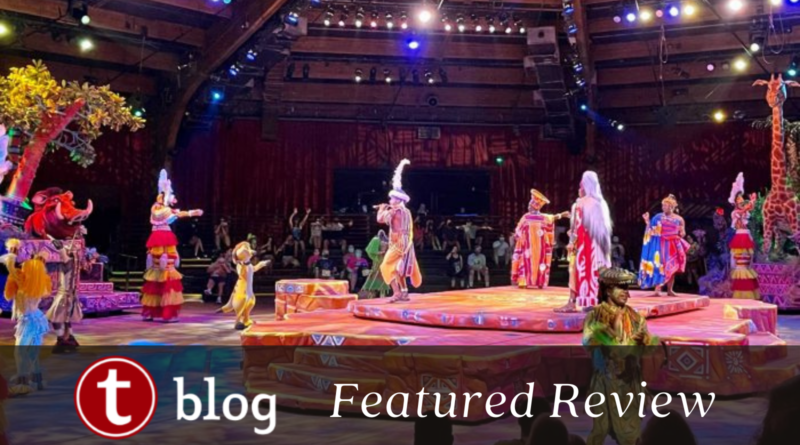 Walt Disney World produces some of the most spirited live entertainment in the entire world. One of the most noteworthy productions to come out of the parks is none other than the newly revamped Celebration of The Festival of The Lion King at Disney’s Animal Kingdom Theme Park.

While some have dubbed this a “Broadway-style” show, I find their comparison a bit ill-stated. Perhaps, the phrase “Broadway-caliber” would be more fitting. In the classical sense, the presentation is far less traditional musical theatre and much more akin to a tented Las Vegas pop-up performance, complete with a show-stopping combination of singing, dancing, acrobatics, and puppetry. Celebration of The Festival of The Lion King exhibits greater pageantry than a standard book report retelling of the 1994 animated film and therefore delivers precisely what the title suggests… a celebration! Though this may not be the treatment theme park goers expect, it is what makes it so refreshing!

As the show begins, we are immediately greeted by four lively narrators dressed in African-inspired garb, each introducing themselves by sharing the meaning of their Swahili names: Kiume (strong and manly), Nakawa (good-looking), Zawadi (the gift), and Kibibi (princess). Throughout the 30-minute showcase, each performer will live up to their name as they seamlessly charm their way into our hearts. Though they proudly present themselves as individual players, they perform as a unit. As the musical glides from one song to the next, it is abundantly clear that these are seasoned performers who are not afraid to feed off the energy of the crowd. 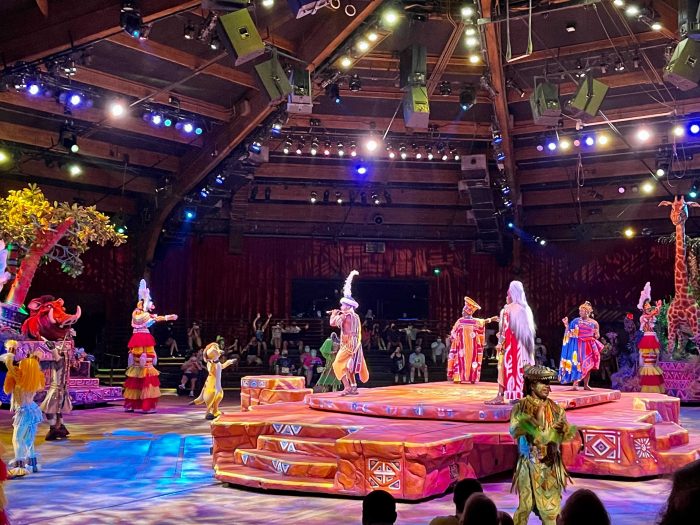 The rest of the cast is comprised of dancers (and one costumed character) donning vibrant dressings inspired by both human and animal characters alike, including lions, elephants, giraffes, birds, zebras, and gazelles. The costuming is reminiscent of the original 1997 Broadway production, designed by director Julie Taymor. However, this production highlights theatrical sequins and feathers over muted tones and found materials. According to several sources, over 100+ costumes make their way onto the stage throughout the short-form musical.

This tribal festival takes its cue from previous Disney parades by employing the use of puppetry and large floats, including a large scale Pumba and the show’s mane of honor, Simba. While these figures do have dialogue (including some self-referential humor from Pumba about being “stuck” on the float), the discourse is trite. However, I guess this is better than getting too deep into the weeds, as their primary duty is to hug the sides of the stage and provide familiar eye-candy as the live performers carry the load. Regardless, they are impressive and necessary, if not to the plot, to the guest’s expectation. Yet, more impressive than these stately structures is “talking Timon”, performed by one very sprightly and able-bodied individual. From 1998 – 2009, this role required well-timed exaggerated gestures and a voiceover track to help facilitate one-liners and dialogue to help aid transitions. However, eleven years into its run, Disney Imagineers included a Timon character who could blink and mouth the words as he spoke and scream-sing, as only Nathan Lane can do! This was (and still is) a welcomed improvement to the production, furthering the beloved meercat’s ability to express his high energy frantic antics! 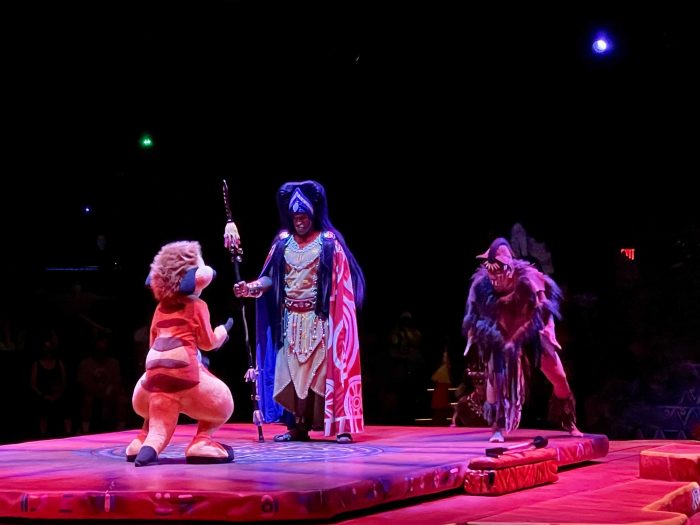 Kiume takes center stage for an impressive rendition of Be Prepared. Though his presence is intimidating (bringing forth lightning inside the enclosed indoor arena, no less) the script does little to explain that he is not Scar, but simply temporarily embodying the infamous villain for this brief vocalization. And frankly, we don’t need the explanation. Due to a quick one-liner by Simba about this “festival” being a “celebration” and the enthralling performances we’ve witnessed to this point; we have already fully bought into the concept. Halfway into the song, a musical interlude takes over as a flame dancer hits the stage. As he performs feats of daring, stilt walkers show off their one-legged dance skills, both of which are equally impressive. Nothing about what either one of these eclectic showmen are doing is easy, especially when you factor in that these performances are repeated seven times a day! 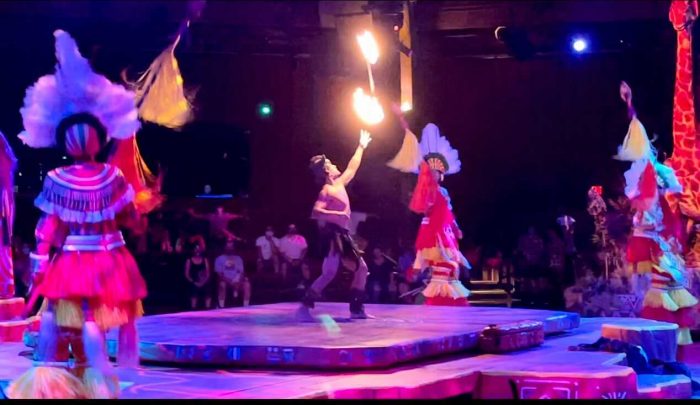 What strikes me most sophisticated about this vehicle is its ability to effortlessly ebb and flow from one number to the next. The never ceasing score helps transition us from one talented tour de force to the next, including a beautiful duet of Can You Feel the Love Tonight, sung by Nakawa and Kibibi, and accompanied by a moving pas de deux. Both dancers are dressed in bird-inspired fashion and their elegant movement feels more like flying than dancing. If there is a hopeless romantic moment to be found in this piece, this is most certainly it.

Finally, the full cast re-enters the stage from all angles for the grand finale (Circle of Life) followed by a very ‘on the nose’ rendition of The Lion Sleeps Tonight. In traditional theme park fashion, we are encouraged to clap and sing along… and we gladly do! 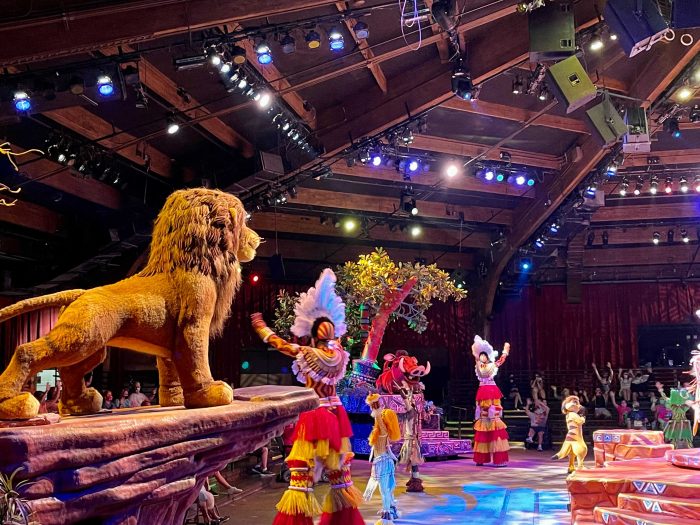 Walt Disney World does not supply guests with a program, citing the talented stage directors, choreographers, and designers that helped bring the show to life. So, allow us this opportunity to say that whoever was a part of this creative team put together a clear and concise vision. How easy it would have been to simply give just the highlights of The Lion King. Rather, we walk away with an epic variety show that leaves us feeling uplifted.

You must remember that their challenge is not a small one. They have to entertain the masses, all of which have been on their feet all day, under the hot Florida sun. Keeping the energy alive in a massive auditorium full of seated patrons takes a lot of skill, with a keen eye on pacing.

Honorable mention to the sound design, as the music and vocalists remain lively, without becoming over-powering. And unlike a few audio-animatronics found through the parks (I’m looking at you, Jack Sparrow) I never had to struggle to hear any witty repartee. 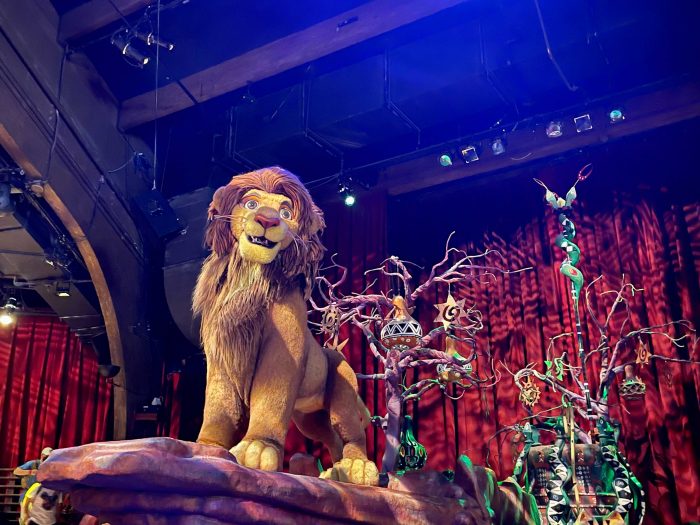 The lighting design is equally impressive, though I do wish the theatre would allow for a bit more dramatics. My assumption is that they are not permitted to employ the use of a hard blackout to further emphasize dramatic beats due to safety concerns. Fair enough.

All in all, I was delighted to hear what new life these performers breathe into these classic showtunes by Elton John and Tim Rice. Moreover, the theatre-in-the-round approach allows you to truly become immersed.

It is funny to review this production, as if it were a new piece of theatre. Meanwhile, it currently holds the title for being the longest running show at Disney’s Animal Kingdom Theme Park. Here is to another twenty-three years in the jungle!

3 thoughts on “Theatrical Review: Does Celebration of The Festival of The Lion King Still Hold Up?”