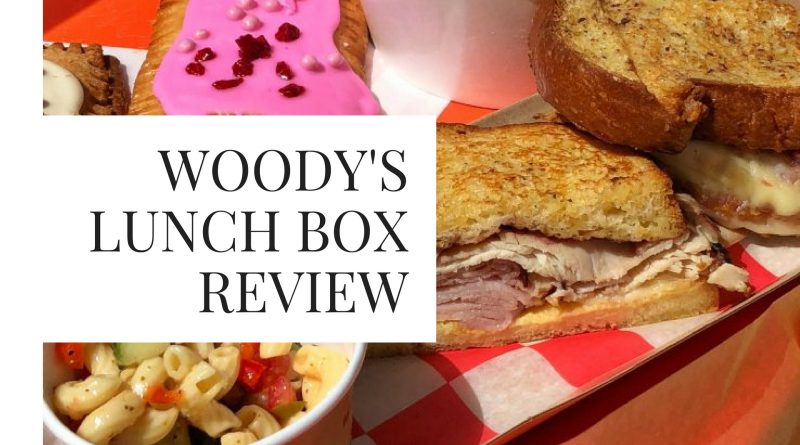 This past weekend, the much-anticipated Toy Story Land opened to huge crowds and much fanfare at Disney’s Hollywood Studios. Alongside Slinky Dog Dash and Alien Swirling Saucers, the land features a new quick service location to satisfy your hunger throughout the day: Woody’s Lunch Box. I dropped in on opening day for lunch to try out a few of your soon-to-be new favorite dishes, to see how they measure up.

First of all, let’s talk a little about the restaurant itself. It’s located centrally in the land, on the left-hand side as you walk from the entrance, just past Toy Story Mania. It is an outdoor quick service location, so much like Min & Bill’s Dockside Diner, you’ll queue up outside to order, pick up your food from the windows, and then find a seat at one of the neighboring tables (some featuring much-needed shade from umbrellas). On opening day, seating was obviously at a premium, so I didn’t get to rest on one of the oversized Babybel cheese chairs (a sponsor of the restaurant), but hopefully you have more luck on your visit. Woody’s Lunch Box, like most quick service locations across Walt Disney World, features mobile order functionality through the My Disney Experience app (check out my review of the mobile order process if you are new to it – it’s super fast and easy!). On opening day, mobile order was experiencing a few issues, so it only worked intermittently, but going forward it will be up and running every day, all day. I highly recommend taking advantage of this to make your order if you do not need to request any special foods because of dietary concerns – it saves so much time! When I arrived at the restaurant, I was quoted a two hour wait in line to order, but with mobile order, I had my order placed in less than two minutes, and in hand about eight minutes later – ten minutes start to finish definitely beats two hours.

The theme of the restaurant is pretty self-explanatory based on its name – it’s actually Woody’s Lunch Box! There are a few neat touches like the thermos serving as a pillar on one side of the lunch box lid awning, and the old school designs you might miss if you don’t get a chance to walk around the ordering area. My personal favorite detail was the Green Army person doing a bit of heavy lifting, in the form of a Babybel cheese, which you’ll find just near the mobile order pickup windows on the right side of the restaurant’s order area.

But how was the food, you ask? In two words: surprisingly great. Disney’s Hollywood Studios is, to me, the weakest of all of the Walt Disney World parks when it comes to quick service food, so while the menu looked great I was worried it wouldn’t meet the high bar that places like Satu’li Canteen have set recently. It did, and so much more. The lunch/dinner menu is “just sandwiches”, but everything, even on a very busy day, was made with care, high quality, and most importantly, it just plain tasted good. It even looked like the pictures of the food on the menu – that never happens! To start, I ordered what is sure to be my new go-to “I need a simple meal fast” sandwich – the Monte Cristo ($11.49), which features smoked turkey, ham, raspberry jam, Dijon mustard, and Swiss cheese. Unlike the Monte Cristos you’d find at Disneyland, this version is baked, not deep-fried, which initially threw me for a loop, but actually turned out to be delicious and much lighter – perfect for a lunch that won’t weigh you down. The best description I can give for the bread is that it tastes like savory French toast- it has the same eggy quality, but without the cinnamon and sweetness. The only improvement would have been another smear or Dijon and raspberry jam, as parts of the sandwich just tasted like a simple club sandwich, but overall this was a winner.

Alongside the Monte Cristo I tried the macaroni salad, one of three side dishes available with every sandwich (tomato-basil soup and “potato barrels” aka tater tots are the others). I really enjoyed this small side – a light vinegar-y dressing tops pasta spirals mixed with a decent variety of veggies including red and green peppers, green olives, cucumbers, and tomatoes. Because it’s not doused in mayonnaise, I didn’t mind that it wasn’t super cold in temperature, and the veggies all still had a nice crunch to them, surprisingly fresh and refreshing. Up next, I tried the BBQ Brisket Melt, which features a huge portion of sliced brisket topped with pickles, BBQ sauce, cheddar and Monterey Jack cheeses ($12.99), with a side of the tomato-basil soup “dipper” cup. Holy moly, this is the new best quick service meal at Disney’s Hollywood Studios. It is heavy, to be sure, but the brisket was surprisingly moist (I always fear sawdust-dry BBQ in parks), with plenty of pickles and cheese to round out the rich and smoky barbecue flavors. I wished, again, for a bit more sauce (and next time I’ll ask for more on the side), but that is genuinely my only criticism of this meal. Perfectly crisp grilled bread rounds out the sandwich, which held up in the heat and humidity, and was even tasty dipped into the herbaceous, creamy, smooth tomato-basil soup, (which I cannot wait to try alongside the three cheese grilled cheese).

The final entrée I sampled, and couldn’t get enough of, was the Totchos ($8.99). Just trust me here – you want these. Crispy tater tots topped with a creamy queso (seemed to be a mixture of a mild cheddar and cream cheese to stabilize it), even more shredded cheese, famed “Disney chili” (similar to what you’d find at Casey’s Corner), green onions, and a huge dollop of cool sour cream. It’s simple food done right, and in a large enough portion that you could certainly make a meal out of this one bowl, if you didn’t feel like sharing (a tough call with actually good food, I know). There are quite a few specialty drink options on tap at Woody’s Lunch Box, including several alcoholic options, but on this very hot day, I sampled the non-alcoholic Mystic Portal Punch ($4.49), which can also be served in the immensely popular souvenir alien sipper (featuring The Claw as the straw!) for $16.19. The drink itself is Powerade berry flavor with lemon-lime and tangerine flavors – overall, it’s mostly a zippy tart fruity drink that doesn’t have a terribly distinguishable single flavor. It’s refreshing and not too sickly sweet, so if you’re not in the mood for soda or cold brew coffee, it’s a strong contender for only a dollar or so more. Adults may gravitate towards the Grown-Ups’ Lemonade, a vodka lemonade with black cherry puree that is served on tap for $9.25. Finally, I tried both Lunch Box Tarts on offer here for “dessert” (which I say in quotes because these are also two featured items on the restaurant’s breakfast menu, which I hope to sample more of soon!). Flavors here for the oversized homemade pop-tarts are raspberry or chocolate-hazelnut (Nutella) with candied bacon, both priced at $3.29. I’m a chocolate lover, but I found this treat to be a bit dry and crumbly, with the ganache filling so rich that it only really helped once it sat out in the sun a bit and melted. The candied bacon on top was too sparse to really offer any true flavor or salt or smoke, so I would hesitate to recommend it if you want to try it for that.

The raspberry lunch box tart didn’t win this face-off by default, though, as the jam inside was ooey gooey and full of bright fruit flavor, with the sweet icing on top serving to contrast it well. Oddly, even with the same tart dough, the raspberry tart I sampled didn’t have the same dry and crumbly texture – it was bit flakier. I’m not sure if the moisture from the jam contributed to that, or if it was just a different, better made batch of dough, so your mileage may vary. Something to consider – if you’re just in search of these treats and the line for the Lunch Box is long, be on the lookout for roving carts selling them, as well. I spotted a Cast Member with a few for sale near Alien Swirling Saucers, and she mentioned they hoped to keep this going in the future.

My meal with three entrees, two desserts, and one specialty drink ran me $47.47, which in Disney quick service terms, isn’t all that bad – three adults would have been satisfied off of this order, and a family of four with kids could’ve definitely had enough to eat with a similarly sized order. Kid’s meals are on the menu here (with grilled cheese and a cold smoked turkey sandwich, but your better bet is probably to share one of the standard entrees here, as the offerings are so similar and not much cheaper.

A note for those with dietary concerns – I did ask around and several of the options, while not listed explicitly as such, can be made vegetarian or vegan upon request. Woody’s Lunch Box does have the ability to make a vegan grilled cheese or vegan Totchos (featuring vegan chili, though you may need to ask about the possibility of vegan cheese on top). The Totchos can also be made gluten-free, so be sure to talk to a Cast Member about this option if you are interested.

Overall, I think Woody’s Lunch Box is a real winner for Toy Story Land, Disney’s Hollywood Studios, and Walt Disney World quick service dining in general. None of the food is mind-blowingly original, but it fulfills a need for simple but well-made, approachable food that kids and kids-at-heart can enjoy on-the-go. I would definitely recommend stopping here on your visit to Toy Story Land!