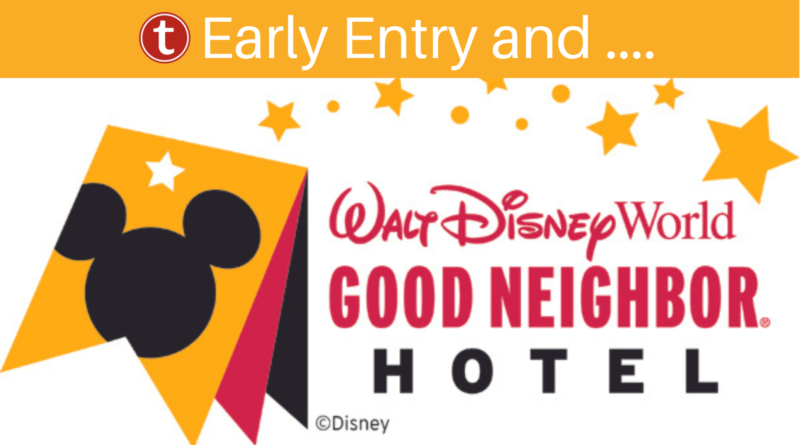 A couple of weeks ago I heard from my friend Justin, who had friends staying at a Disney Springs hotel.  Justin had the following question:

How do my friends get access to Early Theme Park Entry? We’ve been running around the hotel asking the staff what to do, and none of them knows what we’re talking about.  Do we just show up at the park?  We don’t have My Disney Experience accounts, and I doubt the Magic Kingdom Cast Members are going be able to scan our third-party room keys to prove we’re eligible.

I read this question on the Disney Dish podcast, and got dozens of emails from guests who’d gone through the exact same thing.  So I thought I’d do some research to help future guests get this done faster.

What Is Early Theme Park Entry?

Those extra 30 minutes in the park will allow you to see many more attractions than off-site guests. During our testing during Christmas Week 2021, we saw the following:

That’s roughly 50% more attractions in roughly 50% less time, during one of the busiest weeks of the year.  So Early Theme Park Entry helps avoid long waits in line. It’s valuable.

Some non-Disney hotels – mainly the Good Neighbor hotels at Disney Springs and Bonnet Creek, plus Shades of Green and the Four Seasons, get the Early Theme Park Entry benefit too.  The next section lists each hotel that we know gets Early Theme Park Entry, gives instructions on how to link your reservation in the My Disney Experience (MDE) app, and provides fallback methods that might work in the event MDE doesn’t.

Before we get started, here’s a look at My Disney Experience’s “Link a Hotel Reservation” screen.  We’ll be referring to it a few times later.

If you’re making a Good Neighbor hotel reservation through Disney’s website, your reservation will likely be linked to My Disney Experience automatically.  But many folks don’t do that. For example, if you’re using Hilton or Marriott points to book your Good Neighbor reservation, that’s got to be done through the chain’s website. This article guides you through how to link that reservation to MDE once it’s made.

Linking your Swan, Swan Reserve, or Dolphin reservation is about as easy as it gets: Just enter your hotel confirmation number into MDE, along with the last name on the reservation, and you should be set.  This isn’t surprising, because these three hotels are probably the most integrated into Disney’s benefits programs of any non-Disney hotel in Walt Disney World.  Other than using third-party bus services (and having Magic Kingdom guests dropped off at the Transportation and Ticket Center instead of the park entrance), there are few benefits for Disney-owned hotel guests that are not also afforded to guests at the Swan, Swan Reserve, and Dolphin.

Also, the Swan and Dolphin have their own app, with instructions on how to link your reservation into MDE:

A Disney Dish listener named Jeff had this to say about linking his Shades of Green reservation:

I can confirm that those staying at Shades of Green can link the reservation on MDE to allow for extra hours access. We did this in August and again for an upcoming week – it works well. MDE knows the number of folks in the reservation and only that many can be chosen in MDE. (By the way, Shades has a really nice indoor set-up at the bus stop too.)

I was surprised to hear that it’s possible to link reservations made at the B Resort and Spa to MDE.  The trick is that it might take a few days for your B Resort reservation information to be transferred to Disney’s systems – it doesn’t appear to be as fast as with the Swan, Dolphin, or Shades of Green.   That’s fine if you’re making reservations months in advance, but less good if you’re taking a last-minute trip and need to do things in a hurry.  We’ve heard the transfer time can be anywhere from two to three days, so plan accordingly.

The Hilton properties proved to be the most difficult to research for this article, because guest experiences were all over the place when it came to linking reservations in MDE.

Our friend Brendan said this:

I’m a big My Disney Experience guy, so I’m no stranger to planning, linking, booking, etc. For some reason, however, our Hilton reservation wouldn’t link in the app. After asking about a dozen people how I could make sure I’d be able to get into the park for early entry, (including official Disney guest relations at Disney Springs who said they could not help), we finally landed back at the concierge desk inside the Hilton hotel. After going through a few different staff members who acted as if they’d never heard of Early Theme Park Entry, we got to a manager who could help.

Believe it or not, the answer is that they give you what is essentially a business card. One for each guest, the concierge writes down a bunch of numbers (basically a confirmation code), the dates of your stay, and each guests’ name on little paper cards with Disney branding on them, and those are what you show to the park gates cast members for early entry. To my understanding, this is the “backup” process for all of the 3rd party Disney Springs hotels/resorts.

I’ll take a minute here to echo Brendan’s point about Disney Springs Guest Relations not being able to help.  I asked Disney Media Relations for guidance on how Good Neighbor hotel guests could make use of Early Theme Park Entry.  They haven’t responded.

Our friend Katie chimed in with this experience:

I called the Hilton Bonnet Creek with this exact question:

Question #1 How does a guest prove they are at a Good Neighbor hotel for Early Entry?

Question #2 But what if that doesn’t work? Is there a card?

Hilton Concierge’s Answer YES, but the guest MUST ask for this “magic card” and it’s good for their length of stay.

This is a lot of work! Not only are there hoops to jump through, but the hoops are on fire in quicksand. I worked Magic Kingdom Guest Relations in the early 2000’s and I long for the days of a simple FastPass!

We’ve also heard from guests who were able to link Hilton reservations in MDE without having to contact the concierge or MDE technical support.  In all of those cases, the guests waited at least three days between making the reservation with Hilton, and linking the reservation in MDE.  So that might be the secret. Again, it’s not helpful if you’re making a last-minute trip to Walt Disney World.

I’m a passholder and I typically stay at one of the offsite Disney Springs hotels that provide early entry.  Most of my encounters involve really kind Cast Members who have no idea about the policy and need to ask a manager. This most recent visit, the Cast Members actually had to Google Disney World’s “Good Neighbor” hotels to see the list. To make it even more complex, at the time, the Holiday Inn name was listed on Disney’s website incorrectly, leaving me trying to explain that the hotel I was staying at was in fact the Disney Springs location.

John’s email arrived when I was tagged in a Twitter thread about Disney call centers giving out wrong information. Disney’s a big, complicated place, so it’s not really surprising that Disney itself doesn’t always have the right information.  (But still, if they don’t, who does?  And why is it on the guests to correct it?)

The Wyndham Garden Lake Buena Vista is the hotel that Justin’s friends were staying at, and that insipired this blog post.  It’s safe to say that asking the front desk there for help, didn’t result in an optimal guest experience.  But like the other hotels, if you allow a couple of days for your Wyndham reservation to make it to MDE, you should be fine.  And if that doesn’t work, ask for the magic business card.

Ah, this is a little trickier because there’s three companies involved: Disney, the hotel chain you’re staying at, and the third-party booking engine.

Lucky for us, a Disney Dish listener named Robbie found a solution by calling the Disney Wholesale phone number:

As a huge fan of scouring Hotwire’s “Hot Rate” hotel offers and finding the Disney World resorts hidden there, I discovered a great work-around. After getting my room confirmation from Hotwire, I call the Disney Wholesale number (below).  I give them my Hotwire confirmation number and they convert it for me to a MDE friendly reservation number within minutes of making the original reservation. I hope this helps, and keep up the good work!

Other Good Neighbor Hotels and Information

This is what I’ve found out so far for these Disney World Good Neighbor hotels. The common themes are:

If you’ve stayed at another hotel and figured out how to do link your reservation to My Disney Experience, let me know in the comments.  And if all of this sounds wayyyy too complicated, our Travel Agents can help with your hotel booking.

Also, if you’re thinking about using your Good Neighbor hotel’s transportation, make sure to verify that the hotel shuttle will get you to the park in time to take advantage of Early Theme Park Entry.  Some off-site shuttles only operate a few times each day, and some don’t start until close to park opening. In those cases, it might be more useful to take a taxi or ride-share to the parks.  It’ll save you a ton of time in line.