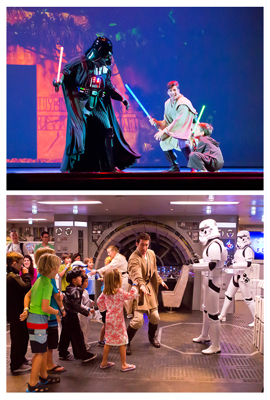 I just disembarked the first sailing of the new (as Captain Henry referred to it) Disney Dream, and she looks amazing! Not that I expected any less. I’m not going to lie, I love being on the first sailings right out of dry dock, which I’m sure has nothing to do with my deep-seated desire to be the first person to be in the front of the line and the first to see everything. Disney surprised us this time — while they had announced several things we could look forward to after dry dock, there were several things they had not announced! And here are ten of my favorites: 1. The Millennium Falcon – Really what else needs to be said? Disney added Star Wars to the Disney Dream.  Okay, maybe that does take a little explaining. Disney completely removed the (cute but not a huge loss) Explorer Pod which was themed after Disney Pixar’s Finding Nemo in the Oceaneer Youth Club and replaced it with the interior of the Millennium Falcon. Yep, you read that right; you can sit in the pilot seats and steer as you are blasted into hyper-drive through space and onto various planets like Tatooine and Endor, where your flight continues. The details are just amazing: There’s a life size R2D2 that moves and talks!  (I am not hyperlinking R2D2 because if you don’t know who he is, you need to skip to item number two.) There are also life size replicas of the Marksman-H combat remote, lightsabers, and video games to try. Seriously, we were sad when open house ended and the children reclaimed the club! 2. Vanellope’s Sweets and Treats – I’ll be the first to admit that, as a general rule, I don’t like adding upcharge items to the ships. Vanellope’s was a pleasant surprise, though!  If you are not familiar, Vanellope von Schweetz is a character from the wonderful movie Wreck it Ralph.  Vanellope is (spoiler alert) the ruler of her Sugar Rush, the kingdom inside her video game. The theming of her shop on the Disney Dream is spot on. It’s bright, colorful, and whimsical, all the things something named Vanellope’s should be. The gelato and ice cream are made on the ship with the flavors changed daily. We also watched them make candy for a little while one day. Ice cream was $2.50 for one scoop, $3.95 for two, and $4.95 for three. Gelato is a little more—$2.95 for one scoop, $4.45 for two, and $5.45 for three.  There are some great sundae options, and we absolutely loved our Race Kart Sundae which included three scoops of ice cream, five toppings, whip cream, and cherries in an adorable souvenir race car for $12.95.  Bulk Candy could definitely add up at $9.95 per lb., so I’d go easy on that wall!  Cupcakes, sugar cookies, truffles, caramel apples, and other fresh sweets ranged from $1.95 to $9.99.  For us the hard part wasn’t finding something we wanted to try, it was finding a time when we were hungry enough to try it! As a note, despite the added upcharge sweets in Vanellope’s, we still saw all the same free treat offerings around the ship that Disney has always had—like free soft-serve ice cream.

3. Satellite Falls – Anyone who has been in the Disney Fantasy’s version of Satellite Falls can testify that it’s a great use of the space on deck 13 forward. It’s a quiet, relaxing, adult-only area and a great place to cool off if the other pools get crowded. The Dream also added shade all around Satellite Falls, which was a space that used to be devoid of guests because there was nothing to do there but lay in a chair and bake in the sun. Now they’ve made it a place you actually seek out on hot days. 4. Disney Infinity Toy Box – I’m not a video game person by any stretch of the imagination, but the new Disney Infinity Toy Box in the Oceaneer Club is super cool. If you’re not familiar with Disney Infinity, it’s a game platform where you can become your favorite character and roam the game world (all for a price). Of course there’s much more to it than that, but let me tell you, now that Disney has so brilliantly added Star Wars to their repertoire, walking around Cinderella castle as Yoda while interacting with Elsa is interesting to say the least. The new room in the club has several individual game stations, a display of every figure there is, and the piece de resistance – a life size game with giant screen. With that one the children stand on the base, pick a character, and the character shadows their movements. Soooo cool! There’s even free exclusive Disney Infinity content you can unlock and bring home with you to your own game. 5. AquaDuck Shade and Heat-Resistant Floor – I love the AquaDuck, always have, but it can be hotter than Hades waiting in line to ride. Disney added shade all over the top decks, but the shade over the AquaDuck line is some of the most welcome. But they didn’t just stop there! Mindful of your inability to wear shoes in line to the ride, they also added a special textured painted area to stand on that keeps your feet from burning off on the hot deck! Brilliant.

6. Bibbidi Bobbidi Boutique – Parents of aspiring princesses and pirates rejoice!  You now have even more chances to blow through money onboard!  The extremely popular Bibbidi Bobbidi Boutique from the parks, the Disney Magic, and the Disney Fantasy has made it to the Disney Dream. Just like the other ships, it’s an adorable princess and knight makeover space which will specialize in pirate makeovers on pirate night. Just try not to smile at the little pint size princesses wandering the halls.

7. Funnel Puddle Wading Pool – The Dream was always a beautiful ship, but it just flat out didn’t have enough pools.  I think Disney thought adding the AquaDuck and a larger splash area for smaller guests (Nemo’s Reef) would take so many people away from the pools that they would be okay.  The AquaDuck is great, and while it is a big draw, people still need pools. The Fantasy corrected that by adding Satellite Falls, the AquaLab, and the Funnel Puddle pool. The new Funnel Puddle pool on the Dream is a great size, with a fountain coming out of Donald Duck’s hat. In addition, they put a sound blocking kind of wall next to it which I’m sure the adults in the adult pool right below it greatly appreciate. Great ideas all around! 8. Jedi Training – The Dream has added two different chances to train the young padawans. Jedi Training – Experience the Force was held in the Millennium Falcon in the Oceaneer Club, and during our cruise it was held during Open House so adults were welcome (Woot!). After a preshow of clips from the classic Star Wars trilogy to get everyone excited, the young Jedi in training were instructed in the ways of the force and warned against giving in to the dark side. They tested their new found powers by moving parts of the ship with the Force Push. The Jedi Master wisely did not pass out lightsabers to 20+ children who, one can only assume, would have immediately started battling each other and anything within their reach. They stuck to Force Push and Jedi Mind Tricks! Their powers came in handy when Stormtroopers (!) and an Imperial Officer tried to arrest the Jedi Master.  Scott Sanders of Disney Cruise Line blog was with us watching the training, and has a great video on his site.  The second training we attended was called Jedi Training – Trials of the Temple and was held on our sea day in the Walt Disney Theater.  While not an exact replica of the Jedi Training Academy held in the parks, you will undoubtedly recognize the similarities.  This time 6 children chosen as they entered the theater were given robes, lightsabers, and probably not enough training before battling Darth Vader up on stage while the audience cheered them on.  This was also very well done (aside from the Jedi who kept passing out lightsabers while holding them by the activated blade, obviously repeatedly cutting off her hands in the process) and well worth 20 minutes of your time. 10. Concierge Shade and Jacuzzi – One completely unadvertised addition to the Dream was the addition of shade and a Jacuzzi to the concierge sundeck. The concierge sundeck is a neat idea, and a large space on the Dream and Fantasy, but with painted glass walls on all four sides, direct sun, and no water feature it essentially turned into an oven during the day. I can’t even tell you how rarely I saw people using it. Well, Disney just made it not only usable, but a place concierge guests will probably seek out on crowded sea days. We tried the Jacuzzi, and while the day we were in it there were some dirt issues (probably from the new pumps), the water wasn’t oppressively hot and felt great. I really, really loved this enhanced area.

So those are my top 10! All the nightclubs also had their technology upgraded, some got new seating, the sports deck got new (I think?) foosball tables, a new Frozen horn and there were other not quite as noticeable upgrades. All around it was a huge success in my opinion! What do you think your favorite will be? Do you have any questions?