In early November I’ll be going to my first ever character breakfast on Universal property, and it will be at Jake’s American Bar at the Loews Royal Pacific Resort. After I made my reservation (through OpenTable), I realized I had never eaten at Jake’s. I consider the Royal Pacific my second home in Orlando but spend a lot of my eating time either poolside at the Bula Bar & Grille or in the lobby area at the Orchid Court Lounge. So on my most recent visit to the Universal Orlando Resort, I decided to hit Jake’s twice in one day to check it out.

Jake’s is located on the ground floor of the Royal Pacific and is right across from the Islands Dining Room.

Right next to the hostess stand was this sign for $10 beer flights. At this point I knew I’d be trying all of them. About once a month Jake’s holds a Beer Dinner, where there is live music and an all-you-can eat situation involving food and beer. For the month of October it was held on Friday the 4th, and in honor of Oktoberfest they christened the first annual Beer Festival. Long story short, if you like beer you’ll love Jake’s. The beers you can choose from for the flights included: Stella Artois, Bell’s Best Brown Ale, Kona Fire Rock Pale Ale, Clear City Jai Alai, Yuengling American Amber Lager, and Goose Island Honker’s Ale. We ordered two flights to make sure we could try all of them. Since there were six beers to choose from, but eight slots in our beer flights, we decided to try them all before choosing which final two we wanted. While we were deciding, the server came by and gave us a glass of Cigar City Brewing‘s Blueberry White Oak IPA. Cigar City Brewing is a local brewery located in Tampa and was a part of the inaugural Beer Festival the night before.

The Blueberry White Oak, Kona Fire Rock Pale Ale, and Goose Island Honker’s Ale were the big hits, the latter possibly for the name alone. Jake’s also now has it’s own brew on tap, JAKE’S AMERICAN RED LAGER. This is a tasty beer, very similar to Killian’s Red and even the Hog’s Head Brew in the Wizarding World.

While we were enjoying the beer, our appetizer of the Homemade Pretzel Rods arrived. Costing $7, these were gigantic and came with two sauces: tangy mustard and four cheese porter fondue. I consider myself a connoisseur in the area of breadsticks, so when I say these were good you can take that one to the bank.

Next up was the Fresh Garden Greens salad. This consisted of local organic greens, cherry tomatoes, carrots, cucumbers and had a side of Ginger-soy dressing. ($10)

The biggest hit of the afternoon was the Tomato Mozzarella Grilled Cheese Sandwich. This had sun dried tomato pesto, fresh mozzarella, and balsamic glaze. ($12)

Raves across the table for the sandwich. But one of Jake’s specialties is burgers…

And you gotta end your meal with a wonderful bread pudding.

I know that many theme park foodies appreciate when their restaurant has a complete back story, so here’s a full page history of “Jake McNalley” and his association with Royal Pacific Airways. This also continues the overall theme of the resort, which centers around the 1930s and the Golden Age of Travel.

At this point we finished out meal and headed over to Universal Studios Florida for Halloween Horror Nights. While at HHN we also tried a whole bunch of food and alcohol – for research purposes, of course (see this weekend’s edition of the Saturday Six for the results) – but afterwards we stopped by Jake’s to cap off the night.

While Jake’s Late Night Menu is very limited, it does have a fully stocked bar.

First order was for the Sweet & Spicy Buffalo Wings. These were coated in a tangy mustard sauce and had ale cheese sauce for dipping. Good quality wings, but a slight step down from your wing offerings at places such as Buffalo Wild Wings or Duffy’s. ($11) We also tried the Cheese Pizza. This was better than expected hotel pizza. ($13) We sat at the bar itself, but there are tables nearby, as well. Overall Thoughts: I consider Jake’s American Bar to be a pretty big hit. The lunch menu was large, everything we had was very good, and there several more items I want to try on my next trip. Service was fast and not pushy, making for a very relaxing meal. For the late night trip, it was a good discovery to find a place in the hotel that stays open late to order drinks and some light fare. I remember on one of my previous trips I actually walked to CityWalk at midnight because I had a craving and just assumed everything in the hotel was closed. The quality of the food has me really looking forward to the character meal now. I will report back in a month. Same TouringPlans time. Same TouringPlans channel.

Special thanks to Universal NOW‘s Brandon Glover for his assistance with this article. 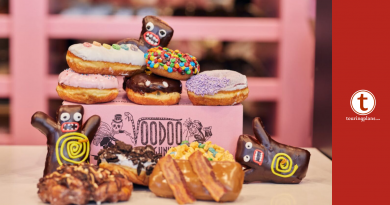