I’m a big fan of all three of Universal’s on-site hotels but the Royal Pacific Resort is definitely my favorite. Even though I have been going to the hotel for years, I have always eaten my meals at the parks or at CityWalk. After having a terrific breakfast buffet experience at the Islands Dining Room earlier last year, I realized I needed to start checking out all the eateries at the Royal Pacific. First I tried lunch and drinks at Jake’s American Bar, followed by the Royal Pacific’s Character Breakfast (also at Jake’s). In January of this year, Emeril’s Tchoup Chop made some major changes by bringing in a new chef de cuisine, Ryan Vargas, and completely updating their lunch and dinner menus. Seth Kubersky wrote an article on the TouringPlans blog recently that explored the new menu, and that sealed the deal for me. I needed to try Tchoup Chop ASAP.

Tchoup Chop is located on the ground floor of the Royal Pacific and is directly across from the guest exit to the water taxis to CityWalk. The decor inside is stunning, with a pond in the center that is really eye-catching. The amount of color throughout the main dining area is the first thing you will notice when walking in through the front doors. I was with a party of seven for the evening, including several celebrity Disney bloggers. After being seated, I asked our server the question that has been on my mind for years…how do you pronounce Tchoup Chop? Answer: it is pronounced “Chop Chop.” The first things delivered to the table were orders of shrimp chips. These came with an incredible peanut dipping sauce that was out of this world – so good I must have asked for half a dozen refills and dipped almost everything in it throughout the night. Next up, the chef brought over Tuna Lollipops for the table. As a fan of NASCAR Grille in CityWalk, I knew at this point I was in way over my head.  I’m used to pretzel breadsticks to start a meal, not art. Just amazing. These were compliments of the restaurant. They must have heard about my scathing review of McDonald’s at Downtown Disney that closed the place and brought us BabyCakes NYC. You’re welcome, Dear Readers. Several plates of sushi were brought out with the table consensus being that the avocado based one being the best. I believe it was called the Soft Shell Crunch. I’m not a fan of sushi, but those who enjoy it said everything was really fresh and very high quality. I had the Iron Skillet Seared Edamame ($5), which was excellent with lots of seasoning, and my peanut dipping sauce on the side. With the huge amount of beans, I’d say this is one of the better values at any resort restaurant. Another appetizer, the Tchoup Chop Crunchy Shrimp with hot and sour chili glaze ($10) The Tchoup Chop Salad with mixed Asian greens, candied pecans, oranges and creamy soy dressing ($9). Two of us had this at the table, including myself, and it was excellent. Very flavorful. An order of Kiawe – Smoked Baby Back Ribs with Asian barbecue sauce ($10) The sauce was very good, but the meat was a little fatty. Part of the big overhaul of the restaurant was the introduction of a robata grill. The server told us that this grill sears meat, vegetables, and seafood at temperatures up to 1,000°F, which is approximately the temperature of Animal Kingdom in July or August. Tchoup Chop is actually only the second restaurant in Orlando to have a robata grill, the other being Popeye’s Chicken on Sand Lake Road. Just kidding, it’s a place called Dragonfly Robata Grill in the Dr. Phillips area. The searing added a good amount of crispiness to the vegetables that I liked a lot.

From the robata menu, an order of Asparagus ($6) Yakitori Pineapple Chicken ($8) Was told that this was not worth the money as it tasted too bland. Thai-spiced Lamb Satay ($12) The lamb however was very unique and worth the price. Now it’s time to go to desserts. I’ll be upfront about this. I like desserts. I think regular readers of my work know I like desserts. So when I tell you a restaurant has good desserts, you can take that to the bank. Tchoup Chop has great desserts. In full disclosure, the desserts were provided compliments of the restaurant.

First up, some of their homemade ice cream and sorbets. The mango one was a huge hit at the table. Next was Emeril’s Signature Banana Creme Pie and several Crème Brûlées. The cake was amazing and had huge chunks of banana in it. The crème brûlées were even better than the cake and reminded me of the wonderful desserts I had on my Royal Caribbean Freedom of the Seas cruise last year. Next was the Crispy Guava & Cream Cheese Dumplings. I have no idea what guava is, but this was hands down one of the best desserts I have ever had. The cream cheese dumplings would melt in your mouth after biting into them. I’m not even sure what the following dessert is, as it never made it over to my side of the table. That’s a pretty good sign that people liked it, though. I think everyone came out impressed by Tchoup Chop with the desserts, themselves, being almost destination dining. Several members of the party said they would return at the very least for Happy Hour (Daily from 5-8PM), and there is a large bar area that you can sit at. The service was impeccable, as the wait staff was very attentive and was always there for things like refills of water without having to ask. The atmosphere of the restaurant is like an upscale P.F. Chang’s, and for me personally, the quality of the food and service it made me want to try the Emeril’s restaurant in CityWalk. The bill for our party was $298.21 after tax, and that included 10 drinks (mostly alcohol) and 17 food dishes. There is a children’s lunch and dinner menu, but I think families with young kids may have an easier time over at The Kitchen at the Hard Rock Hotel. I would consider Tchoup Chop perfect for date nights or get-togethers with friends.

Special thanks to Seth Kubersky, Josh EasyWDW, Anthony SOTMKblog, and Morgan Crutchfield for this assistance with this article. 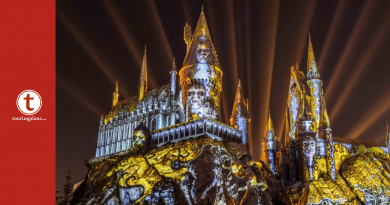