Today, Disneyland Park celebrates 59 magical years, and preparations begin for the resort’s next milestone birthday. As some fans get a sneak preview at what’s coming to the resort for the 60th Anniversary, let’s take a look back at “The Happiest Birthday On Earth” – July 17, 2005, Disneyland’s 50th birthday!

The Disneyland 50th Anniversary celebration was a huge campaign that reached Disney Parks worldwide – as well it should! All of this may have been started by a mouse, but when it comes to family vacations as many of us know them, it was all started by Disneyland.

The celebration kicked off officially on May 5, 2005, offering special experiences, new entertainment and décor throughout the resort. In addition to the typical banners and signs that advertise any new campaign, dozens of photomosaics – created with pictures submitted by guests from 50 years of vacations – were set up throughout the park.

Attractions that opened originally with Disneyland were identified with a golden ride vehicle among each fleet. (And I’d be lying if I didn’t admit to carefully timing our line movement so we could ride in golden Dumbo and a gilded Teacup!) Even Hidden Mickeys got a makeover, as a special anniversary edition scavenger hunt challenged guests to

Of course, the crown jewel of Disneyland was treated royally as well. Unlike the widely criticized pink birthday cake that took over Walt Disney World’s Cinderella Castle for the Florida resort’s 25th Anniversary, Sleeping Beauty’s Castle got a much classier dressing, including golden bunting and five themed crowns for her turrets – one for each incredible decade.

A new nighttime spectacular – “Remember, Dreams Come True” – debuted, with Julie Andrews narrating a day in Disneyland in fireworks and pyrotechnic effects. Park guests also enjoyed Walt Disney’s Parade of Dreams, as a cavalcade of characters led by Tinker Bell welcomed us all to their family.

All of these details were part of the longer celebration, enjoyed by visitors for more than a year. But what was it like to be there for Disneyland’s ACTUAL 50th birthday?

Well, to begin, the day started early. Really early. Like, the night before early. There were reports that some visitors got in line late in the afternoon, but we were too busy enjoying Disney’s California Adventure to realize it. It wasn’t until we reached the esplanade at park closing that we realized the line was already forming, and we did what any good fan does – we joined the queue.

It was just about midnight and, while we weren’t the FIRST guests, the mass of people behind us grew exponentially, and quickly. For a few hours, we made ourselves comfortable, the line snaking down the yellow brick road around the green traffic cones. It became quite a small world after all as we made fast friends with the strangers around us, sharing a slab of pavement for a night.

As the regular day guests filtered out and operations for July 16th began to wind down, those of us waiting for history were moved to another area – right inside Disney California Adventure! This was in the days before 24-hour parties, so I never dreamed I’d be having a sleepover in a Disney park. Yet, there we were, curling up on the sidewalk of the Hollywood Pictures Backlot (now known as Hollywood Land), under the neon lights of Schmoozies.

There was very little sleep, of course – everyone was too busy sharing their favorite Disney memories and buzzing with excitement. The family next to us were locals from Tustin, CA, so we swapped stories and compared our home parks – Walt Disney World for us, Disneyland Resort for them.

By the time the sky woke up hours later, the line extended throughout most of California Adventure. My sister, who joined just an hour or so after we did, was caught in the mass all the way in Paradise Pier! Crowds were organized by colored wristbands, and we were within the first couple of corrals – we were told that was among the first thousand or so people out of more than 10,000 who spent the night. Now, I always take crowd estimates with a grain of salt, but in this case? Well, I believe it.

As the corrals moved towards Disneyland’s gates, we received our special Mickey ears and commemorative maps and times guides. Main Street, USA was lined with more Cast Members than I’ve ever seen in one place, all waving at us and welcoming us to the “Happiest Birthday On Earth.” It was like we were our own parade, and even though it was a LOT of people, it was no rampage.

Merchandise lines were long, but it was our only chance to score commemorative pins, shirts, and other items. Still, monitors throughout the park gave everyone a chance to watch the special ceremonies, including a park-wide chorus of Happy Birthday, and appearances by Bob Iger, Michael Eisner, Art Linkletter, Arnold Schwarzenegger, and Diane Disney Miller.

There were also cupcakes. Lots. And Lots. Of cupcakes. And I’m cupcake lover, so I was ok with that, but it seemed every counter we passed was another chance to push sugar down our throats, and I guess we probably needed it, with all the excitement.

Then, on July 17th, 2005, at precisely 4:45pm, guests gathered around the flagpole in Town Square for the most special moment of all – Walt’s dedication speech. It is often noted that Disneyland is a special place because it is the only park where guests can truly “Walk in Walt’s Footsteps.” Staring down the same Main Street where Walt strolled can make any Disney fan teary-eyed, but hearing his words echoing off those buildings – particularly The Firehouse and the light in its window – gave me a new appreciation for what he built.

“To all who come to this happy place…Welcome.”

Fifty years to the day – nearly to the moment – Walt Disney’s words held as much promise as they did on Opening Day. We look forward to celebrating again in 2015!

What are your thoughts on Disney parks anniversary celebrations? Still upset about the cake castle or looking forward to Disneyland’s promotions in 2015?

Please welcome Kylene Hamulak to the TouringPlans blog team. Kylene was raised on Disney and, as a pass holder and DVC member, is lucky enough to visit several times a year.

Though she lives in Connecticut, Kylene considers "home" to be the land of purple signs leading her to the Magic Kingdom. She is currently training for her first runDisney event - The 2015 Glass Slipper Challenge - while watching Frozen on the treadmill every Saturday morning. Kylene loves storytelling and has been known to frequently suffer from eye sweats when walking down Main Street, watching any fireworks finale, and, especially, hearing the first 7 notes of When You Wish Upon A Star. 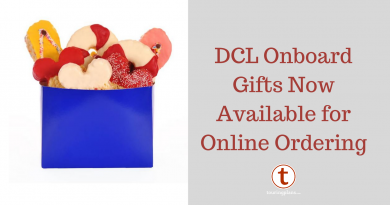 Menu Monday: How to Order the Chocolate Glass Slipper Dessert