It’s that time of year! Holiday sailings for the Disney Cruise Line! I just returned from a Halloween on the High Seas sailing on the Dream and we enjoyed our Thanksgiving cruise on the Disney Fantasy so much last year that weve booked another on the Disney Magic this year! The Halloween sailings for 2014 started in September and continued through the end of October. The Very Merrytime sailings start November 8th and go through the end of December. All Disney cruises are magical for me, but the holiday cruises have something a little extra. Here are 10 reasons to try one!

1. No Cooking Holiday Dinners – Oh, yes! This is my favorite part. If you are onboard for one of the big holidays like Thanksgiving, Hanukkah, or Christmas – you do not have to cook!!!!!! Equally exciting – you do not have to clean, so you get to enjoy the holiday as well!!!! Win win win. We had a choice of seven entrees for our Thanksgiving dinner. And I can testify firsthand that the turkey was delicious. On our Halloween sailing, our servers even brought us an absolutely adorable cake in the shape of a spider.

2. Gorgeous Decorations – The ships are gorgeous any day of the year, but they are really done up for the holidays. For the Halloween sailings, there are four different Halloween trees decorated with pumpkins. Actually, they usually start off with just leaves and by the end of your sailing it’s covered in pumpkins. And don’t miss the portholes on deck 4, they have adorable Jack-o-lantern faces. During the Very Merrytime sailings, there will be Christmas trees everywhere! In the restaurants, in the atrium, in the terminal, even on Castaway Cay! There is also a giant gingerbread house in the lobby which they start constructing in early November and finish around the last week of November.

3. Build Gingerbread Houses and Carve Pumpkins – How about the quintessential Halloween activity – Pumpkin carving! Unfortunately, pumpkins aren’t available on every cruise (they weren’t on ours), so you can’t count on this one, but how fun does that sound? In addition to the giant gingerbread house being constructed in the atrium, guests onboard the Merrytime sailings will also have the chance to construct their own gingerbread house! Last year, guests requested tickets at guest services and were given a time to attend the class. We had a great time building, and decorating our gingerbread houses. Even those in our group who were, ahem, less successful in their building still had a great time. And, we unexpectedly enjoyed eating the remnants of our gingerbread house for days to come. You’ll find some other craft and holiday themed activities throughout the cruise as well!

4. Special Parties – All of the holiday sailings also include some extra parties! Mickey’s Mouse-querade Party involves games, trick or treating, characters, and dancing. We had a great time watching the activities and the costumes. My word, people are creative. There’s also a special “Sing and Scream” viewing of The Nightmare Before Christmas followed by a meet and greet with Jack and Sally. On the Merrytime cruises there is a Deck the Deck Tropical Holiday Party which also includes games and dancing, but with a Christmas theme this time. There are also special teen and tween only parties!

5. Special Activities on Christmas Eve and Day – On the actual holidays, you will find some additional activities like religious services, holiday-themed towel animals and Christmas caroling. If you are lucky enough to be onboard on the actual day, scour that Personal Navigator so you don’t miss any of the fun!

6. Adult Costume Contest – On the Halloween cruises there is a costume contest – but just for adults! There are five categories – Funniest, Most Spooky, Best Group, Most Original, and Most Disney, and trophies to be won in each. There were a ton of participants on our cruise. The crew chose which category each was entered in and they certainly tried to even out the categories, sometimes with some iffy choices. I’m not sure how Mrs. Banks and friends weren’t in the Most Disney category. One of them was Walt Disney for Pete’s Sake! How is Walt Disney not in the Most Disney category? But I digress. And this has nothing to do with sour grapes because my adorable little M&M group did not win. We were robbed thrilled to be nominated.

7. Tree-Lighting Ceremonies – Those Pumpkin and Christmas trees aren’t going to light themselves! So of course they are both lit during elaborate ceremonies involving storytelling, and calling to the trees to light! And barring any technical difficulties, they do!

8. Character Captures – For any characters stalkers out there, these cruises are a chance to see the characters in some great costumes. On the Halloween sailings, all of the characters were in spectacular costumes during the Halloween party. There was a meet and greet with all of them earlier in the day. Goofy was in a King Tut costume I have never seen before. It was amazing! On the Thanksgiving cruise we had pictures with Pilgrim Mickey and Santa Goofy. And what Merrytime cruise would be complete without a chance to talk to Santa? Not Santa Goofy, Santa Claus!! We know him!! Santa Claus is kind enough to take time out of his very busy schedule to stop by the Disney cruise ships during these sailings. He’s so cool.

9. Holiday Merchandise – Never one to pass up merchandising opportunities, there are pins, Tervis Tumblers, t-shirts, frames, photo albums, all sorts of things! If you’re looking for a Disney holiday souvenir this is your place. If do not want it to be Disney themed, you are definitely looking in the wrong place.

10. There Are Some Deals – If you are worried about prices, yes, the cruises on actual holidays can be priced very high. The good news is there are several cruises still included in the holiday sailings time frame, that are not during school breaks and thus much more reasonably priced. The Halloween holiday sailings in September were some of the least expensive cruises in 2014. And if the actual holidays are your only option, don’t despair! There are already some last minute IGT, VGT and OGT rates for Thanksgiving cruises on the Magic, Wonder, and even the Fantasy, and if you are military, the prices are even better. Check them out!

Have you tried a holiday sailing? What was your favorite part? 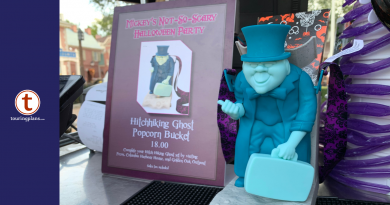