Here’s what you need to know to survive the Big One – big theme park, that is.

Plan At Least a Few Things Well In Advance

Because Walt Disney World is so much bigger, advance planning makes more of a difference here than it does in Disneyland. You can certainly turn up at Walt Disney World, buy a ticket at the Magic Kingdom gate, and have a great day, but you’ll likely have a much better time if you plan at least some elements of your trip in advance. You don’t have to plan every detail of your days before you arrive, but you should at least decide on some of your must-dos in advance of your trip: restaurants, attractions, or other experiences that you absolutely have to include. If you have the option, make some Fastpass+ selections before you arrive (you can always change them once you get there, using the My Disney Experience app). Get those tentpoles of your plan reserved before you do anything else.

Expect to Spend More on Lodging

The differences between on-site and off-site hotels are more substantial at Walt Disney World than they are in Disneyland. If you are used to snagging last-minute deals at one of the many serviceable motels on Harbor Boulevard or Katella Avenue in Anaheim, brace yourself: the prices in Orlando will likely be much higher, even with discounts.

However, the benefits to staying on-site are also greater. Walt Disney World hotel guests can take advantage of free shuttles and luggage service to and from Orlando International Airport. They also receive morning and evening Extra Magic Hours distributed among Walt Disney World’s four theme parks, compared to only Magic Mornings in Disneyland. In addition, Walt Disney World’s hotels are connected to the resort’s transportation network of buses, boats and monorails, which are crucial if you don’t plan to rent a car in Orlando.

More intangibly, the “Disney bubble” is a factor in Walt Disney World, in a way it’s not in Disneyland. You can step off your airplane and straight into Disney’s Magical Express, staying entirely apart from “real life,” if you so choose. Take advantage of the difference, and choose the resort whose whimsical theme most appeals to you, whether that means the sleepy Louisiana-tinged Disney’s Port Orleans Riverside Resort (about $191 and up per night), or the larger-than-life immersion in animated features at Disney’s Art of Animation Resort (about $125 and up for regular rooms, or $300 and up for suites).

Everything is Farther Apart Than You Think

Because parks and resort hotels in Walt Disney World are so large, and so spread out from one another, you will spend much more time in transit than you expect. Only a small handful of hotels are walkable to any of the theme parks, and Disney’s Animal Kingdom can only be reached by car or bus. If you are considering off-site lodging, spend some time looking at Google Maps and estimating the travel time between locations, so that you can allow yourself sufficient time to arrive and park in the mornings, and to leave for breaks or meals. Even within your resort, buildings may be far apart from one another. Several Walt Disney World resorts are large enough to require internal shuttle services, and some rooms are a mile away from the food court or gift shop. Wear comfortable shoes!

This also means that park-hopping can be an ambitious plan. If you do not have a car, plan to spend 20-30 minutes getting between parks, or slightly more if you arrive at the bus stop right after your bus has left. If you do have a car, things could get more complicated. For example, let’s say you have a park-hopper ticket and a rental car, and decide that you would like to hop to Epcot after the end of the Festival of Fantasy parade. You would take a ferry or monorail to the Ticket and Transportation Center, a parking lot tram to your car, drive to the Epcot parking lot, and then take another tram to the Epcot gate. This doesn’t mean that park-hopper tickets aren’t worthwhile, but you probably will not move back and forth repeatedly between parks during the day, the way you might at Disneyland.

The Weather Can Be Wild

You might notice, after you arrive at Walt Disney World, that more of the attractions and queues are indoors or under cover. That’s because the weather and the climate of central Florida is much more temperamental than that of sunny southern California. Even before this year’s drought, the amount of rain you could expect on a given day in Disneyland was much, much lower than what you might expect at Walt Disney World. The afternoon thunderstorms are almost as regularly scheduled as the afternoon parades. Make sure you dress comfortably for the heat and humidity during most of the year, and be ready for sudden downpours. However, don’t get discouraged if it starts to rain while you’re in a park. Many of those showers are short-lived, and if you can wait out the storm, you might be rewarded with a less-crowded park right afterward.

Speaking of meals, the definition of “advance” in “advance dining reservation” is also much longer for Walt Disney World than it is for Disneyland. At Disneyland, you can make restaurant reservations up to 60 days in advance, and you can often get away with less than that. At Walt Disney World, you can make restaurant reservations more than six months in advance in some cases, and for high-demand restaurants, calling at 6:00 AM Eastern on the six-month mark may not be early enough!

Even if you don’t make any restaurant reservations prior to arriving in Orlando, keep in mind that Walt Disney World has 107 restaurants accepting reservations to Disneyland’s 25, so you will still have opportunities to find a place to sit and eat. You can still make late reservations on your phone’s MyDisneyExperience app. However, Walt Disney World has some amazingly unique dining experiences, from a meal with the princesses inside Cinderella’s Castle to Afro-Indian cuisine overlooking the savanna, so it’s worth it to sacrifice a little flexibility to try some of these.

One of the many reasons character meals book up quickly in Walt Disney World is because they are generally more predictable than those in Disneyland. While you may enjoy the random assortment of characters that appear in Goofy’s Kitchen, the character meals at Walt Disney World tend to have a more-or-less predictable rotation of characters. This means that you can skip some of the character lines in the parks if you strategically plan character meals around which characters your group most wants to meet. For example, if you want to make sure you meet Mickey, Minnie, Donald, Goofy, and Pluto, you can visit the Epcot Character Spot and Donald’s location in the Mexico pavilion and Pluto’s meet near the Epcot gates, or you can just plan a meal at Chef Mickey’s.

In the parks, this also means that you probably won’t see as many characters out on the street. Some characters do meet outside in the hot sun, but those that do have scheduled greeting times that you can find out in advance, from the park Times Guide, or in the MyDisneyExperience app. All other characters have organized meets in themed settings, similar to Mickey’s and Minnie’s Houses in Disneyland’s Toontown, or Pixie Hollow. If you still want to be surprised by who you meet, hang around Main Street U.S.A. in Magic Kingdom in the mornings – the Citizens of Main Street don’t do formal meets, and you never know who you’ll encounter!

You hopefully know that Magic Kingdom is not the same as Disneyland. However, did you realize that even rides with the same name can be very different experiences? Many attractions are twins with their counterparts in Anaheim, but a number are worth re-experiencing in Orlando. For example, Walt Disney World’s version of Space Mountain is a noticeably different experience from Space Mountain in Disneyland, and uses single-passenger seats, like the Matterhorn Bobsleds. Splash Mountain, on the other hand, has side-by-side seats in Walt Disney World. The queue areas for Walt Disney World’s versions of the Haunted Mansion and Star Tours are more involved than their Disneyland counterparts. And if you enjoy the Tower of Terror in Anaheim, be sure to try the version in Disney’s Hollywood Studios – they are not the same!

Make Time for the Unique Attractions, Too

However, Walt Disney World also has many attractions unique from Disneyland that you should try to fit in. The live animal attractions in Disney’s Animal Kingdom are unique to Walt Disney World, and this park really takes advantage of all the land available to it. Disneyland lacks anything like Kilimanjaro Safaris or the animal exhibit trails. Most of the stage shows in Walt Disney World, including Finding Nemo: the Musical, Festival of the Lion King, and Beauty and the Beast can only be found at that location. And if you enjoy parades and night spectaculars, all of those showing in Walt Disney World will be new to you (even Fantasmic! – they are very different shows from coast to coast).

Prepare to Be Blown Away

I love Disneyland – it’s compact, walkable, and oozes charm. It has Cars Land! And goats! But I have to admit that Walt Disney World is one of the most over-the-top immersive vacation experiences you can have. No theme park is perfect, but the “Disney bubble” that is possible in Orlando, from the ride on Disney’s Magical Express, to the hidden Mickeys tucked away in Walt Disney World resort rooms, to the stunning lakeside approach to Magic Kingdom and the vastness of Disney’s Animal Kingdom, is just breathtaking. Walt Disney’s “Florida project” was designed to be an escape from the real world for however long you are there, and you’ll have the best time if you approach it with an open mind and by embracing the experience. Let go of your preconceptions, and prepare to be amazed! And…maybe a little overheated.

FASTPASS and FastPass+: What’s the Difference? 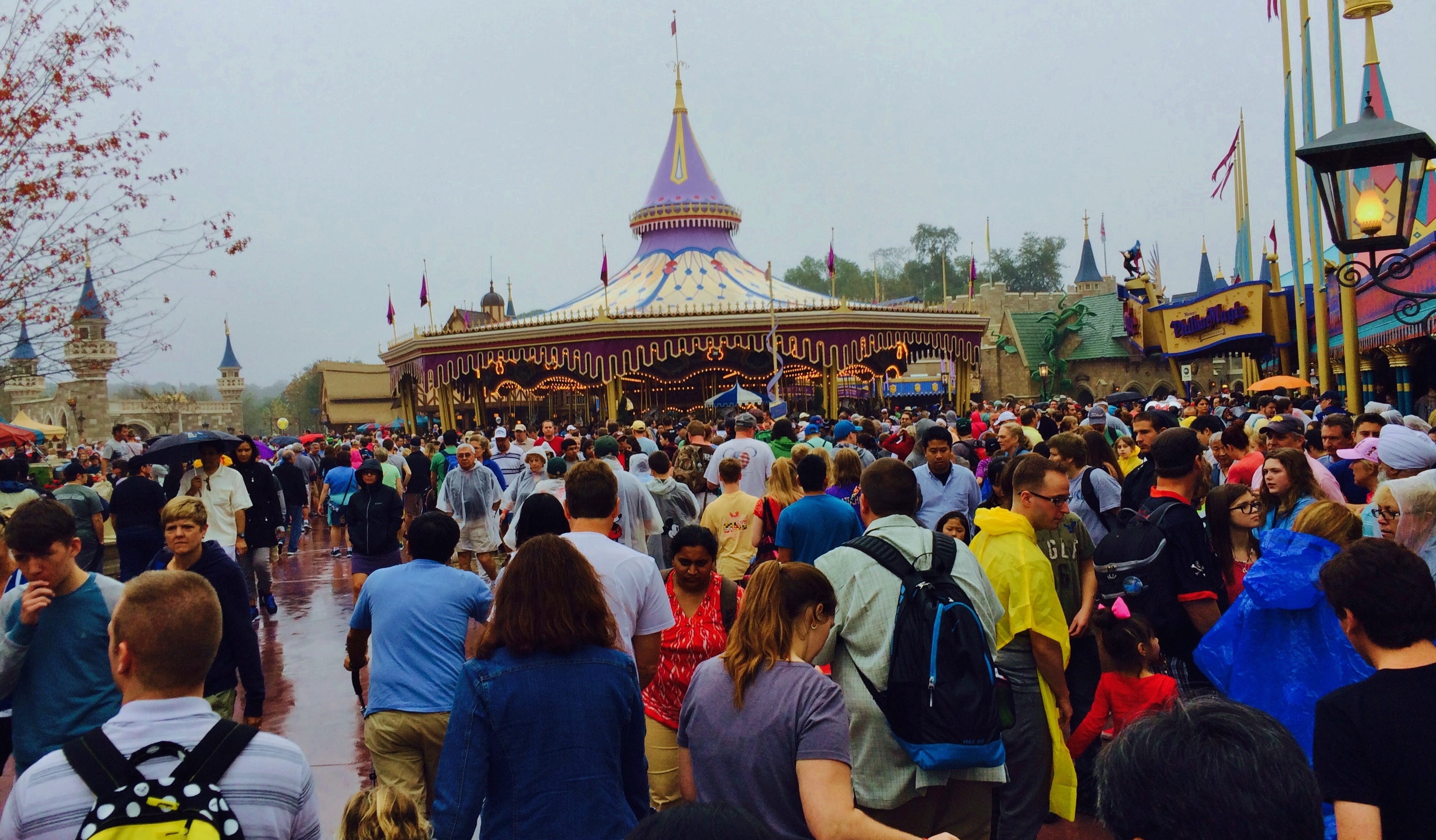 4 thoughts on “Disney World Preparation for the Disneyland Veteran”