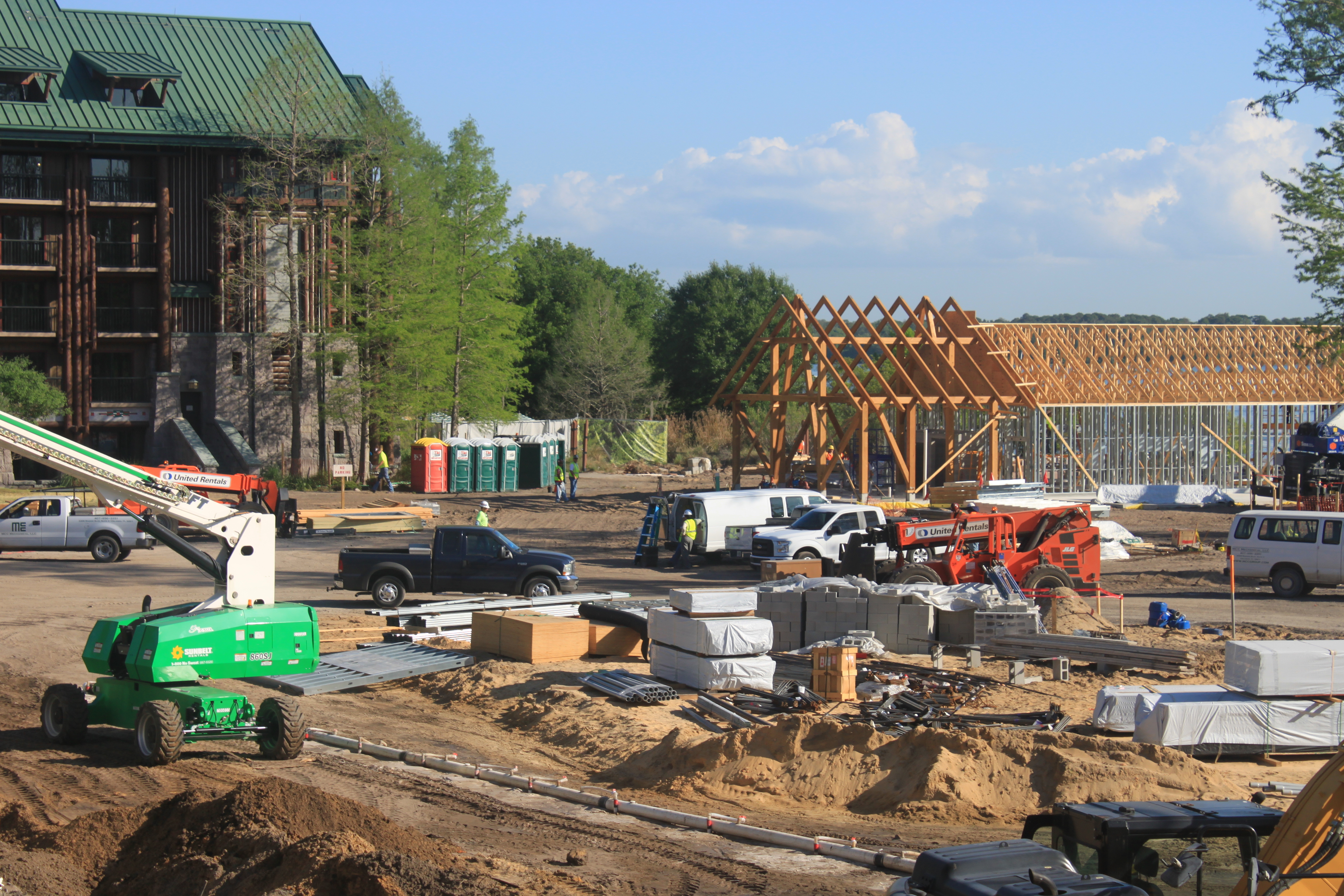 Eleven months ago (according to schedule), I was up bright and early and on the Disney Vacation Club website to secure a reservation for our family’s April vacation at our home resort, The Villas at Disney’s Wilderness Lodge. We love the serenity and atmosphere there as it gives us a beautiful setting to wind down before, between, or after touring the parks. And then it happened—DVC expansion!  Like many other guests, a flood of questions entered my mind. Will this affect my stay, how noisy will it be, how close will it be, will I still enjoy one of my favorite resorts?

Fast forward to our stay. The Wilderness Lodge lobby remains as beautiful as ever, and instantly I was “home.” No signs of construction there.

As we made the walk from the lobby to the villas building, we were feeling very apprehensive. In fact, based on multiple reports that the construction had turned the entire back side of the villas facing the lake into a construction zone, we had put in a request for a villa on the front side of the building. But when we got Disney’s text with our room number, it was for a room directly facing the construction. Turns out, though, Disney had our backs. As we approached the villas, there it was—scaffolding covering the entrance and extending to the front side of the building!

We had not realized or expected that there would be such extensive exterior renovations going on at the existing villas as well. Deep breath as we headed to and entered our room, which met all of our expectations and more. Also greeting us was a nice set of pins asking us to “Pardon Our Pixie Dust.” But the real test was looking outside. And then our outside view … Let’s be frank—the back of the Villas at Wilderness Lodge is currently a construction zone. The entire area is a sandbox dotted with construction vehicles and materials, and there are very few trees left behind the villas or the south wing of the main lodge. Disney is reportedly building waterside cabins as well as a number of villas. In fact, the entire south wing of the main lodge is closed and is being completely rebuilt inside. We asked several Cast Members what was going there, and they said they didn’t know for sure; however, it seems a good bet that it will include some villa accommodations.

In the end, the construction had very little effect on our stay. The work hours were kept to a reasonable schedule, and noise was not a factor during anything close to sleeping hours. We observed workers arriving on the site before 9 AM, but there was no construction noise until after 9 AM and the workday ended by 5 PM. As for the exterior renovations to the existing villas, the work we observed appeared to be taking place outside of some unoccupied villas at the back of the building (their doors were open during the day), and the scaffolding in the front of the building was being removed by the end of our visit.

The noise inside our villa when the slider was closed was very minimal, and I could probably have ignored the small amount of noise there was if I wanted an afternoon nap. In fact, we were even able to enjoy morning coffee or an afternoon glass of wine out on the balcony without issue, with the construction activity being a source of entertainment.  Also, our stay included a Saturday and Sunday, when there was no work activity.

As far as the main lodge, you can definitely hear a lot of construction noise from the pool area, but then again that is not the quietest place to head anyways. In addition to work behind the villas and the south wing of the lodge, there is work behind the north wing facing Magic Kingdom, presumably where there will be additional waterside cabins.

After getting over the initial shock of seeing all the expansion work, the Wilderness Lodge Villas turned out to be a terrific choice for our vacation. Our own villa was beautiful, and the villa lobby and other public rooms still had the feel of a quiet oasis. It will be interesting to see how the guest experience changes as construction progresses further into work on the cabins and other structures in back of the villas. The Disney World website currently says that the villa pool, beach, marina, and playground are planned to reopen in 2017.