Flying Fish at Disney’s BoardWalk Inn is currently seeing a complete rehash. Today, we have a first glimpse as to what we can expect when it reopens.

First, the popular signature restaurant will be loosing the Cafe part of the name and will now just be known as Flying Fish. In addition, when the restaurant reopens, diners will be welcomed to a sophisticated, interior that will pay homage to the golden era of seaside boardwalks.  (Quite fitting, don’t you think?) The interior has been refreshed and it will feature an all-new kitchen and dining room. The tone of the restaurant will be reminiscent of the sea with fantastic architectural accents and a gorgeous chandelier.

The new menu from Chef Tim Majoras will include dishes like seared yellow fin tuna served with compressed watermelon, paper-thin avocado slices, crisp radishes, pickled daikon and a small edible viola flower on top and the Fruits of the Sea appetizer which features rock shrimp and clams from Florida, grouper cheek, mussels, a splash of Brandy and a rich lobster stock served over celery root puree.

The restaurant will also now feature the all-new AbracadaBar lounge, which will take the place of the former Seashore Sweets.

The lounge’s backstory, which is fitting for the BoardWalk revolves around the fact that magicians and illusionists used this location as a secret stomping grounds. According to the Disney Parks Blog and BoardWalk lore, every single magician in the lounge vanished into thin air, never seen again… And after sitting vacant for nearly 70 years, the secret magician’s lounge has been resurrected. The bar will feature enchanted magic show posters, mystifying mirrors, vintage props and tricks. Ok…that sounds exceptionally cool!

It appears that when Flying Fish reopens at the end of the summer, it will be a great experience for Guests that you won’t want to miss. 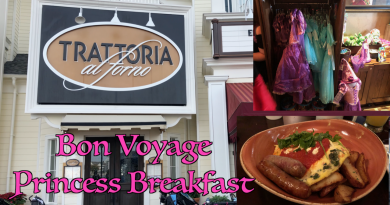