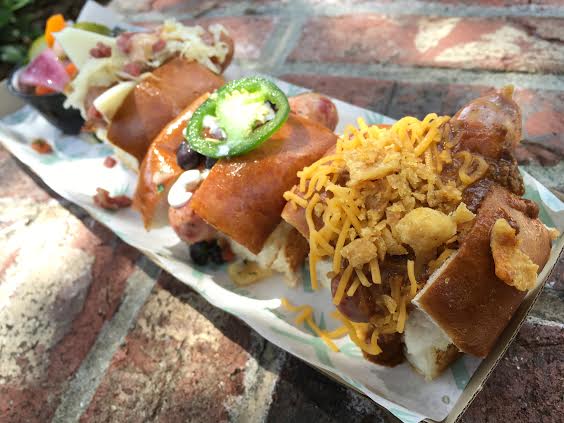 Last week, we took a glance at a few of the newest dining additions to Disney Springs, and this week I visit two more new locations offering up quick service meals in the Landing and Marketplace sections. My first stop of the day was at B.B. Wolf’s Sausage Co. (cute name, right?) for a quick bite for lunch. The stand, located at the beginning of the new bridge just near T-Rex Café and the LEGO Store, opens at 11:00 AM (though on this day, they were a bit slow to open – it was nearly 11:15 AM by the time the windows opened for ordering). I was greeted by a friendly Cast Member who took my order for a Three Little Pigs (serious credit to the person in charge of all these puns – a cute themed nod without being ridiculously over the top). Just like at Daily Poutine, I was told to stand off to the side whilst waiting for my food, and that I’d be called as soon as it was ready. After about ten minutes baking in the infernally hot summer sun (just like Daily Poutine – no shade around here), I received the most adorable cardboard tray of food ever. It was, admittedly, a little slow in service, but everything looked and smelled fantastic, so I wasn’t really upset by the wait. I opted to pass by the standing tables (like you see at Food & Wine) set up just across from B.B. Wolf’s and made a bee-line for the nearby shaded planters for some seating and a makeshift table; I later discovered this was a smoking area – it didn’t bother me, but something to keep in mind.

Unlike my cup of poutine, this wasn’t really eat-while-you-walk cuisine – the flimsy cardboard trays/plates make it difficult to transport this stuff very far, but after a few bites, I didn’t care about the transportability of my meal. The Three Little Pigs ($10.39) is a kind of sampler platter, with three smaller pork sausages wrapped in cut-down hot dog buns, each topped with a different set of accompaniments (though I found out from a Cast Member later in the day that you are welcome to request all three to be the same “flavor”, if you so choose). All three variations start with the same base sausage and bun, then differ only in the toppings. The sausage itself was mild in flavor, pork-based, not too fatty, and had a snappy casing – a perfect vehicle for nearly any savory accompaniment you could think of. The bun had been grilled to slightly crisp, and was decadently buttery and fluffy – definitely better than any standard Disney hot dog bun I’ve encountered.

The first variation is a take on a Reuben – the sausage is topped with a few dollops of Russian dressing, sauerkraut, crispy pieces of diced pastrami, and Swiss cheese. Each bite tended toward the sweet side with the Russian dressing and sauerkraut (same standard stuff you’d find at Casey’s Corner), but the diced pastrami really brought the savory punch to the party. The next flavor was the one I was a little confused by initially – black bean salsa with tomatoes, onions, and lots of cilantro drizzled with sour cream and topped with a slice of pickled jalapeno. I wasn’t sure how the salsa would play with an already heavy dish, but the acid in the salsa’s base really cut through the richness of the pork sausage and the buttery bun, and the sour cream was a perfect cool-down when you got a bite of the jalapeno (easy enough to remove from the sausage if you are spice-averse). The last variation was a simple chili cheese dog, made with standard Disney chili (again, just like at Casey’s), finely shredded cheddar cheese, and, in a nice nod to the southern classic Frito pie, topped with a few crumbles of Frito corn chips to give each bite a bit of crunch.

I usually don’t love Disney chili dogs, but the better quality bun and sausage here really ups the quality tenfold. Each sausage was about five bites, so between the three different flavors and the cup of pickles served on the side (perfectly pucker-inducing, lightly-cured crunchy cucumbers, onions, and yellow peppers), I felt satisfied after finishing the sampler without being over-the-top stuffed. For $11.07 including tax, I’d gladly come try this again – in the end, it wasn’t much more expensive than Daily Poutine around the corner and ultimately hit the spot for me, food-wise, though the wait for food here will be longer. Completing the trio of new quick service-style locations at Disney Springs, AristoCrepes (located at the other end of the bridge from B.B. Wolf’s, near Rainforest Café) offers sweet ($6.99) and savory ($8.99) crepes from 4:00 PM til 11:00 PM daily. The crepes are made at nearby Amorette’s Patisserie and brought over to be filled with any one of many flavor combinations. During my dinner stop, I decided to try two savory options and one dessert crepe to get a good taste of the overall menu. About fifteen minutes after ordering (and after receiving effusive apologies from everyone working there, despite not being upset about the wait at all!), I received three fairly large crepes in really cute, portable cardboard boxes. Just like B.B. Wolf’s and Daily Poutine, there’s no dedicated seating available here, and little shade, but if you’re lucky, you may find an empty table nearby along the water, just outside of Little Miss Matched.

First up, I tried the savory beef crepe, filled with slices of beef, shredded cheddar cheese, horseradish cream, pickled red onions, and arugula. The beef and cheddar were both on the salty side, as expected, but were offset by the sweetness of the red onions and the peppery arugula, with the horseradish cream providing a bit of background heat. The crepe was a bit dry at the top, but the majority of it was protected by the cardboard holster and remained perfectly fluffy. Overall, this crepe was pretty hearty and filling – it would be great as a lighter meal to snack on while wandering around Disney Springs, especially if you end up grabbing a dessert here or elsewhere to split with friends. Next up, I tried the only savory vegetarian crepe on the menu, filled with beets, goat cheese, arugula, walnuts, and a few pickled onions. If you’ve ever had the joy of sampling the beet salad over at Epcot’s Sunshine Seasons, this crepe is pretty similar in flavor – sweet beets with tangy goat cheese spread all over the crepe. I have to admit – this was a lot better than most generic veggie dish options I’ve sampled at Walt Disney World. It was almost like eating a signature restaurant’s salad in a crepe (for about the same price). This wasn’t quite as filling as the beef crepe, but it was still stuffed to the top and very tasty (though admittedly, earthy beets aren’t for everyone, so your mileage may vary). I capped off the meal by tasting the key lime cheesecake crepe. I was fearful of this – usually key lime desserts come in some unnatural shade of green and rarely taste like lime, but this impressed me with tons of visible flecks of lime zest in a not-green creamy cheesecake pudding, with crunchy deep-fried pieces of pound cake providing a bit of textural variety and heft to the dish. Overall, it tended a bit sweet for me, but I definitely wouldn’t say no to ordering this again, and it was a great ending to my meal, especially considering the price for the amount of filling

Based on these two meals, I’ll be adding both B.B. Wolf’s and AristoCrepes to my Disney Springs dining rotation. It would be pretty easy to juggle two AristoCrepes varieties (one sweet, one savory) or grab any of the items on B.B. Wolf’s menu to make a full meal for a decent value, and it definitely wouldn’t disappoint. Overall, this is reasonably high quality food (for the price) with great menu variety compared to most quick service locations around Walt Disney World. Compared to locations I tried last week, I’d probably stop by either of these two again before going back for more poutine, and though I liked D-Luxe Burger’s food, these two both come in at a lower price tag for an equally satisfying meal. No matter how you slice it, though, it’s great to see even more options for quick and tasty meals at Disney Springs that won’t break the bank. 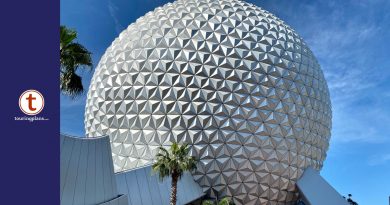 How to Plan a Split Stay for Your Disney World Vacation