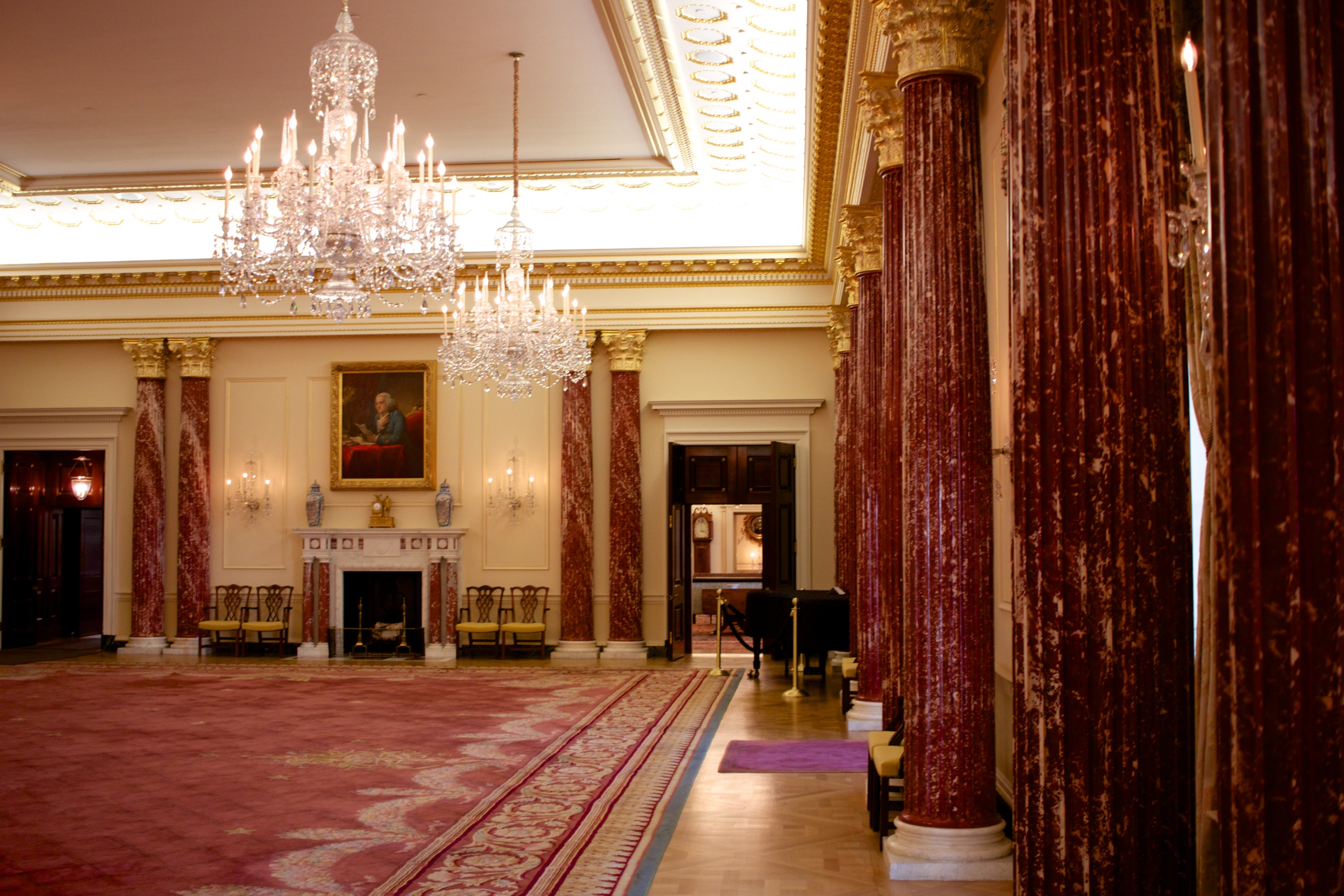 There are many, many (many!) tourist attractions in Washington, D.C. and we will eventually get to just about all of them on this blog (whether you like it or not). In honor the recent release of the all-new Unofficial Guide to Washington, D.C., I’ve decided to highlight a tour that we found to be both excellent and altogether surprising: The Diplomatic Rooms at the United States Department of State.

The State Department resides within a gigantic, blocky building in D.C.’s Foggy Bottom district and the exterior does not divulge the spectacular rooms within. You are asked to arrive 30 minutes early in order to make it through security and let me tell you that they will not delay the tour. Len, Laurel, and I underestimated the distance we needed to walk and got to the security shed about 5 minutes prior to our tour time. There was a tense few minutes where the security staff had to make a few calls to see if we’d be allowed in. Luckily our collective charm won them over and we made it in.

Much like walking up to the building, the initial foray in the foyer doesn’t make it seem special either. A typical government building entry and sterile hallway is where you meet the group. From there you are brought up to the top floor of the building where everything changes.

Exiting the elevator takes you into what looks like a cross between an elegant hotel and a museum. From there a guide walks you through each of the six rooms explaining each of the many, many antique pieces on display. Most are American made and many are pre-revolution. Unfortunately none of the pieces had museum-style placards to photograph and I didn’t take notes, so I cannot describe many specifics. I can tell you though, that most of what these rooms hold range from very expensive to priceless.

The tour begins in the Entrance Hall that is based on the interiors of Carter’s Grove and Westover, two Georgian plantation houses in Virginia. Unfortunately I don’t have photos of the Entrance Hall, partially because it was hard to take photos of the small room with the group in there, partially because I’m a dummy and sometimes forget I’m carrying a camera. Anyway, from there, you head into the generically named Gallery with its anything-but-generic decorations. The furniture is American Queen Anne and Chippendale with an emphasis on blockfront furniture by John Townsend and John Goddard of Newport, Rhode Island. On the floor is a Baktiari rug (from around 1910) and a rug from northwest Persia (around 1900), so don’t go spilling the drink you’re not allowed to have.

Next up is the room that I thought would be the most impressive (I was wrong)–The John Quincy Adams State Drawing Room. In addition to the dozens of pieces of antique furniture in this room is porcelain owned by George Washington. The most impressive piece in the room, however, is a writing desk. This particular desk was THE desk where the 1783 Treaty of Paris was signed by John Adams, Benjamin Franklin, and John Jay thus officially ending the American Revolutionary War. Following that moment, the desk went to live with Thomas Jefferson and now you can get close enough to smell it.

This is a good time to mention that getting too close to anything you shouldn’t on this tour is not a great idea. Not only is it disrespectful–it may be dangerous…to you. The entirety of the tour was flanked by two armed guards, one leading us and one behind. At no point were we allowed out of their sight and, although I am a bit of a joker, I was not eager to find out their reaction if I sat in one of the chairs.

The second-to-last of the major rooms is The Thomas Jefferson State Reception Room, which is “considered to be a masterpiece of neoclassic design with perfect proportions, a Doric entablature, pedimented glass doors, triple-sash windows, and an 18th-century Cararra marble mantle.” That is according to the very informative State Department website. Like all of the rooms, the art, furniture, and adornments are gorgeous and historic. It was hard at this point not to be looking into the next room…

The Benjamin Franklin State Dining Room is where all major State Department events are held and it is shockingly regal. It is liberally gilded, flanked with Corinthian columns, and anchored by a 1767 portrait of Benjamin Franklin. Both the carpet and the ceiling feature the Great Seal of the United States and eight cut-glass chandeliers hang overhead. I can’t even imagine the nerve it takes to walk around this beautiful room carrying food and drink.

If you are visiting Washington, D.C. I cannot recommend the State Department Diplomatic rooms enough–especially if you’re looking for something a little off the beaten path. Tours are offered Monday through Friday at either 9:30am, 10:30am, or 2:45pm and can be reserved via the State Department website.