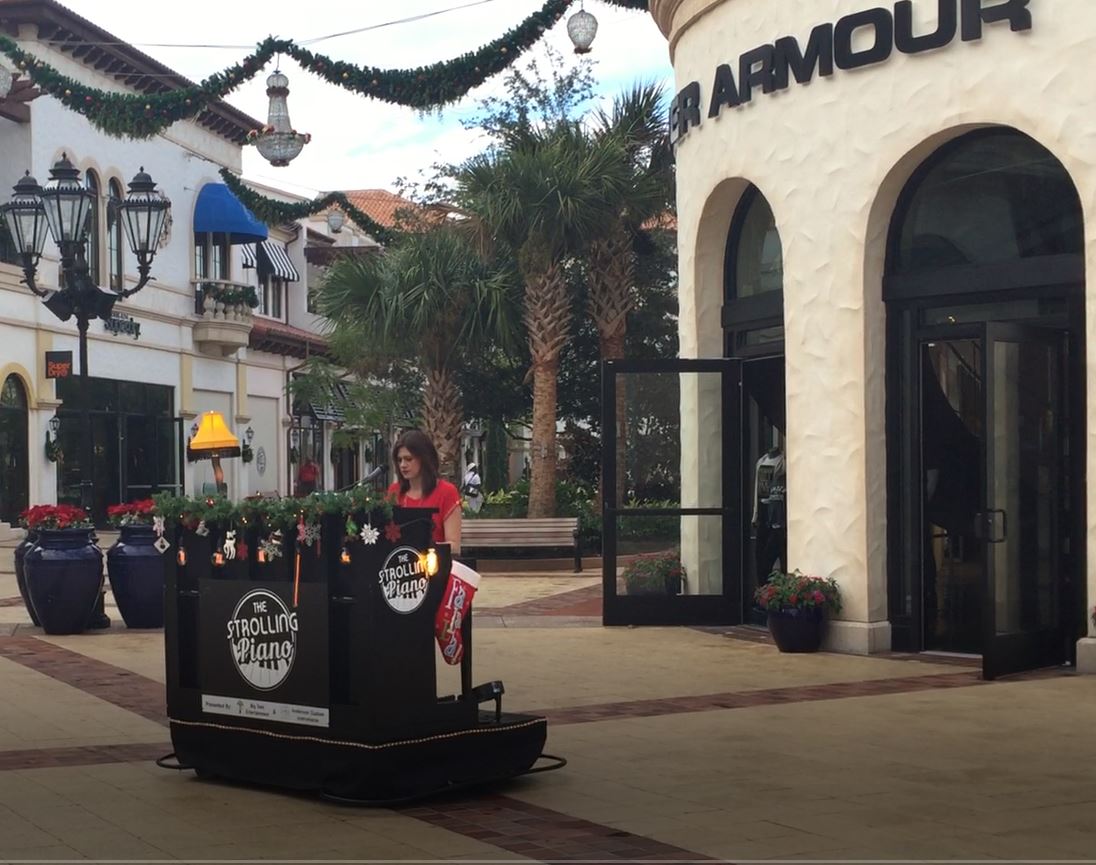 This year, with a wide variety of new stores opening throughout Disney Springs, it wasn’t a huge surprise that Disney Springs announced that it would be getting into the holiday shopping spirit with its own Black Friday sales.

In conversations with one of the merchants, the consensus was that neither the merchants nor Disney had any idea whether or not this would be successful. And although I’m anti-crowds and an anti-“stuff” semi-minimalist, I wanted to see exactly how Black Friday at Disney Springs would compare with the stories you see on the news. Full disclaimer: I have never door-busted any stores for Black Friday in my life, but have had a few years of experience as a sales floor manager at Target way back in my youth and got to see the best and the worst of Black Friday behavior. There were a couple items that I was looking to purchase for some family members this year, and so if I could get a small discount on them, I’d be happy with that as well. Just to say we’ve had the experience, we decided to rope drop the Black Friday event at Disney Springs.

We left the house at 7:30 AM, planning to be at Disney Springs 10-15 minutes before their 8 AM opening. As we rounded the corner to the Lime Garage, the large number of parking spaces available gave some indication of how things would go. Parking on Level 2, there were only a handful of cars. It was pretty clear that we wouldn’t be fighting through crowds at this Black Friday locale. I had perused the list of deals earlier in the week, and most seemed to be fairly standard sales of 20-40% off select merchandise, and hints that there would be doorbuster deals at some stores. One deal that jumped out was that for the first 50 people at American Threads, they would get a free sweater. I joked with my husband that we should walk over there and see how many people were lined up for that. When we arrived at 10 minutes before the doors opened, there were only a couple people in line. We got in line, and got vouchers 16, 17, and 18. Granted, the sweaters only came in olive green or black and were only available in Small or Medium (although the Medium fit me just fine, except for being a little tight in the arms–and typically I wear an XL, so I know the sizing was a bit off), but free is free, and we didn’t have to wait more than 10 minutes. That gives some idea of how minimal the crowds were. Overall, you’re getting the same kind of discounts that you would for Black Friday at your typical mall, but there are next to no crowds. In other words, these are Black Friday sales for people who hate Black Friday shopping.

There were a couple exceptions to this rule–the Disney stores (World of Disney and Marketplace Co-op) and the Lego store. World of Disney had published their list of specials, some of which seemed to be akin to the merchandise that you would find at the Character Warehouse outlet stores. The big hits of the day were the $10 Olaf Pillow Pet and the $25 Vera Bradley Midnight with Mickey Hipster Bag. The Lego store hadn’t really published their deals through Disney, but they had indicated that there would be select merchandise at up to 50% off. When we finally made our way to the Lego store around 8:30 AM, there were still a variety of 50% off merchandise offerings on the shelves. The lines were lengthy, and many people had armfuls of merchandise that they had already cleared off of shelves, but they moved quickly, and the only set that people seemed to be disappointed that it was sold out was the Lego White House Architecture series set.

One other offering that was noted was the inclusion of breakfast at some locations that don’t typically serve breakfast. For example, breakfast was to be offered at the Food Trucks at Exposition Park, Frontera Cocina, and Bongos Express. Looking at Frontera and Bongos, there didn’t appear to be a special breakfast menu that we could see from the menus posted outside, and it didn’t look like the Food Trucks were open, even at 10 AM. The opening of Dockside Margaritas at such an early hour was a welcome sight for many, and there was even a lot of appeal for some with The Daily Poutine’s “Breakfast Poutine”. (We opted for our old reliable Wolfgang Puck Express, which has a pretty awesome breakfast menu and is rarely crowded.)

Many years ago, Animal Kingdom did a series of commercials to try and explain that Disney’s Animal Kingdom was “Nahtazu”. Somehow, Disney Springs is trying to create itself as “NahtaMall”. Sure, there are lots of stores that you find at similar malls (including Orlando’s plethora of outlet malls), but Disney is trying to make Disney Springs into something more than a mall, and I personally believe they have succeeded remarkably well. Yes, the main focus for this morning was shopping, but there were some added touches that made it seem like something more than a day at the mall. Case in point, as we rounded the corner, we came across a “strolling” piano. (Or, as one person observed, almost like a piano on a Roomba. It was unique and different and somewhat odd seeing it traveling around the empty sidewalks.

Another offering was free admission into DisneyQuest until 11:30 AM, with the caveat that the only things operational in there would be the arcade games. (So no Pirates of the Caribbean, Buzz Lightyear AstroBlasters, or CyberSpaceMountain and no food offerings, for instance.) It was a great way to show our daughter around DisneyQuest and let her watch her parents geek out over playing a round on the arcade version of Bubble Bobble. It also gave us a great opportunity to see how much has changed in the years since we’ve been there. (I’m taking the Thumper pledge about that, with the “If you can’t say something nice…”)

Also getting into the theme for the day, Sprinkles offered a Black Velvet cupcake–impossibly rich dark chocolate.

Overall, I think that the people who were out shopping for the day likely got some good deals, and we had a really enjoyable morning. By the time we left at noon, as crowds were starting to pick up, we had enjoyed our time and accomplished everything we set out to do. We also didn’t feel exhausted from dealing with large crowds. On the other hand, I think that merchants were likely disappointed with the turnout on Friday morning. It was no different than a normal Friday at Disney Springs in terms of crowds. Perhaps Disney Springs would succeed better attracting the crowds if they kept to their normal 10 AM opening time and offer the doorbusters at that time. That said, every hour you wait to open on Black Friday is another hour that some other store is taking money from those shoppers who might decide they spent enough of have enough and not show up at your establishments.

In the end, Disney Springs needs to employ a few more techniques to really build the crowds for Black Friday. Encourage stores to have clearly advertised doorbusters, including free items (and dare I say it… lost leaders). Advertise earlier so that people know this is a shopping option before they’ve already made other plans. And the one thing that Disney Springs did absolutely right and should continue in the future is making it so that the trip to Disney Springs is an experience in itself. Things like the strolling piano and DisneyQuest admission helped make this more special than a trip to the mall. More offerings like that would make people want to come, even if they are like me–a person who doesn’t do Black Friday. Bring some Streetmosphere entertainers to the shopping area as they interact with other shoppers. Offer a program where, if you spend a certain amount, you get a percentage off at one of the awesome sit-down restaurants.

Will I be back next year? Most likely–if nothing more, the Lego store deals were fantastic. As long as the crowds stay low, it is certainly a great way to spend a Black Friday experience. That said, if it starts getting more popular, I’ll likely skip the deals and shop from the comfort of my home–or maybe just show up for one more round of air hockey or giant Tetris at DisneyQuest while everyone else shops.

7 thoughts on “A Recap of Black Friday at Disney Springs: Boom or Bust?”