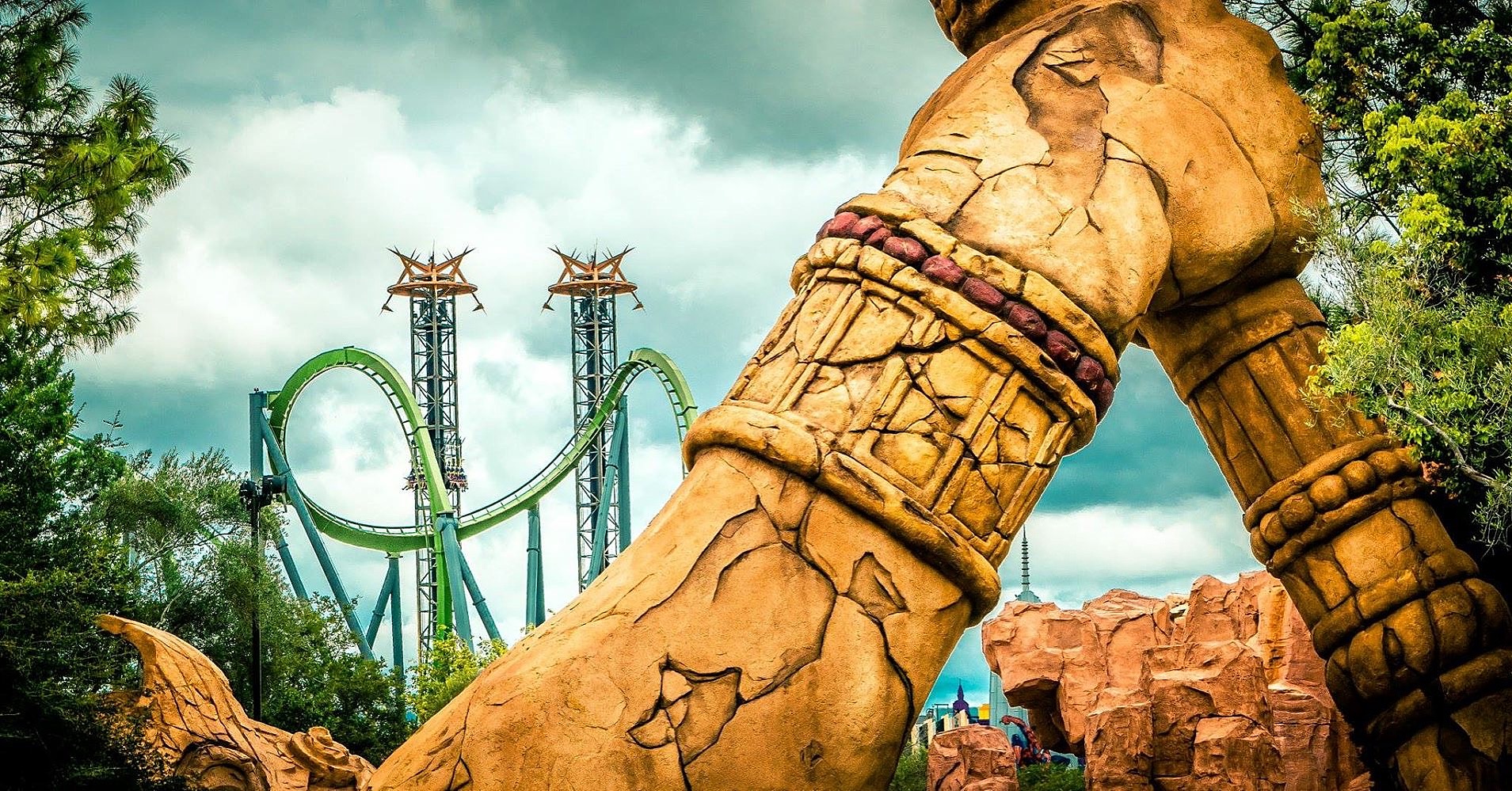 This week’s SATURDAY SIX takes a look at the Six Lowest-Rated Attractions at the Universal Orlando Resort! That’s right, this week we finish off our month long look at some interesting survey results courtesy of TouringPlans readers. Previously we’ve checked out the highest-rated rides, shows and spectaculars at Walt Disney World, along with The Mouse House’s lowest-rated attractions. Last week we checked out the best of the best at Universal Orlando, and this week we’re going to look at the other side of the coin. One thing to note is that there are some attractions that probably should have made this list – such as the Flying Fish Market show at USF – but they did not receive enough survey results to qualify. I was really surprised by some of these results, so let’s kickoff the countdown with…

Various elements of the show can be corny, no doubt, but the final battle is fun to watch play out in a larger than life setting. There is nothing like Poseidon’s Fury anywhere else in the theme park world, and it is just the type of show that could be used over in Diagon Alley for the long rumored Ministry of Magic attraction that would go where Fear Factor Live currently stands.

While I would consider Poseidon’s Fury at the top of my list of most underrated attractions at Universal, I can see why some would rate it poorly. It isn’t until the water tunnel reveal and the last act before the show gets really good. The whole experience is a relatively passive one, especially for modern audiences. As we mentioned, the camp factor is also very high. You’re watching an epic battle between good and evil in which one of the characters is named Lord Darkenon (apparently Taser Face was already taken.)

Some of the comments we received after the highest-rated Universal attractions article was that it was too “Potter heavy,” with implications that fans of Harry Potter just rate everything high because they like the brand. However, not only did one Wizarding World attraction make the lowest-rated list, two others were not far off from joining it. I think this should dispel any thoughts of a “Potter bump,” and shows that all the attractions at the Wizarding World are based on their own merit.

And speaking of merit – or lack of -the Tri-Wizard Spirit Rally at Hogsmeade Village stinks.

I can make a case for the Frog Choir at Hogsmeade Village, as there are some fun songs and you gotta love anytime Disney or Universal use puppets in the theme park. The Tri-Wizard Spirit Rally has students of Beauxbatons Academy of Magic and the Durmstrang Institute performing rhythmic gymnastics and other forms of jumping around. Even in the Harry Potter and the Goblet of Fire film they had to add special effects in order to make this sort of stuff interesting. Worst of all, the staging area is placed in a area that causes a complete bottleneck for people coming and going from Forbidden Journey. With Dragon Challenge leaving, Universal at the very least needs to push this show farther back in the walk way, or better yet just try for something completely different (such as the great wand show out in Universal Japan.)

Actually, I get it. Even though from queue to gift shop, The Simpsons Ride is one of my favorite experiences on property, that is being said from a die-hard Simpsons fan. Looking at it objectively, the outdoor portion of the queue can be a killer, especially if you’re in an area where you can’t watch the clips on TV (which contains exclusive new gags from The Simpsons mixed in with classic theme park moments from the show.) I have heard several complaints from guests about the ride vehicle being uncomfortable when it moves you around, and others end up feeling a little queasy between the movement and the larger-than-life screen in front of them.

The jokes on the ride are fantastic. It sends up the entire theme park world and was clearly written by people by who love theme parks like us. The queue and pre-shows are filled with hilarious details as well.

I have a feeling that a percentage of guests who give the Jurassic Park Discovery Center a low score don’t actually experience the actual attraction. I think many walk into the upstairs area (which is off the path between Jurassic Park and the Wizarding World) see a quick service burger restaurant and a gift shop and think, “that’s it?” Downstairs is where all the neat stuff in the Discovery Center resides.

An interactive area for kids, the Discovery Center does offer some fun elements for fans of the original Steven Speilberg film. The best of which is an exhibit where guests get to see an animatronic raptor being hatched. Mr. DNA is around to walk you through an experience where guests fuse their DNA with one from a dinosaur to see what the resulting creature would be. Our Pro Tip is to go outside from the bottom level of the Discovery Center and take advantage of the incredible view. It is also a nice area to get away from the crowds because there is usually no one around. In fact, that’s a tip for several of the “islands,” especially Toon Lagoon, where there are a bunch of fun designs that almost nobody ever sees because they don’t take the time to go back in that area.

As stunt shows go, Sindbad is not a great one. All the quality humor, top notch action, and actual thrills that you would get at a show like the Indiana Jones Stunt Spectacular! at Disney’s Hollywood Studios is completely missing from Sindbad. The show has received poor ratings from guests for a long time, and inexplicably Sindbad took a rather long refurbishment in 2015 only to come back as pretty much the exact same show. This is reminiscent of Disney putting a $1,000,000 into the kitchen of Pizzerizzo only to serve the exact same crappy food that Pizza Planet offered.

The set looks great. To steal a line from Bobby “the Brain” Heenan, it has a million dollar body and a ten cent brain. If you like rather loud explosions done fairly often, you just may enjoy Sindbad while the rest of us start suffering from the onset of PTSD. The shows script tries to be both serious and silly and just doesn’t do either well.

I have to admit I did not see this coming. One thing to note about all of our ratings so far, from Disney AND Universal, is that almost everything scored a 3/5 or higher. I attribute that to most surveys being taken right as people coming back from their trip to the parks and are still on their “honeymoon period.” You just had a great time with your family in two wildly popular theme park resorts, so its only natural to possibly over grade some things because you’re still on a vacation high with some wonderful memories. So when attractions score in the mid 2s – like Stitch’s Great Escape at the Magic Kingdom – it means guests really didn’t like it.

For me – a giant movie fan – Universal Cinematic Spectacular is solid. It is definitely not in the same stratosphere of quality that some of Disney’s nighttime spectaculars are (such as Happily Ever After and Fantasmic!) but it is pleasant enough. One thing I really enjoy about it is that you don’t have to camp out for 45 minutes to get a good viewing area. You can actually just go to the lagoon right before the show starts and be absolutely fine.

Cinematic Spectacular is a montage of the best Universal films of the last 100+ years (including E.T., Jurassic Park, Jaws, Back to the Future, Gladiator, and Pyscho.) Narrated by Morgan Freeman, maybe the fact that the show tries to appeal to so many different people (sections that include films like Despicable Me, Cape Fear, and – almost too good to be true – Army of Darkness) that maybe it becomes a turn-off to many. The show contains water elements, lasers, and junior fireworks for some pyro and ballyhoo. C’mon, it has The Last Starfighter, you gotta score it over 3 for that alone people!

So there you have it: The Six Lowest-Rated Attractions at Universal! See you next weekend for the latest installment of the SATURDAY SIX, where we’ll look at something fun from the world of Disney and Universal. If you enjoyed yourself, be sure to check out The Magic, The Memories, and Merch! articles, or, for your listening pleasure, check out the E-Ticket Report podcast. You can also follow Your Humble Author on Twitter (@derekburgan).

The WORST Places to Propose at WDW: A SATURDAY SIX Investigative Report

Six AMAZING Details in Disney’s Pandora: The World of Avatar

Special Thanks to crack staff photographer Brandon Glover, photo wunderkind Mike Sperduto, my personal protege Hunter “Elvey” Underwood, hot shot Michael Carelli, the sommelier of Tony’s Town Square Brian Carey, The East Coast “Godfather” of Inside Universal Bri-Man, and blogger to the stars Megan Stump for their invaluable assistance with this article. Be sure to also check out Brandon on The Park Blogger podcast with goofballs co-hosts Aengus Mackenzie and LitemAndHyde , while fellow Potterheads may enjoy Meg’s work on the Central Florida Slug Club.

9 thoughts on “SATURDAY SIX: The 6 Lowest-Rated Attractions at the Universal Orlando Resort”